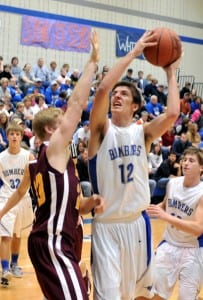 EDON – The last time that the Edgerton Bulldogs came up on the wrong end of a final score was last year. Despite the fact that they were running on a ten-game winning streak as they traveled into Bomber Country on January 26, hope springs eternal in the friendly confines of The Hangar.

On this night, the Boys in Bomber Blue were able to hang close for the first period, but second and third period flameouts proved to be their undoing as the Bulldogs took a single-digit lead and turned it into a rout as they went home with a 59-36 win.

Field goals from Brock Thiel, Reid Bowling, Jake Brown and Mike Peeples kept the hometown boys within six as the first period ended. The difference came in the second and third though, as Edgerton went on a 32-15 run to douse the Bombers’ lights.

Peeples finished with a team leading 10 for the Bombers, while Thiel posted 7 points and Brown 6. Alex Kirkingburg came off the bench to put in 5 points, Bowling finished with 4 points, and Clay Parrish and Kaden Sapp each dropped a deuce.