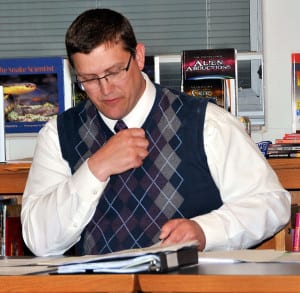 CONSENT AGENDA … Superintendent Ed Ewers presents the monthly Consent Agenda during the April 2013 meeting of the Edon Northwest Local Board of Education.

In addition to addressing routine business brought before them, members of the Edon Northwest Local Board of Education were updated on progress with discharging the District’s Safety Plan during their regular monthly session held Tuesday, April 9, 2013 in the Edon Schools Media Center. President Jill Jacoby called the meeting to order with all members in attendance.
[emember_protected custom_msg=”Full content protected for online subscribers. Purchase a one week subscription from the top menu bar for just $1.99 to read all online content (full access). Longer subscription plans are also available. Subscriptions cover our costs to attend local events; bringing forth Hometown News Coverage to our communities.”]
“This afternoon, I received a phone call and we will have a two-hour delay in mid-May to begin training our staff,” began Superintendent Ed Ewers. “Done in cooperation with local and regional law enforcement, this will be our next step in implementing the District Safety Plan.” (Use of firearms is not involved with the strategy being taught.) Once in place, training sessions to help parents and students fully understand the expectations and procedures of staying safe will be held at the onset of the 2013-2014 school year.

As outlined in March, Ewers again shared how cooperation over recent months with law enforcement agencies led to the development of training strategies that present a different approach to potential threats. For years, responses were more on the static – lockdown, hide, wait and stay in place. With new strategies now being presented across the State of Ohio, the District needs to begin taking a more active role ~ not necessarily an aggressive approach ~ in protecting its students. Completed training will enable the staff and students to eventually learn how to be more proactive in their own safety.

Superintendent Ewers related changes at the elementary entrance and parking lot would soon be underway as well. “Currently, there are not enough parking spaces in the elementary drop-off and pick-up area [to accommodate traffic],” he noted. “Our goal is to alleviate some of that congestion and resolve the confusion of trying to pull into the present circle drive.” A crosswalk from the elementary wing to newly designated parking spaces nearby will create an all-around workable option for everyone. “This will allow parents to stay in their cars while a crossing guard [will assist] students in walking back and forth from the parking lot.”

The project, slightly more extensive than first thought, will move right along with other Safety Plan features. “Once in place, doors will be locked until 7:35 a.m. and locked again once classes start; they will remain that way for the rest of the day,” stated Ewers. “Again visitors entering the building will need to sign-in at the office and to wear a visitor’s badge while in the building.”

Although there are security changes occurring within the District, objectives of its updated Safety Plan remain well-defined. If you need additional information regarding this plan, feel free to contact Superintendent Ewers or visit the website at www.edon.k12.oh.us.

Highlights from April’s Board Reports included:

The Edon Northwest Local Board of Education will next meet Tuesday, May 14, 2013 in the school’s Media Center beginning at 6:30 p.m.[/emember_protected]