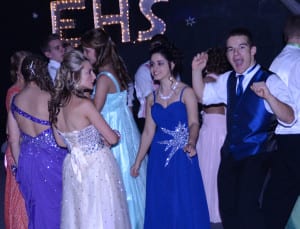 The Edon High School gym was abuzz, as parents, friends, and neighbors, filled the stands last Saturday.  Rather than a volleyball or basketball game, however, those in attendance had instead come to witness the arrival of the 2015 Edon Prom attendees.

As the “Blue Carpet Affair| theme would imply, each couple walked down a luxurious lane of blue, with illustrious decorations and a classy atmosphere accompanying them all the while.  Parents played their part, snapping picture after picture as their children stopped at one of three stations set up for photography, obtaining evidence that their kids do in fact know how to dress up.

Upon the completion of Social Hour, the Prom guests made their way down the hall to the auditeria, where they waited patiently for the evening meal to be served.  Junior Class President Kaitlyn Sonneberger took that opportunity to read a brief address she had written on behalf of her class, who happened to put most of the work into putting the event together.  Sonneberger called on those in attendance to remember the good times over the years, as a large portion of the group would be graduating in less than a month.  A video accompanied the speech, reflecting on some of those happiest days of yesteryear.

The dance itself came next.  The couples hit the dance floor pretty much immediately, wasting no time in embracing the fun of the night.  Laughter, silliness, and romance were all in abundance with the unique ambiance of the evening.

A new edition was added to the Edon Post-Prom roster, as hypnotist Jack Fraylick and crew kicked things off with a very engaging show.  Hypnotizing various members of the crowd, Fraylick simulated a number of scenarios inside their suggestive minds, leading to some rather hilarious moments.

Inflatables were also present at Post-Prom.  Students could use a velcro suit to stick to a wall, or horse around inside another inflatable, complete with a slide.  Laser tag was also available to play, with the auxiliary gym being transformed into an arena of sorts.  Prizes were raffled off as these events were taking place.

T.J. Hug can be reached at publisher@thevillagereporter.com.