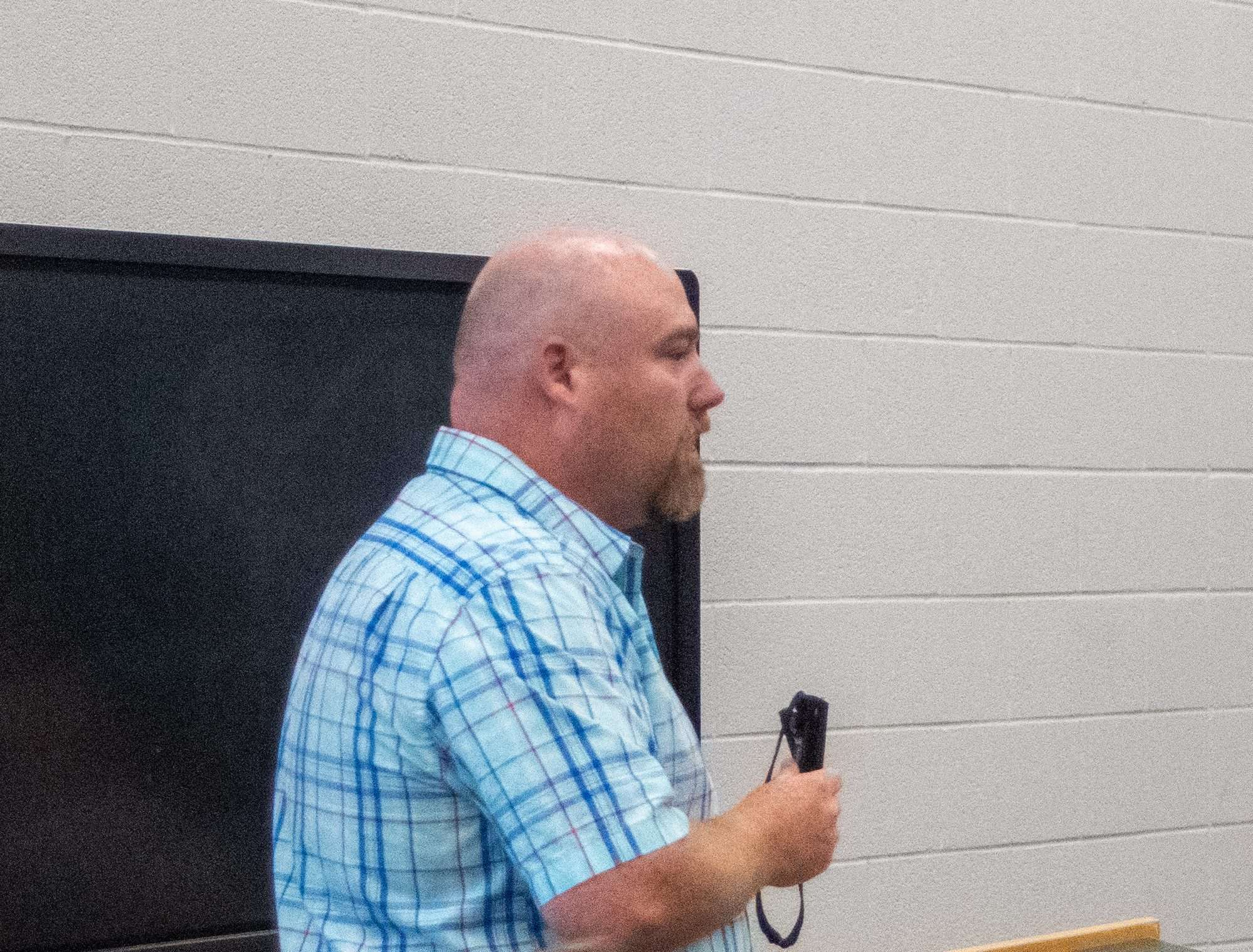 BRYON HANSEL … Bryon Hansel, the President of the Mini Viking Parents Association, addressed the Evergreen School Board with three different proposals regarding the Elementary. (PHOTO BY JACOB KESSLER, STAFF)

The Evergreen School Board held their meeting on Monday, September 20th. The meeting was called to order at 6:00 p.m. followed by the Pledge of Allegiance.

The board first moved to approve the minutes from the August 16th meeting followed by the hearing of correspondence from the Ohio Music Education Association. The correspondence was to notify the district that Owen Cromly and Kyle Feeback were selected as members of the All-State Choir. The two will be performing at the state conference later this year.

The board then heard from Bryon Hansel who is the Mini Viking Parents President. Mr. Hansel proposed several projects to the board. The first project proposed was to add a Gaga Ball pit to the playground at the Elementary School.

He explained Gaga Ball as a hexagonal slash four square set up with a big ball in the middle that kids use to play dodge ball or tag with. Another project is almost complete in regard to the placement of signs decorated with a Viking head onto the shelter house by the school.

Another project was put forward to get rid of any dead trees around the Elementary and replace them with new trees. The idea of planting trees near the playground to act as a wind break was also put forward.

Lastly, the topic of there being no sense of school spirit on the north side of the building was touched on. The idea was given to place some sort of sculpture there to help with that. The board agreed with the ideas and stated to work on the gaga ball pit and trees first.

The board then moved to hear the treasurers report. State funding will be getting cut for the district, but expenses will also be getting cut. The good news is that the rate will be pretty much the same for both, so the numbers should even out.

The board then moved to accept a $100 anonymous donation to the Student Assistance Fund. Approval was also given for the ARP IDEA Elementary & Secondary School Emergency Relief grant for $50,077.95 as well as the ARP Childhood Special Education grant for $4,225.86.

Resignations were then accepted from Elizabeth Zeiler who was a Paraprofessional and Michael Smith who was a Mechanic. Paula Wozniak was also approved to be a substitute Speech Pathologist for the 2021-2022 school year.

Samantha Cols was then offered a one-year supplemental contract for the 2021-2022 school year as a paraprofessional.

The board then approved all Evergreen teachers for the 2021-2022 school year at a rate of $27.50 per hour followed by approval for the education option program administered by the Wood County Educational Service Center for the Wood County Juvenile Detention Center, the Juvenile Residential Center of Northwest Ohio and the Wood County Alternative School.

Discussions then took place regarding the income tax levy that is expiring. The levy will be expiring next near in December. It was brought to everyone’s attention in order to start the process now.

More discussions then took place regarding the drug testing policies, the cancellation of the JV Football program for the remainder of the year, and a technology report.

Administrative reports then followed. Field trips will be resuming this year and the Fire Department will be coming to the Elementary School to teach fire safety. Parent teacher conferences will be taking place on October 6th and 7th.

The Homecoming is this week, and the theme is Light Up The Night which was voted on by student council. ACT testing will be taking place soon for those that registered.

The NWOAL held an emergency vote last week to approve Girls Golf as a league sport for the first time. COVID numbers have gone up since the fair in both the county and the school but appear as of now to be leveling off once again.

Contact tracing is being kept with the Health Department and the ability to go remote is available if needed. The athletic construction and renovation project is going on as scheduled with the roof installation scheduled to take place in November.

If all goes well occupancy for project A should take place in January with project B being completed around April. The board then moved into executive session at 6:55 p.m. With no decisions being made, upon return the board moved to adjourn for the evening.