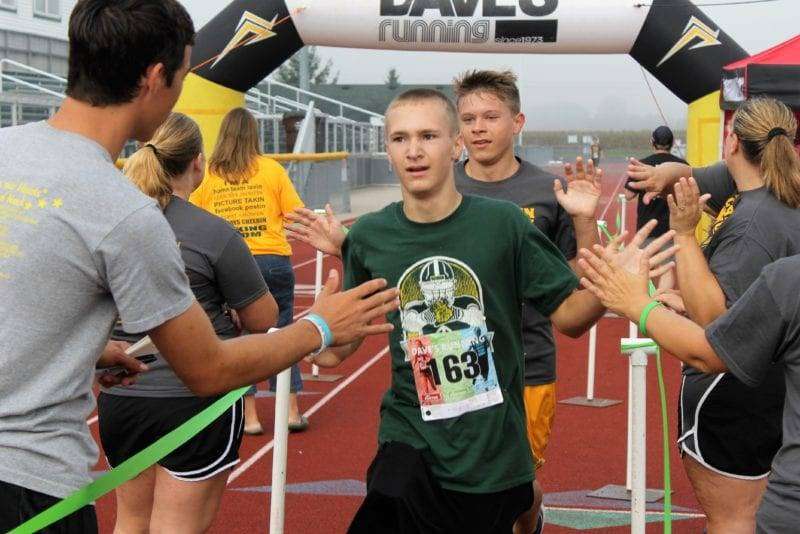 The Evergreen School District held its eleventh consecutive Trot for a Track event this past Sunday morning to help raise funds for its track program. With registration beginning at 8:00 AM, approximately 155 participants gathered at the football/track stadium to run in either the 5k race or the one-mile fun run.

While hopping out of bed that early on a Sunday morning to run a few miles might have been difficult, getting to the stadium proved equally challenging as a heavy fog blanketed the entire region, reducing visibility to near zero in some areas. Despite the thick morning mist, attendance was even greater than expected.

As is sometimes the case, an event like this comes about in response to a personal tragedy. It becomes a way of healing while giving back to the community in which you live. “Karen Donahue had started it when her husband Dennis passed away from a massive heart attack,” said Michelle Herr of the Evergreen Athletic Boosters and this year’s event chairperson. “We used to have a stone track and she wanted to get a nice new track and field here for the kids and the community. Tragically, she passed away in a car accident with her grandson but her daughter (Taryn Schmitz) has continued to carry this on.”

With a modern track now in place this event continues to financially support the track program. Evergreen High School will be hosting the NWOAL track meet in the spring of 2017 and the monies raised from the Trot for a Track will be used to get the stadium ready to welcome the other seven league schools. “We have to get things cleaned up,” said Ms. Herr referring to the league meet. “We’re very excited.”

A large spread of post-race goodies were made available to the runners that included, fruit, bagels, cookies and several fluid-replenishing drinks. With the success of this year’s event, organizers are already looking forward to next year’s Trot for a Track.