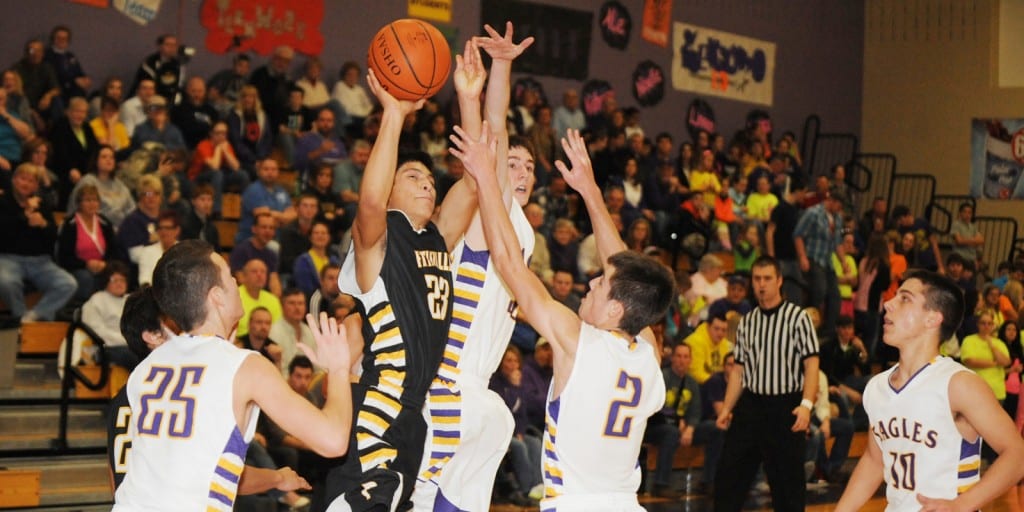 FAYETTE – Pettisville and Fayette…if there were ever two teams that could bring team speed to a new level, these two would be the ones.
On January 18, the Blackbirds flew out of The Birdcage for a renewal of their BBC rivalry with the Eagles. Although the home team held a four-point advantage at the half, the second half was a different story as the Eagles shifted into overdrive. In a blur of Pettisville black and white, along with Fayette purple and gold (with a smattering of Team K-Bob orange), both teams dropped the hammer in trying to outrun the other, the more successful of which being the Eagles who pulled out a 47-41 decision.
Zayne Colegrove hit for 18 points to lead the Eagles, with Chandler Sanford and Cole Burkholder each getting 9 points, Logan Franks 7 and Tyler Cox 4.
David Reyes fronted the Battling Birds with 18 points, while Kurt Siegel had 8 points. Tanner Rufenacht lifted 6 points, Dominic Frey and Austin Dykstra had 4 points apiece, and Jacob Valdez added a free throw.