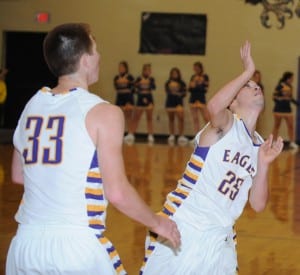 FAYETTE – They didn’t exactly set the nets afire in the process, but the Fayette Eagles found enough offense to match their defense that was shutting down the Fairview Apaches in a 35-17 win on December 14.

Koby Biddix drained a trey and Zayne Colegrove popped a pair of deuces in a seven-point first period for Fayette. While that may not impress many, it was more than enough to cover the two points posted by Fairview.

The Apaches never came closer over the course of the contest.

Colegrove finished with a game-high 13 for Fayette, with Chandler Sanford getting 7 points and Tyler Cox 6. Biddix finished with 5 points, and Cole Burkholder and Logan Franks had 2 points apiece.