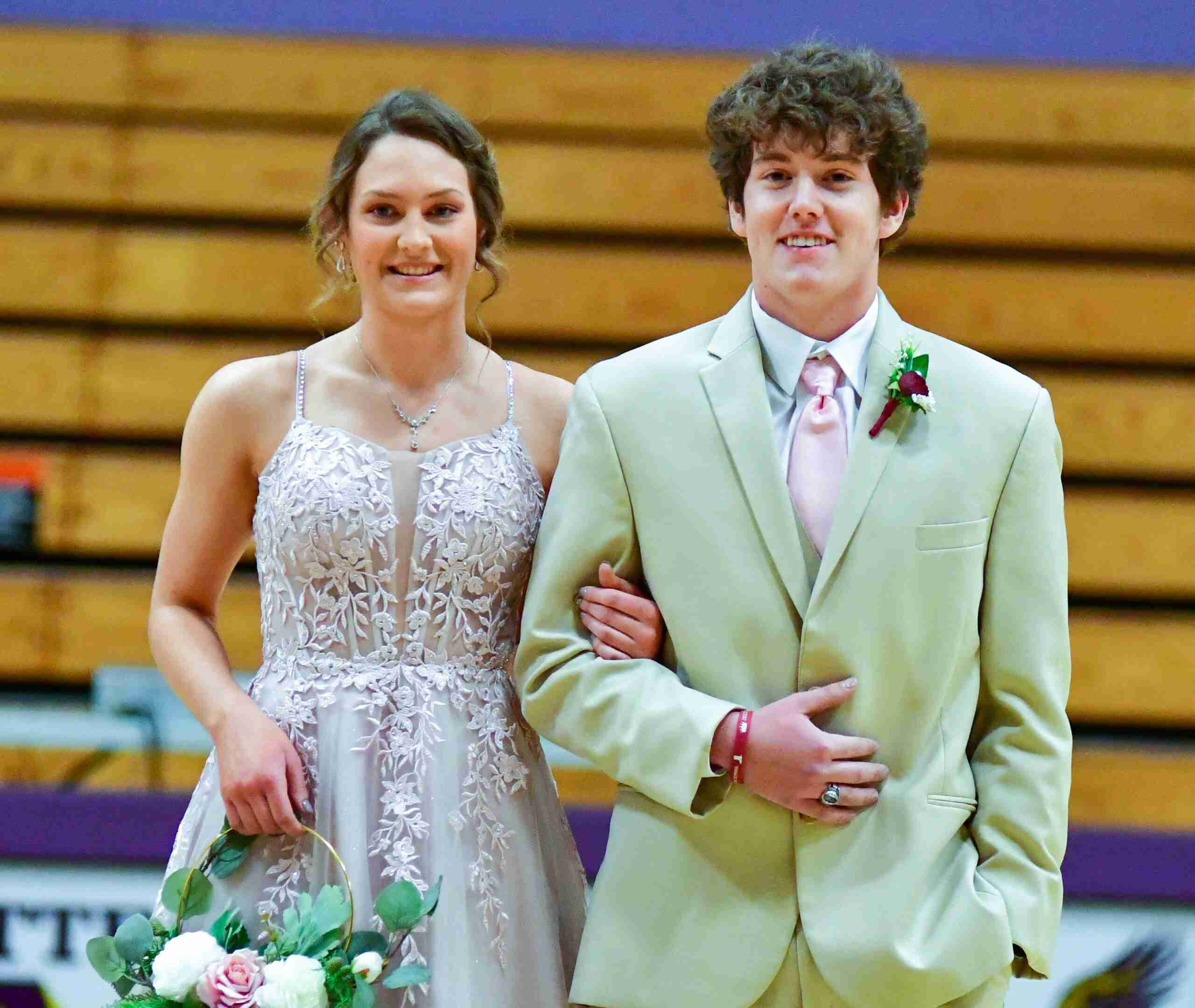 The Fayette Eagles held their Homecoming Basketball game and Dance on Saturday, January 15th. At 5:00 p.m. the Homecoming Court entered the gym which was packed full of parents and other students who were eagerly awaiting them.

Each pair entered the gym and took their places before the crowning of the King and Queen took place. With this year’s ceremony, the introductions started with Freshmen Attendant and Escort Zoie Brown and CJ Szabo.

Zoie is the daughter of Joe and Shannon Brown. Zoie participates in Volleyball, Basketball, Softball, FFA, Student Council, FUMY and Ignite.  Her favorite subject in school is Ag, and her favorite teacher is Mrs. Schaefer.  In her spare time, Zoie likes to go swimming.  Her favorite show is Grey’s Anatomy, and Patrick Dempsey is her favorite actor.

Zoie’s other favorites include the color pastel yellow, the season summer, and she loves Chick-fil-a’s spicy chicken sandwich. Zoie’s fondest memory at Fayette was last year’s relay for life day.

CJ was this year’s Freshmen Escort. He is the son of Scott and Tandy Szabo.  CJ is involved in basketball, band, 4-H, and FUMY. While in school, CJ enjoys going to Ag class with Mrs. Schultz.

While at school, CJ’s favorite memory was last year’s Relay for Life.  CJ’s future plans are to go to trade school to become a diesel mechanic.

This year’s 2022 Sophomore Attendant and Escort were Emersyn Sinks and Braxton Jacob.

Emersyn is the daughter of Matt and Samantha Sinks, and Amanda and Chad Miller. Emersyn is involved in basketball, softball, volleyball, FFA, and 4-H. In her spare time, Emersyn likes to spend time with her friends and Summer is her favorite time of the year because it’s when she gets to go to the lake and spend time with her family, which is also one of favorite things to do.

Her favorite movie is Finding Nemo, and her favorite color is purple. She enjoys rooting on the University of Michigan.  And her favorite foods are Chick-fil-a chicken nuggets and tacos.

Since moving to Fayette, Emersyn’s favorite memory has been making so many new friends and participating in sports.  Her favorite saying is “Sheeshh”, which she learned thanks to Jada.  Emersyn’s future plans are to become a pedatric nurse.

Braxton is the son of Eric Jacob and Tina Cox; and Crystal Shamplo. He is involved in baseball and basketball. Braxton’s favorite pastime is just chillin with the boys. His favorite movie is Pineapple Express, and his favorite actor is Ryan Reynolds.

The 2022 Junior Attendant and Escort were Gabby Green and Amari Tenzy. Gabby is the daughter of Steven Whetro and Danielle Green. Gabby is involved in Cheer.

Her favorite hobbies and pastimes involve sleeping, binge watching Netflix, and listening to music.  Her favorite shows to binge watch are Grey’s Anatomy or Lucifer.

Her favorite actress is Lauren German.  Her favorite color is purple, and her favorite team is Ohio State. Although summer is her favorite season because she can be free, she does enjoy school.

Her favorite subject is government, and her favorite teacher is Mr. Sorrel.  Gabby enjoys Chinese food, especially orange chicken. Since Gabby’s favorite saying is “do better, be better, know better” it seems only fitting that her future plans would be in a profession that would help people in need.

Gabby’s escort was Amari Tenzy.  Amari is the son of Helena Garrett. Amari’s favorite pastime is hanging with his besties. His favorite TV show is called On the Block, and his favorite actor is Kevin Hart.

Amari’s favorite color is red, and his favorite team is Alabama Crimson Tide.  Although summer is his favorite time of the year, because there is more time and more things to do, he has always enjoyed going to Mr. Sorrel’s and Mr. Hylander’s classes. Amari’s favorite saying is “Bing Bong”.  Amari’s future plans are to move to Texas.

This year’s Senior Attendant and Escort are Alicyn Brown and Elijah Lerma. Alicyn is the daughter of Joe and Shannon Brown. Alicyn participates in volleyball, basketball, track, cross country, and softball.

While she is not at school, Alicyn likes to hang out with her friends. Some of Alicyn’s other favorite things include the TV show Grey’s Anatomy, the color lavender, the food – pizza, and the restaurant – Chipotle.

She also loves summertime because its warm outside.  Alicyn’s favorite memory is the time Andy fell on his butt at basketball practice. Alicyn’s future plans are to become a massage therapist.

Elijah Lerma is this year’s senior escort.Elijah is the son of Israel and Megan Lerma. He is involved in basketball, track, and FUMY.

Outside of sports, he enjoys just spending time with the boys and gaming. Elijah’s favorite foods are pizza and steak.  His favorite colors are purple and blue, and his favorite teams are the University of Michigan Wolverines and the Dallas Cowboys.

In her spare time, Emma likes to hang out with her friends. Her favorite color is purple, and her favorite movies is the Twilight series. Emma also enjoys eating any type of pasta.

Her favorite sports teams are the Ohio State Buckeyes and the Cleveland Indians, I mean Guardians.  Emma claims both summer and fall are her favorite seasons.  She enjoys the summer because it means she gets to go on family vacations.

And she enjoys the fall because she loves to go running with the girls at cross country practice. Which brings up one of her fondest memories, which was when she made it to regional her junior year in cross country by 2 points.  Emma’s favorite saying is “woof”. Emma’s future plans are to become a radiologist.

In his spare time, Owen enjoys hunting, fishing and spending time with his friends.  Since Owen’s favorite sport is golf, it only makes sense that his favorite movie is Caddyshack.

Owen’s favorite color is orange, and his favorite class is Ag. Owen also loves a good, rare steak as his favorite meal. Owen claims that winter is his favorite season because of the snow and cold weather and all the fun activities it brings with it like sledding and ice fishing.

Owen’s favorite memory at FHS was last year’s relay for life. Owen’s future plans are to go into the Air Force after graduation.

Last but not least was this year’s Princess Ava Hibbard and Prince Will McKinney.

Ava is the daughter of Evan and Amy Hibbard. Ava’s activities include soccer, t-ball, and being the water girl for the JV and Varsity girls’ Basketball team. Which also happens to be her favorite team and sport.

During her free time, Ava loves to paint and draw, and watch the Big Show, Show.  Her favorite actors are Elsia and Annia from YouTube. Her favorite color is teal, and her favorite food is Ice Cream.

Ava’s favorite time of the year is summertime. But she also enjoys school because that is when she gets to see her favorite teacher Mrs. Hannah aka Mrs. Sanford. When Ava grows up, she wants to be a nurse that works with babies.

William aka Will is the son of Jenny McKinney. Will is involved in Cub Scouts, T-ball, and Soccer. Will’s favorite things to do are going to Texas and going to the waterpark.

Summer is his favorite season. When Will grows up he wants to be a soldier in the Army.

Thanks was given to last year’s Homecoming Queen Miah Beauregard and King Eli Eberly who came back for the ceremony. Eli is currently working at ABC Trufast in Bryan. Miah is currently attending the University of Toledo, majoring in chemical engineering.

After the introductions were finished, the Homecoming Court moved to the stage inside the gym to pose for pictures. The ceremony was proceeded by the Fayette basketball games with the varsity game taking place right before the Homecoming Dance.

The varsity team won during the very last second of the game with a half-court and one-handed shot at the ending buzzer. The shot electrified the gym which then passed its energy on to the Homecoming Dance to make for a great night. 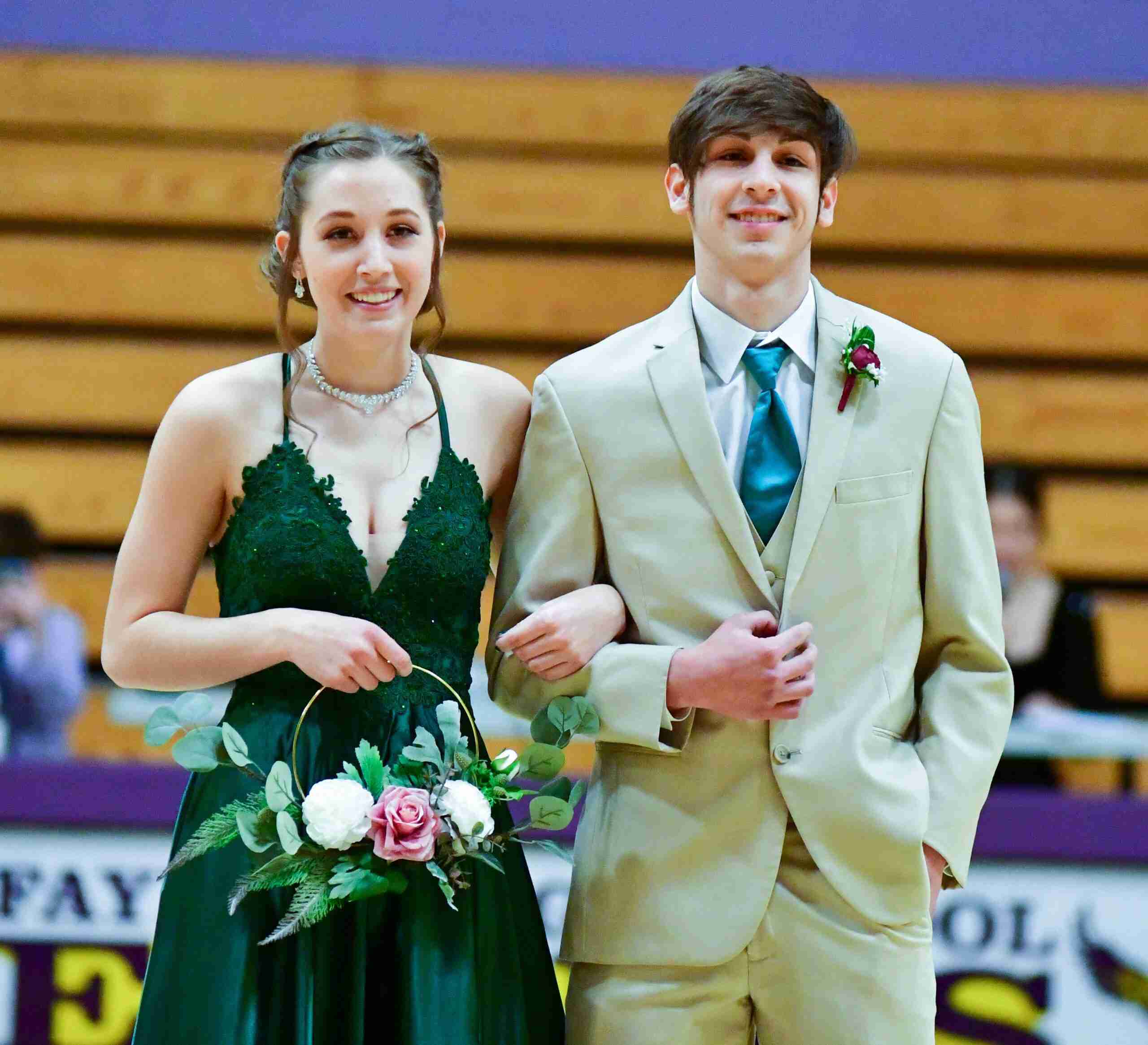 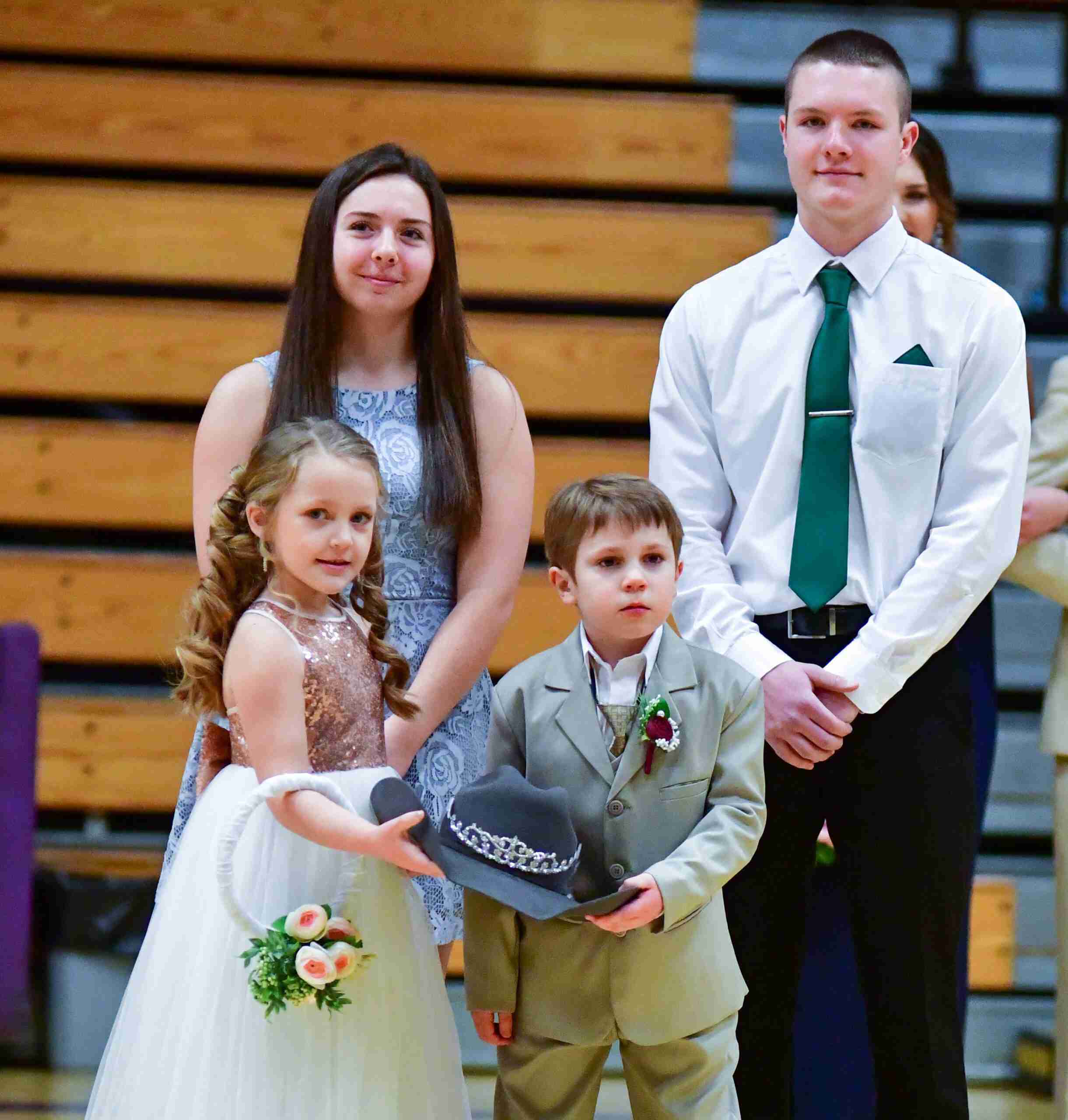 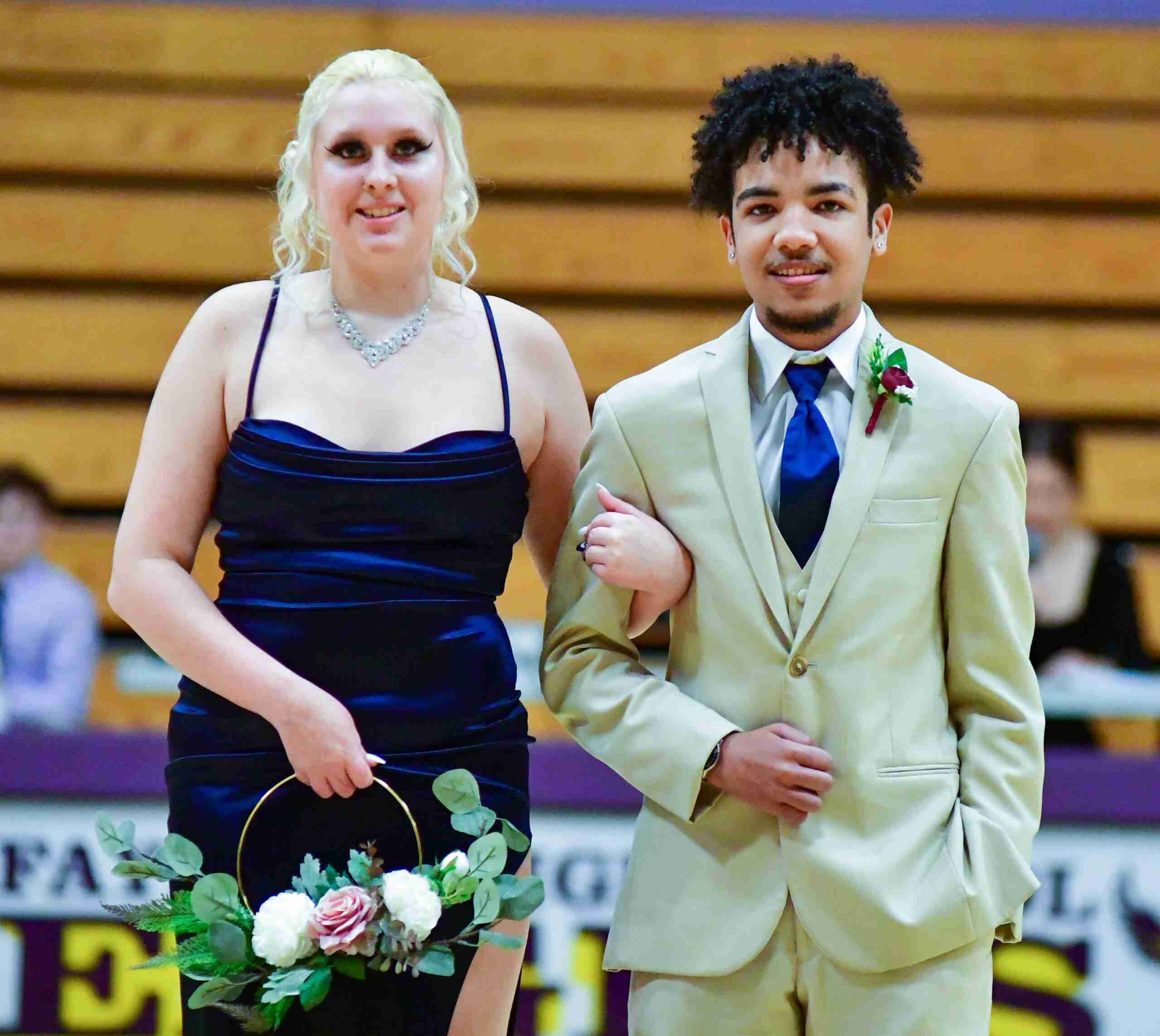 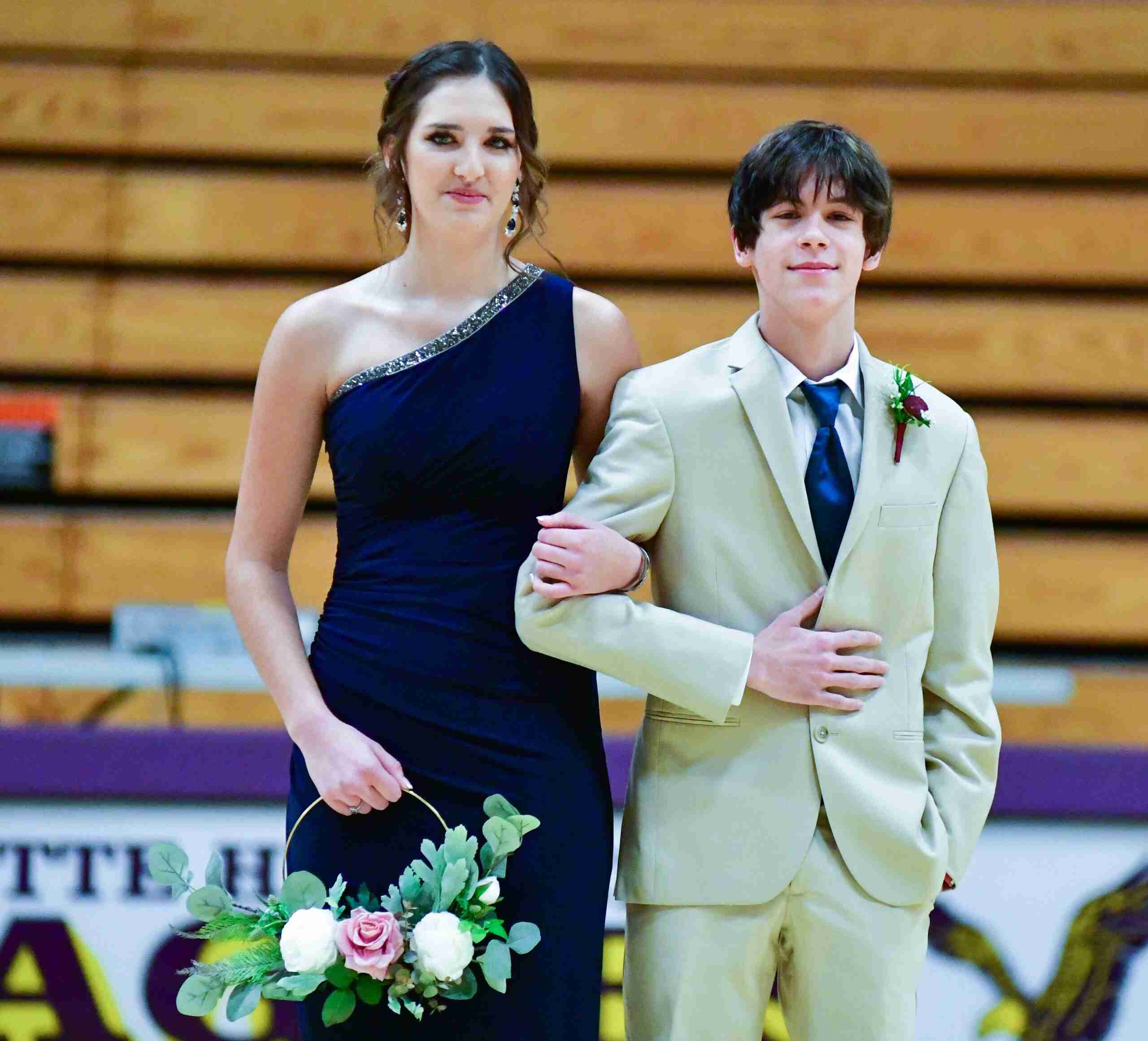 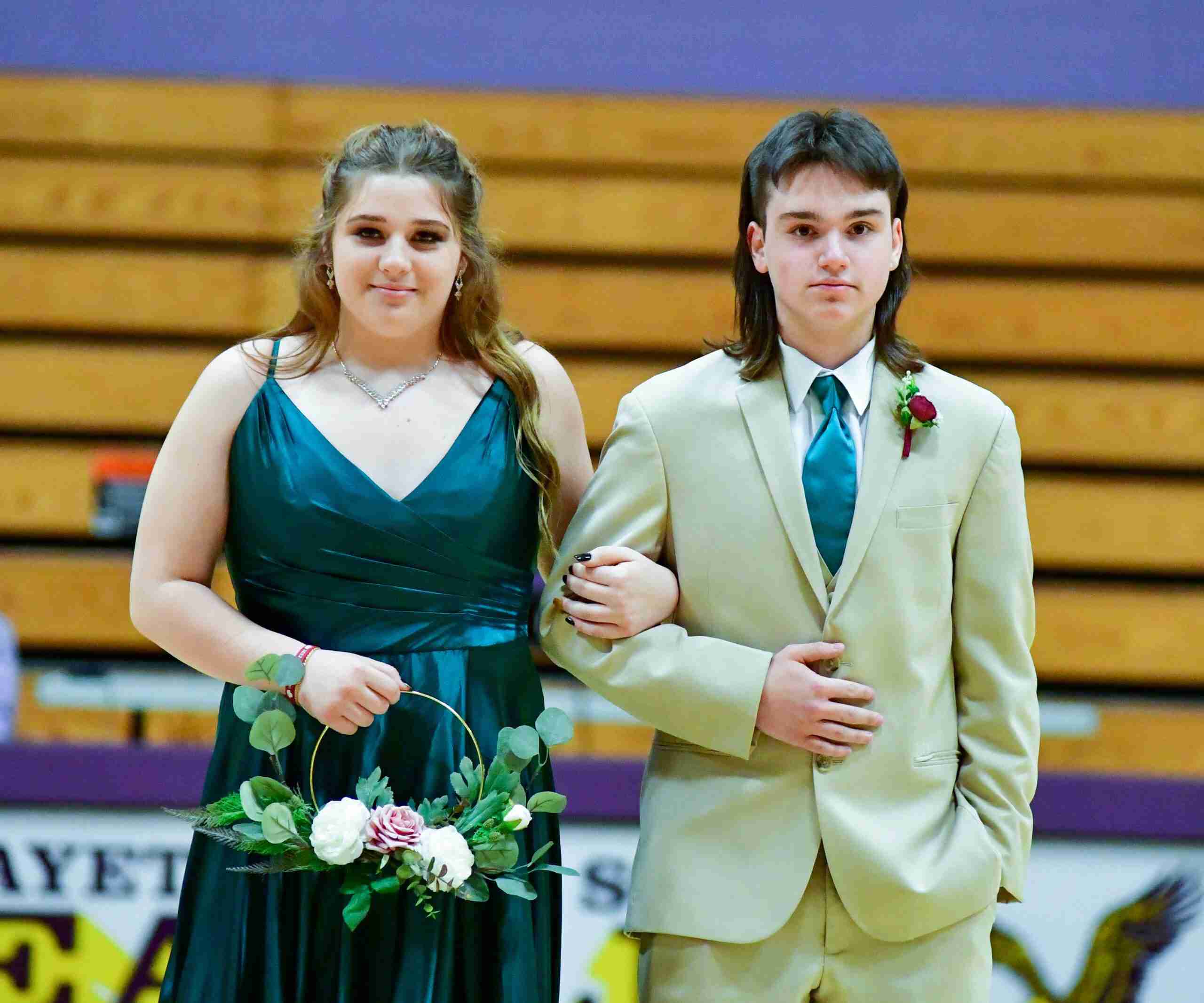