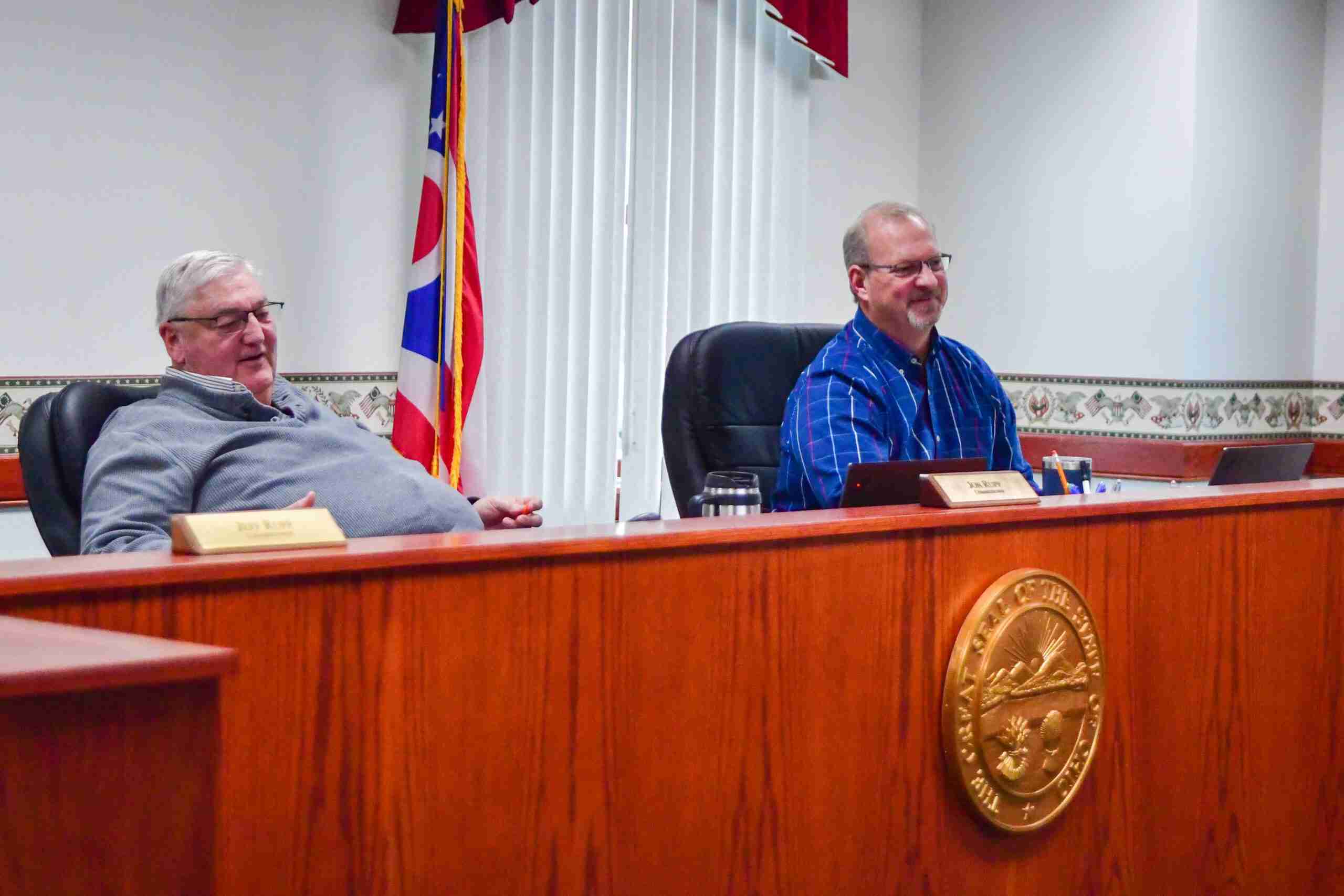 DISCUSSION … Fulton County Commissioners Jon Rupp (left) and Joe Short discuss the money available, and possible projects for the Brownfield money and demolition money that will be received from the State of Ohio. (PHOTO BY JACOB KESSLER, STAFF)

The Fulton County Commissioners held one meeting this week after the Tuesday meeting being cancelled. The meeting was held on Thursday, January 20th at 9 a.m.

The meeting was called to order followed by the Pledge of Allegiance and a prayer. Commissioners first moved to hear a presentation over Zoom given by Matt Wagner from Tetra Tech.

The presentation was in regard to the Britsch property in Wauseon and the contamination issues it is facing. A cleanup project had begun but stalled around 2017.

Many blight issues above ground were completed but issues below ground still exist. The recommended clean-up cost from 2017 is for $388,000 but, due to the quotes old age, some tweaking of the numbers may need to be done.

Moving forward, the next steps are to see the updated information and to apply for a grant that will help with the cost. Tetra Tech asked the Commissioners to pass a Resolution to make the company their official consultants for the issue.

Commissioners then moved to approve the minutes from the January 13th meeting as well as the agenda and approval of the bills.

A review of the weekly dog warden report was then completed before then moving to approve the following agenda items. An increase and transfer of appropriations for various departments.

An increase and transfer of appropriations for postage reimbursement. A grant petition for the detachment of territory from the Village of Swanton.

Approved a request from the Village of Delta for permissive motor vehicle tax funds. Authorized an Ad for PY2022 CDBG first public hearing. Approved a personnel request on behalf of Fulton County JFS-internship.

Approval was also given for purchase orders and travel requests. Scott Gruber from CMT and Treasurer Char Lee then gave an investment update with Mr. Gruber calling in over the phone.

According to Mr. Gruber, there are many changes since last time everyone spoke. The Fed is starting to raise interest rates and the time frame for which those hikes will take place has changed as well.

The hikes are due to inflation which has been happening faster than the Fed originally stated they expected it to. Discussion followed regarding future planning and investments as well as dealing with the uncertain future.

Good news is that unemployment has continued to fall but that news is stifled with the fact that there are still more than normal job openings that need to be filled. Commissioners then went into recess at 9:33 a.m.

Upon returning from recess at 9:44 a.m. Commissioners heard a presentation from Michael Coonfare from Civil & Environmental Consultants regarding the Brownfield Grant.

Mr. Coonfare explained that there are two pots of money that is included in this round of county set aside dollars.

One is for $1 Million as part of the brownfield grant and the other is for $500,000 for building demolition. Commissioners are currently looking at several areas they are interested in using the money for.

One area in particular is in Delta to which, Delta’s Village Administrator, who was also present, stated the Village may be interested in after work is completed.

He also informed the Commissioners that a partnership, that includes financial cooperation, could be looked at.

The Commissioners stated that multiple projects are being looked at, but that nothing has been decided as of yet. The meeting was then adjourned at 10:13 a.m.