WILLIAMS COUNTY FAIR BOARD: Board Approves Of Anna Letsche Conducting A Scent Work Event At Fairgrounds 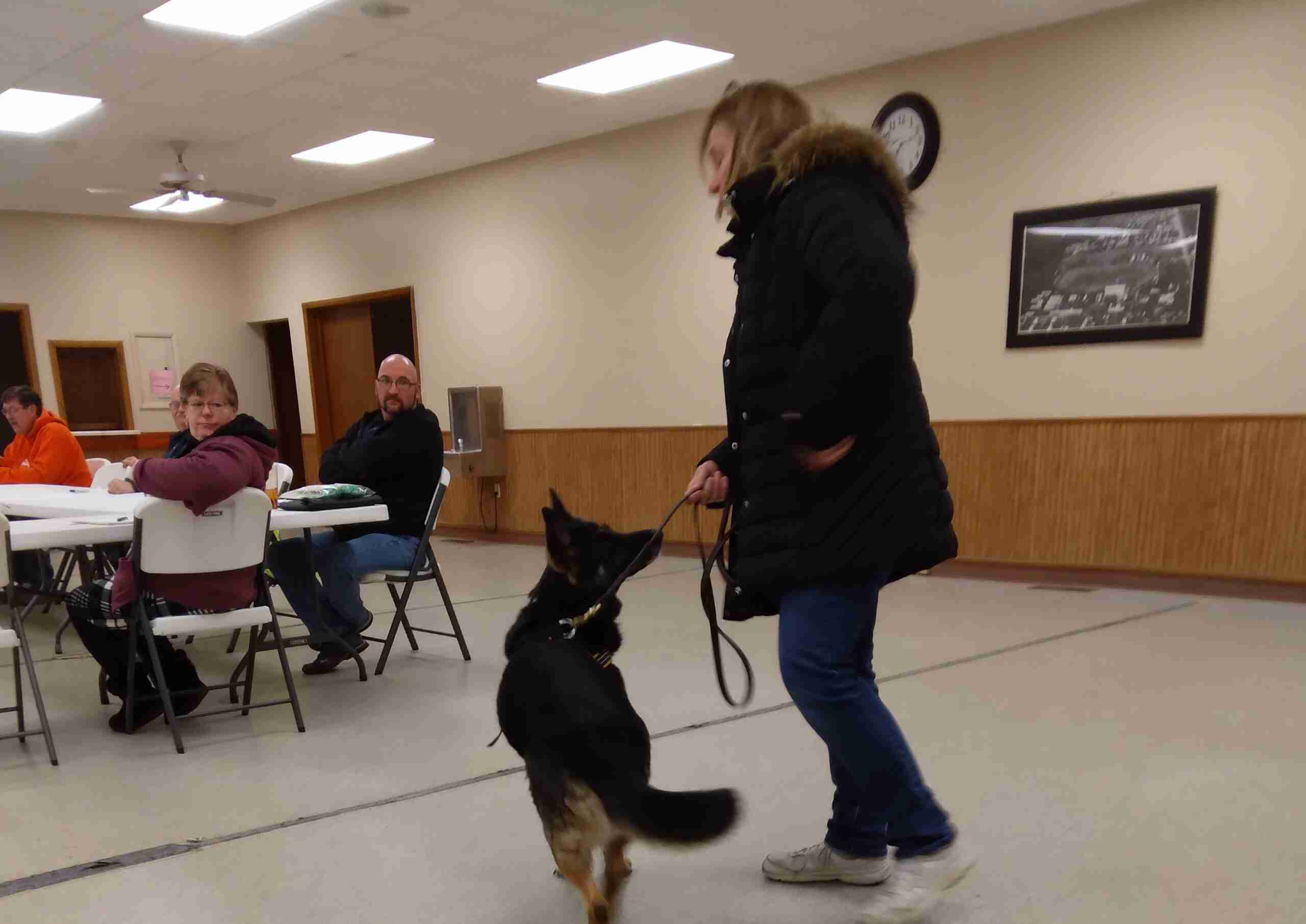 APPROVING EVENT … Anna Letsch of the Northwest Ohio Scent Work Enthusiasts and her dog Grace gave short presentation to the Williams County Fair Board. The Board approved of Letsch’s request to hold an event on the fairgrounds on July 15-17. (PHOTO BY DANIEL COOLEY, STAFF)

The Williams County Fair Board meeting of January 20, 2022 began with the Call to Order, followed by the Pledge of Allegiance. Eleven of the 13 committee board members were present.

The meeting began with a presentation by Anna Letsche, of Northwest Ohio Scent Work Enthusiasts. Letsche placed several scents in the meeting room for her dog Grace to find and Grace found every one.

Letsche wanted to use one of the fair rooms to set up on Friday, July 15 and then hold the event on July 16 and July 17. There will be 50-70 dogs there, with 98% of the dogs on leash. Letsche said that these dogs mirror what drug dogs will do.

The board approved of the event, to be added to new business. Letsche will then be able to sign a rental contract.

The board then approved of the previous meeting, from December 2021, provided there will be a couple of corrections made in the minutes. Next, the board approved of the treasurer’s report.

Committee member Matt Kennedy then gave a report. Kennedy said that they were looking to place the queen in the Gillette Building and that tickets for the fair can be bought on the fairgrounds on January 29, from 8 a.m.-12 p.m. On line sales will then begin, after that.

Kennedy said he will need updates from the committee members in March, so that they can go online with the fair events by June. He has also created a data base for camping and by February, will have letters ready to set up.

Kennedy stated that a Rodeo contract has been signed for $13,000 with Broken Horn. This rodeo will have some kids events and Kennedy is looking for sponsors of prizes for the kids.

Kennedy added that this will be Broken Horn’s last Rodeo of the season, so there should be a lot of competitors. Cost for Rodeo for the public will be $10.

In addition, Kennedy is working on getting contracts for the Junior Fair Show and that silent auction bid sheets will be ready within the next week or so. The beverage trailer and gun raffles have been taken care of.

Dave Page then gave a report and stated that they will be going with Pettisville Meats to provide food for the fair’s fundraising banquet on February 12. The food will be smoked ribs and chicken, along with rolls and pies. They are still selling tickets for the event.

Also, Scott Carrol reported that he is working on expanding the fish tournament. In old business, Stacey Perry stated that it will take between $23,000-$24,000 to remodel the 4-H building. The Fair Foundation said that they can give $8,000. Perry is looking into other groups to see what they will pledge.

In other old business, there will be a Maple Syrup Festival on March 26 and the fair schedule is organized.

New president Pam Goll reminded everyone that the fairbook updates for committees for the events that they are in charge of, are due by the march board meeting.

The board then approved to adjourn the meeting.