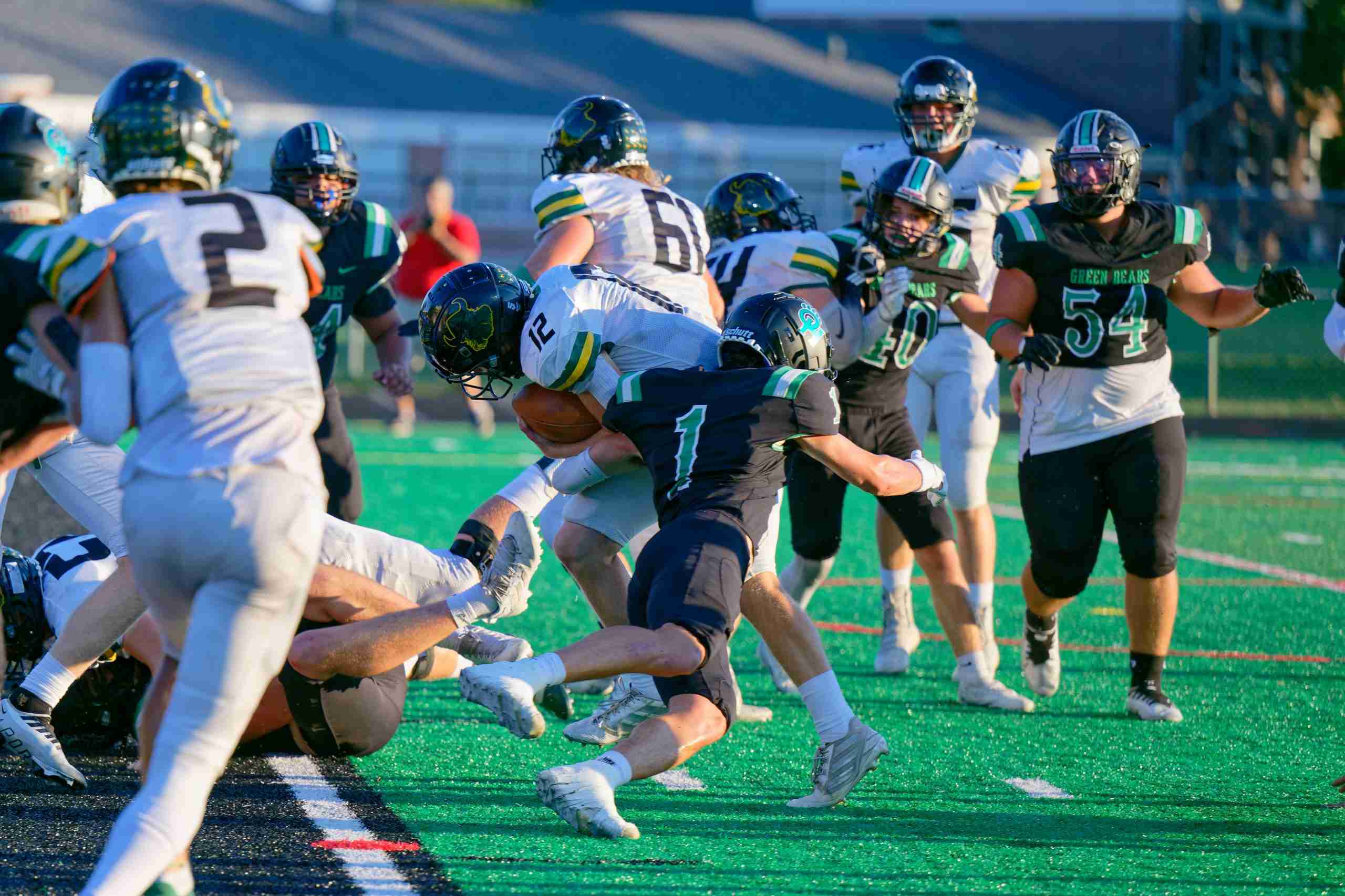 OTTAWA HILLS- The Green Bears (3-0) turned in big plays in the fourth quarter to outlast Evergreen in a battle of unbeatens at Ottawa Hills High School on Thursday night.

With the game tied at 21, the Green Bear defense made the first big play of the quarter as Sam McCaffery intercepted a pass by Evergreen quarterback Hunter Vaculik and returned it 33 yards for a touchdown.

Evergreen appeared to have a quick response by returning the ensuing kickoff 95 yards for a touchdown, but it was called back by a holding penalty.

The subsequent Evergreen drive ended with a punt after moving the ball to Ottawa Hills 39-yard line as they were able to pin the Green Bears at their own nine-yard line.

After a 28-yard scamper by Rocco Pillarelli, Ottawa Hills extended their lead as Chase Miller found McCaffery streaking down the middle of the field on a 68-yard touchdown pass to make it 35-21.

The Ottawa Hills defense would close out the game by ending the next two Evergreen with interceptions as they finished the night with four forced turnovers.

Early on it looked like it was going to be a runaway for the Green Bears with Pillarelli scoring on runs of 39 and one yard to give Ottawa Hills a 13-0 lead with 3:03 remaining in the first quarter.

Evergreen would respond with a two-yard TD run by Vaculik to end the quarter and cap off a drive that included a 41-yard pass to Riley Dunbar (7 catches, 119 yards) on third down to put the ball on the two-yard line.

Ottawa Hills rolled the dice early in the second by going for it on fourth and three at their own 33-yard line and the Vikings were ready as they stuffed Pillarelli to take over on downs.

It took Evergreen just one play to capitalize as Vaculik hooked up with Dunbar for a 30-yard pass play to give Evergreen their first lead at 14-13.

The second half started with Vikings on the move before Ottawa Hills forced a fumble at their own 38-yard line at the 10:31 mark.

The Green Bears moved quickly needing just five plays to cover 62 yards, ending with a 27-yard touchdown pass to McCaffery and after a two-point conversion run by Miller it was 21-14.

It was Evergreen’s turn then with a seven-play, 70-yard drive that culminated with a fourth down scoring strike of 21 yards by Vaculik to Dunbar to tie the game at 21-21 heading to the final stanza.

Vaculik was 12-24 passing for 176 yards, two touchdowns, and three interceptions while also running for 113 yards and a score.