FULTON COUNTY GAME OF THE WEEK: Wauseon Falls In Overtime To Liberty Center 34-28 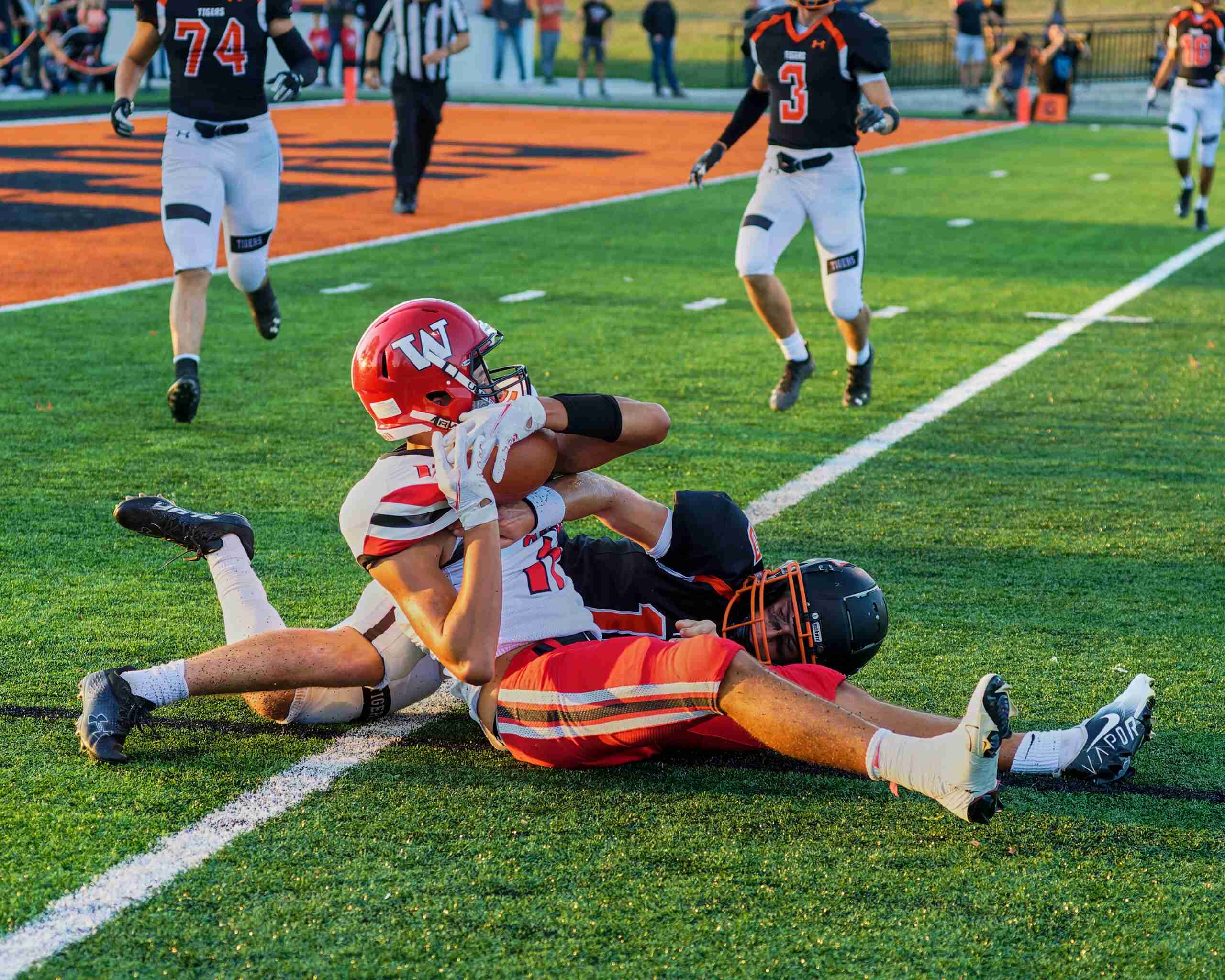 FOURTH DOWN CONVERSION … Sam Smith, Jr. hauls in a fourth down pass at the Tigers five-yard line in the first quarter that help set up an Indians touchdown. (PHOTO BY JACOB KESSLER, STAFF)

LIBERTY CENTER – It was a contrast in styles in Henry County Friday night as the ground and pound Liberty Center Tigers hosted the aerial attack of Wauseon.

It was the Tigers though going through the air for the game tying touchdown in the fourth quarter and then returned to the ground in overtime as they knocked off Wauseon 34-28 on Kip Kern Field at Rex Lingruen Stadium.

The opening drive featured a couple big plays in the passing game for Liberty Center with quarterback Zane Zeiter going 21 yards to tight end Evan Conrad and later in the drive he dumped the ball off to running back Teejay Moore who went 23 yards.

The Indians responded with an impressive drive that included a fourth down conversion pass from Elijah McLeod to Sam Smith down to the Tigers five-yard line to keep the drive alive.

McLeod would eventually cap off the drive that covered 67 yards in 12 plays with a one-yard quarterback sneak to tie the game 7-7.

The next Liberty Center possession started with a 22-yard run by Zeiter before he later found Landon Amstutz for 16 yards on a fourth down and 13 putting the ball on the Wauseon four-yard line after a 15-yard penalty against the Indians was tacked on to the end of the play.

Two plays later Orr found the end zone again, this time from two yards out, to put Liberty Center back in front 14-7 after the 12-play, 63-yard drive.

Wauseon showed their explosiveness with 4:26 left in the half on a possession that started at their own six-yard line after a penalty on a punt return.

McLeod unloaded a deep ball down the middle of the field to Jude Armstrong who got behind the Tigers secondary and he took it 94 yards to the house to make it 14-13 after the extra point was blocked.

Once again, the Tigers answered, this time a six-play, 60-yard drive (all runs) with Moore scampering 19 yards for the TD to extend the Tigers lead to 21-13.

The Tigers would get one more opportunity to put points on the board before halftime as Riley Chapa intercepted a McLeod pass to give LC the ball at the Wauseon 39-yard line.

Liberty Center, with no timeouts, drove the ball to the Wauseon one-yard line but Zeiter was stuffed on a sneak attempt on fourth down and one as time expired in the half.

The second half started with the Indians driving deep into LC territory as McLeod connected with Armstrong three times and they were aided by a horse collar penalty against the Tigers.

The drive ended though as McLeod threw his second interception of the night, this one coming at the LC one-yard line as the Indians were turned away.

Liberty Center was able to get a first down to improve their field position before having to punt, which was partially blocked to give the Indians the ball at the LC 25-yard line.

It took the Indians just four plays to score as McLeod eventually found Jonas Tester on a screen pass and he took it in from four yards out to tie the score at 21 after McLeod hit Tester for the two-point conversion.

Wauseon turned in another big play from the passing game to start the fourth quarter with McLeod going 67 yards to Smith streaking down the right sideline to give Wauseon a 28-21 lead.

The ensuing drive was all LC on the ground after a pass by Zeiter was nearly picked off to start the drive.

Moore carried for 11 yards, Zeiter went 11 yards up the middle on a draw play, and Moore rumbled 20 yards as the Tigers were on the move.

After four more run plays that totaled 31 yards, LC went to the play action pass as Zeiter found the tight end Camren Foster wide open in the end zone for an eight-yard TD pass to tie the game at 28-28 with 6:38 left in regulation.

Both teams had opportunities in the final minutes of the fourth quarter but neither team could cash with the Tigers turning the ball over on a fumble and Wauseon missing on a deep pass.

Liberty Center scored on the first play of overtime as Moore went around the left end on a sweep and raced 20-yards for the score to give LC a 34-28 lead after the extra point was missed.

The Indians overtime possession started with three incomplete passes setting up a fourth down and ten at the Tigers 20-yard line and the fourth down pass by McLeod fell incomplete in the end zone to give LC the win.

The Tiger’s running game was the story of the night as they rolled up 355 yards on the ground topped by Moore with 139 yards on 15 carries, Zeiter had 16 totes for 98 yards, and Orr carried 20 times for 91 yards.

McLeod finished the game 15/31 passing for 268 yards with three touchdowns and two interceptions.

The Indians had two receivers go over 100 yards in the game led by Armstrong with nine catches for 143 yards and Smith had 104 yards receiving on three receptions.