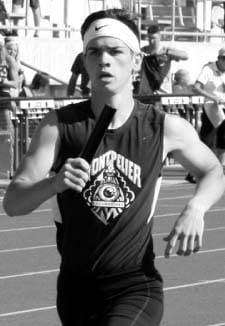 DIVISION III Northwest Ohio was well represented recently at the 2017 Ohio High School State and Field Championships held at OSU’s Jesse Owens Track. Our area’s Division III teams grabbed attention in the very first race as Pettisville’s Lady Blackbird 4×800 relay team ran to a second place finish in the 4×800 relay race.  The team of Elizabeth Sauder, Nichole Foor, Morgan Leppelmeier and Alexa Leppelmeier completed the race with an impressive time of 9:12.89.  In the boy’s race, Montpelier’s 4×800 relay ran to a 10th place finish with the team of Austin Miller, Tre Hutchinson, Jared Rediger and Michael Blake. The quartet finished in 8:13.77. Edon’s junior, Logan Bloir, followed in the finals off the100 meters. The Bombers’ speedster sprinted his way to a third place finish with a time of 11.02.

The Archbold girls got into the act as they ran to a second place finish in the 4×200 relay. Macey Rupp, Emily Roth, Gwynne Riley and Dakota Stamm took the runner up spot with a time of 1:42.84.  The Lady Blue Streaks came back in the 4×100 relay finishing fourth with at time of 50.66. The foursome included Shylo Richardson, Emily Roth, Julia Lambert and Macey Rupp. Pettisville’s Alexa Leppelmeier was on the track again, this time running individually in the 1600 meters. Leppelier finished second in 5:04.24. Leppelmeier’s teammate Elizabeth Sauder ran to an 11th place finish in 2:17.92.  Delta’s Maverick Wright competed in the boys’ race finishing 11th in 4:31.88. Archbold’s Dakota Stamm and Jack Fisher were area representatives in the 400 meters races. Stamm ran to a second place finish in 56.74 and Fisher ran to an eighth place finish in 50.64. Montpelier’s Michael Blake was fifth in the boys Division III 800 meters with a time of 1:57.59. Both the Blue Streaks 4×400 relay teams ended the meet in impressive fashion as the Lady Streaks’ Julia Lambert, Emily Roth, Gwynne Riley and Dakota Stamm ran to a fourth place finish in 4:02.74 and the Bluestreaks’ Deven Girdham, Noah Blankenship, Sam Petersen and Jack Fisher finished in third position in 3:24.23.

Montpelier’s 4×400 boys relay of Brandon Stein, Austin Miller, Kolden Uribes an Michael Blake were eighth in 3:26.84. In the field event it was Michael Blake again, this time in the High Jump. Blake finished in 10th spot with a leap of 6’2”. Blake was seven spots behind Delta’s Peyton Phillips who finished as bronze medalist with a leap of 6’6”.  Julia Smith of Swanton placed third in the girls High Jump with a leap of 5’7”. In team scoring the Archbold girls finished fourth in the State with 26 points and the Pettisville Lady Blackbirds were 10th with 16 points. In the boys’ meet, Archbold was in 36th spot with seven points, Delta and Edon were tied for 39th with six points and Montpelier was 46th with five points.

DIVISION II A few local teams took part in the 2017 State Track and Field Division II meet held recently on the campus of Ohio State University at the Jesse Owens Track. Wauseon was represented in the boys’ 4×800 relay.  The Indians’ foursome of Aaron Beck, Owen Newlove, Michael Cheezan and Kyle Vernot ran in 15th position with a time of  8:18.88. The only other area representative was Parker Harris of Bryan who finished 15th in the Pole Vault with a leap of 12’.