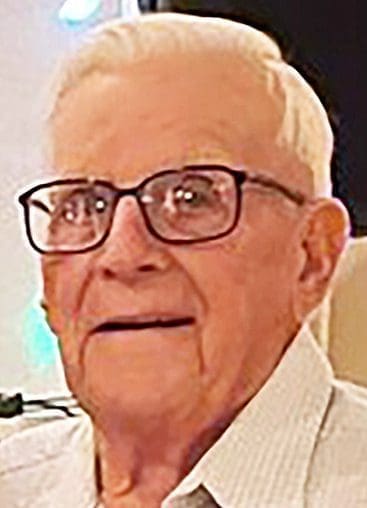 Frank retired from Aro Corporation with over 40 years of service in plating and custom builds.

He attended Calvary United Methodist Church in Williams Center. When he was younger he served as a Scout Leader and Little League baseball coach.

Frank enjoyed fishing, camping, and working in his yard and garden.

G. Frank Hosler was born on December 13, 1934, in Sherwood, Ohio, the son of Gale W. and Caroline (Roehrs) Hosler. Frank married Barbara J. Blaisdell on August 20, 1955 in Bryan and she survives.

Frank is also survived by his daughters, Sandra J. Hosler and Michelle R. Hosler, both of Bryan; 6 grandchildren; 14 great-grandchildren and two great-great grandchildren.

He was preceded in death by his parents; son, Scott A. Hosler; sister, Eileen Cartyne and brother, Don Hosler.

Visitation will be held on Thursday, December 8, 2022 from 5:00-7:00 P.M. at the Krill Funeral Home, 860 West Mulberry Street, Bryan. Funeral services will be held on Friday, December 9, 2022 at 11:00 A.M. in the funeral home with Pastor Tom Graves officiating. Burial will follow at Shiffler Cemetery with graveside military rites provided by the combined American Legion/VFW Honor Detail.

Those wishing to give a memorial donation may give to a charity of the donor’s choice.

To send a flower arrangement or to plant trees in memory of G. Frank Hosler, please click here to visit our Sympathy Store.