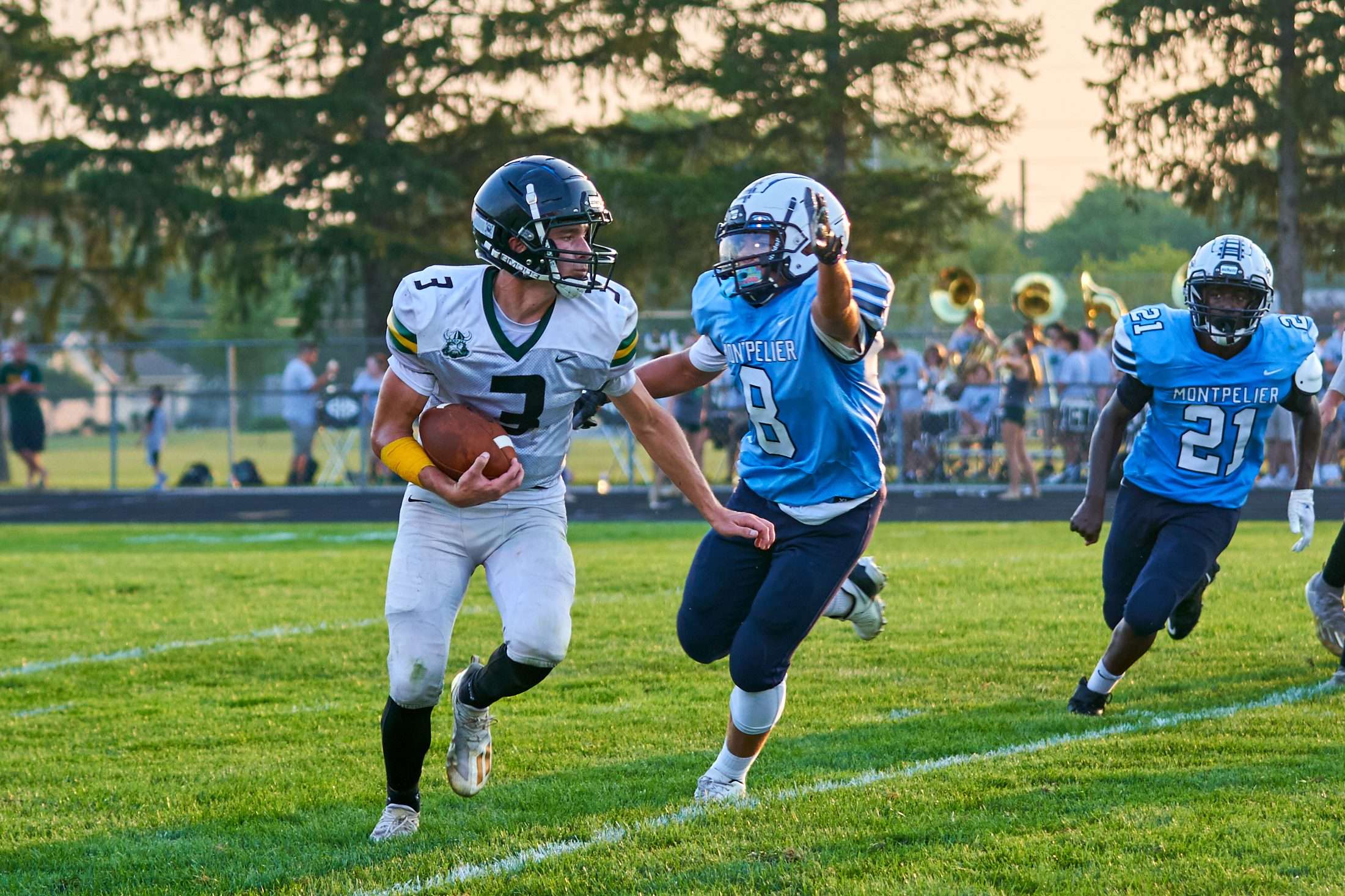 2-0 START … Evergreen quarterback Payton Boucher has helped engineer the Vikings to wins over North Baltimore and Montpelier as they prepare to face Ottawa Hills.

Here are some observations from a few games during week two of the high school football season.

TINORA TOO MUCH FOR WAUSEON

The Indians youth at quarterback and on the line of scrimmage were evident in Tinora’s 23-13 win last week. The much more experienced Rams ran the ball at will against the middle of the Wauseon defensive line while their defense harassed Indians sophomore quarterback Elijah McCleod.

Wauseon tries to get back on track this week at Napoleon.

Two of the best quarterbacks in Northwest Ohio squared off in Edon last Friday and they didn’t disappoint. Edon’s Drew Gallehue and Antwerp’s Carson Altimus went back and forth before the Bombers pulled out a 41-26 win.

Edon looks to improve to 3-0 with a trip to Hicksville this week before starting TAAC play at Northwood next week.

Even though Archbold was picked narrowly to finish second in the NWOAL, it has felt at times Archbold has been forgotten about, with a lot of the talk in the league centering around Wauseon and Liberty Center.

Archbold will take their perfect record on the road this week to face the Lake Flyers who defeated Northwood 35-0 after dropping their season opener 28-0 to McComb.

Through their first two games, the Bluestreaks offense hasn’t missed a beat from the 2020 season. Archbold has outscored their opponents 71-14 while averaging 485 yards per game while the defense is surrendering only 193 yards per contest.

Of course, when you talk about Archbold, you start with senior quarterback DJ Newman. So far, Newman has rushed for 371 yards and six touchdowns and is 27/48 passing for 330 yards and three scores.

Newman has spread the ball around with eight different receivers catching passes in their first two games.

One of the early season surprises has been the 2-0 start by Evergreen, who have won four games in a row dating back to last year.

The key for Evergreen has been the play of quarterback Payton Boucher who has gone 28/38 throwing the ball for 376 yards for three touchdowns.

Ottawa Hills, who are expected to contend for the TAAC championship, lost in week one to Gibsonburg (14-0) and had to rally to escape with a 24-13 win at Swanton last week.

Nate can reached at publisher@thevillagereporter.com