Hilltop Cadets Claim BBC Title With The Defeat Of Pettisville 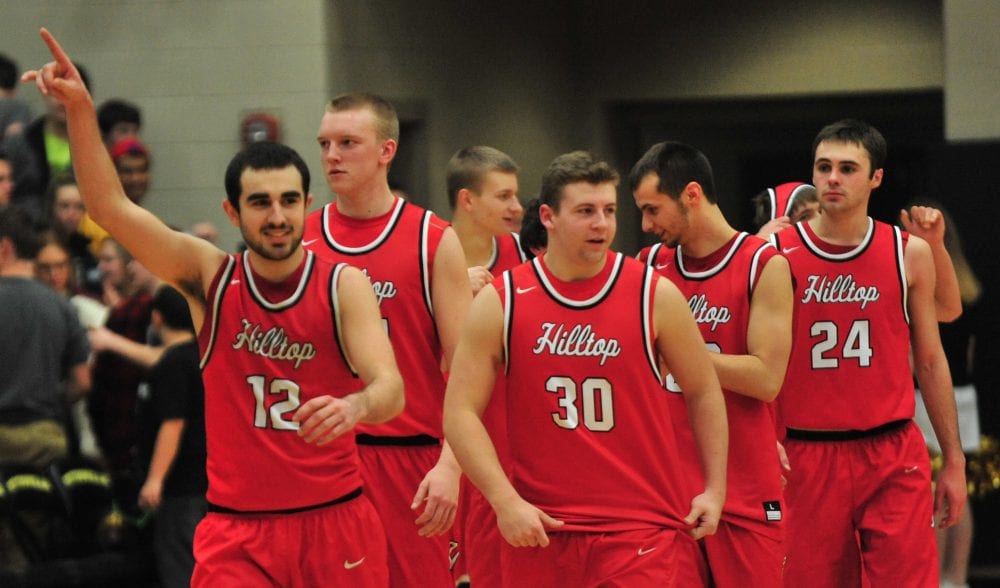 PETTISVILLE – For the first time since 1993, the Hilltop Cadets Boys Basketball Team can call themselves “Buckeye Border Conference Champions!” For the Cadets, especially the seniors, this was all part of the plan for this season. However, the host Pettisville Blackbirds didn’t make it easy for Hilltop to capture the title. In a contest that included eight lead changes, and six ties, the Cadets were able to escape the “Nest” with a hard fought 46-42 decision over the Blackbirds in the February 10th contest.

Playing before a near capacity crowd, and full of adrenaline from celebrating “Senior night”, the hosts came out fired up from the start. Junior guard Steven Riley drew first blood for the Cadets with a bucket. However from there Pettisville reeled off 7 straight points, the last basket a 3 pointer by Justin Rupp, to take a 5 point lead. Hilltop responded with a 5-0 run of their own to tie the game 7-7. The Blackbirds scored 5 straight to end the 1st quarter on top, 12-7.

A jump shot by Canidate Vickery extended the Pettisville lead to 14-7 to open the 2nd period. The Cadets slowly cut into the deficit the rest of the quarter and at halftime the Blackbirds held a slim 21-19 advantage.

To start the third stanza, a lay-up by Ryan Brooker tied the game up at 21. The Cadets took their first lead since being up 2-0, when Quinn Smith added a bucket on an offensive rebound. Detric Yoder nailed a three pointer to put Pettisville back on top 24-23. Hilltop answered with a 6-0 run on two scores by Brooker, with a basket by Tim Maneval sandwiched between to lead 29-24.

Once again the Blackbirds responded. Dillon King put back a missed shot, Freshman Graeme Jacoby powered up a shot inside, was fouled, and converted the “and one”. Landon Roth closed out the run with a baseline line jumper to extend the Pettisville lead to 32-29. Riley stopped the bleeding with a short jumper and the period concluded with the Blackbirds clinging to a 32-31 advantage.

Seniors Maneval and Smith made sure their goals of a BBC Title were going to come to fruition on this night. The pair took the game into their able hands accounting for 14 of the Cadets 15 points in the final frame. First Maneval was fouled by Jacoby on a shot attempt and converted the first of two tries to knot the score at 32. Pettisville extended the lead to 36-32 on two free throws by Rupp and an offensive stick back by Roth. Maneval and Rupp traded baskets and with 5:42 remaining the Blackbirds led 38-34.

Austin Schaffner made the second of two foul shots, and Smith turned an offensive rebound into a three point play to once again tie the score, this time at 38 all, with 3:25 left to play

An offensive rebound by Gabe Beck resulted in a basket, made free throw, and also brought about Brooker exiting the game with his 5th foul. The Blackbirds took their final lead of the night 42-41, when King added another lay-up with 90 seconds left in the contest.

King was fouled, but was unable to convert the front end of the 1 and 1. This forced the Blackbirds to foul. With 35 ticks remaining, Smith made the first of two freebies to give the Cadets a 44-42 advantage.

Pettisville got a couple of attempts to tie or take the lead, but were unable to get the ball to fall. After being unable to force a Hilltop turnover, Pettisville had no choice but to send Maneval back to the charity stripe. With 9.9 seconds left, he knocked down both tries to provide the 46-42 final score and ensure the championship trophy for 2016-2017 is going to reside in West Unity!

Hilltop Coach Sam Boehnlein was more than pleased after the contest. “It’s a great feeling. It’s been a lot of years of hard work, sacrifice and dedication with these guys. I think of the six seniors I had my year. They worked their tails off to lay the foundation. The seniors last year continued that tradition. But the seniors we have now set that goal (to be BBC champs). It was tough. Pettisville was psyched up to play on their home court. It was back and forth the whole game, but we put it in the hands of our seniors. We let them go and they came away with the win.”

Ultimately free throws were the deciding factor in the contest. The Cadets converted on 16 of 23 attempts. On the other side, Pettisville only went to the charity stripe 8 times and made 5 of the tries. Boehnlein noted the importance of this statistic. “Foul shots have won us games.

As close as tonight’s game was, we need foul shots down the stretch.

The coach went on to praise his coaching staff as well as a host of others. “The whole school is excited. The students, parents, people in the crowd. We couldn’t ask for a better student section and fan base. It definitely adds to the victory!”

Pettisville Head Coach Brian Leppelmeier was visibly disappointed with the outcome of the contest, but not his team’s effort. “We played hard. We got the ball inside like we wanted to. We just didn’t get all the shots to fall, or the calls we thought maybe we should have only getting to the foul line 8 times. However, that’s basketball. We will keep working to improve and get ready to make a tournament run.”

With the win (and their win Saturday over Fairview) Hilltop improves to 18-1 overall and 10-0 in the BBC, with three games remaining, including two BBC contests. They also achieved their goal of getting the second seed in the District tournament. The Cadets will play the #13 seed, Emmanuel Christian, on March 1st at 8 pm at Bryan High School.

Pettisville falls to 11-9 overall (after falling to Hicksville Saturday night) and 8-3 in the BBC. They have games left at Wauseon and North Central. The Blackbirds got the 7th seed and will open tournament play on February 28th, when they travel to Swanton High School to play conference foe, and #9 seeded, Fayette at 8 pm.

Smith led Hilltop, and all scorers with 19 points, while Maneval was close behind with 14. Riley ended with 9 points, including 7 in the first half. Brooker, who spent most of the night in foul trouble ended with 3 points, while Schaffner added a free throw.

Pettisville was led by guards Yoder and Rupp who both finished with 10 points. The double, and sometimes triple, teams held Beck in check as he finished with 4 points. Roth and Jacoby added 5 points each, while Vickery and King tallied 4 points apiece for the Blackbirds.

In the JV contest, the host Blackbirds triumphed over the Cadets by a final score of 43-30. Sam Rychener led Pettisville with a game high 19 points. Eli Grieser also reached double figures by scoring 11 points. Joel Sauber led the way for Hilltop with 9 points.

Kent Hutchison may be reached at publisher@thevillagereporter.com