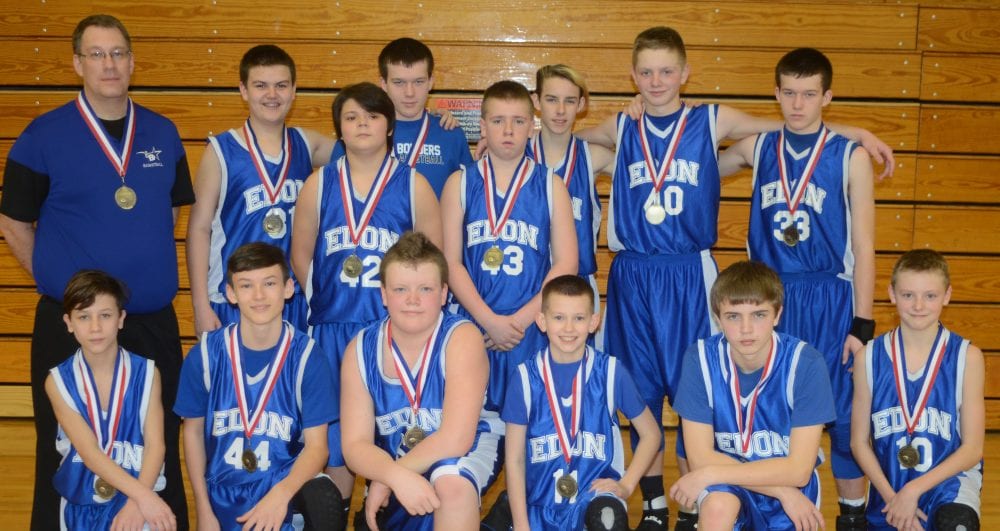 To see the two teams warming up before the start of their February 11 seventh grade BBC title game, you might think that the Edon Bombers verses the Fayette Eagles was actually the Gullivers versus the Lilliputians. The Bombers held height advantages at every position, and looked to go over and through the Eagles. Fayette brought two things to the table that Edon struggled to match though…sheer moxie and a superior team speed that had the Boys in Bomber Blue sometimes looking like they were swatting at flies. Edon took an early lead into the half, but were unable to get Fayette out of the rearview mirror. It took overtime before the Bombers were finally able to suppress the Eagles for the game and the title, 45-40.

The biggest guy on the court, Edon’s Drew Gallehue, also proved to be the biggest presence right out of the gate. Fayette was unable to find a solution for the Bomber paint pounder, who singlehandedly matched the Eagles’ team offensive output in the first period. Gallehue had 12 of the 21 Edon points at the half, but the Fayette boys had a rude awakening planned for the second half.

Fayette came out of the locker room in full out overdrive, and the Bombers were stunned by the hornet’s nest that they had awakened. Quinn Mitchell drained a pair of treys in a third period that saw the Eagles erase the deficit and send the game into the final frame tied at 27. Elijah Lerma connected on a pair of field goals, and Troy Shoemaker added another to lead the Eagles to a 10-10 draw with the Bombers, sending the game into overtime. In the extra frame though, Gallehue landed 4 of Edon’s 8 points as the Bombers were finally able to hold off the high speed dynamo of Fayette.

Gallehue was dominating in every quarter of the contest, landing a game high 28 points for the BBC Champion Bombers, with Henley Dye adding 8. Mitchell accounted for a team high 15 for Fayette, with Lerma knocking down 14.