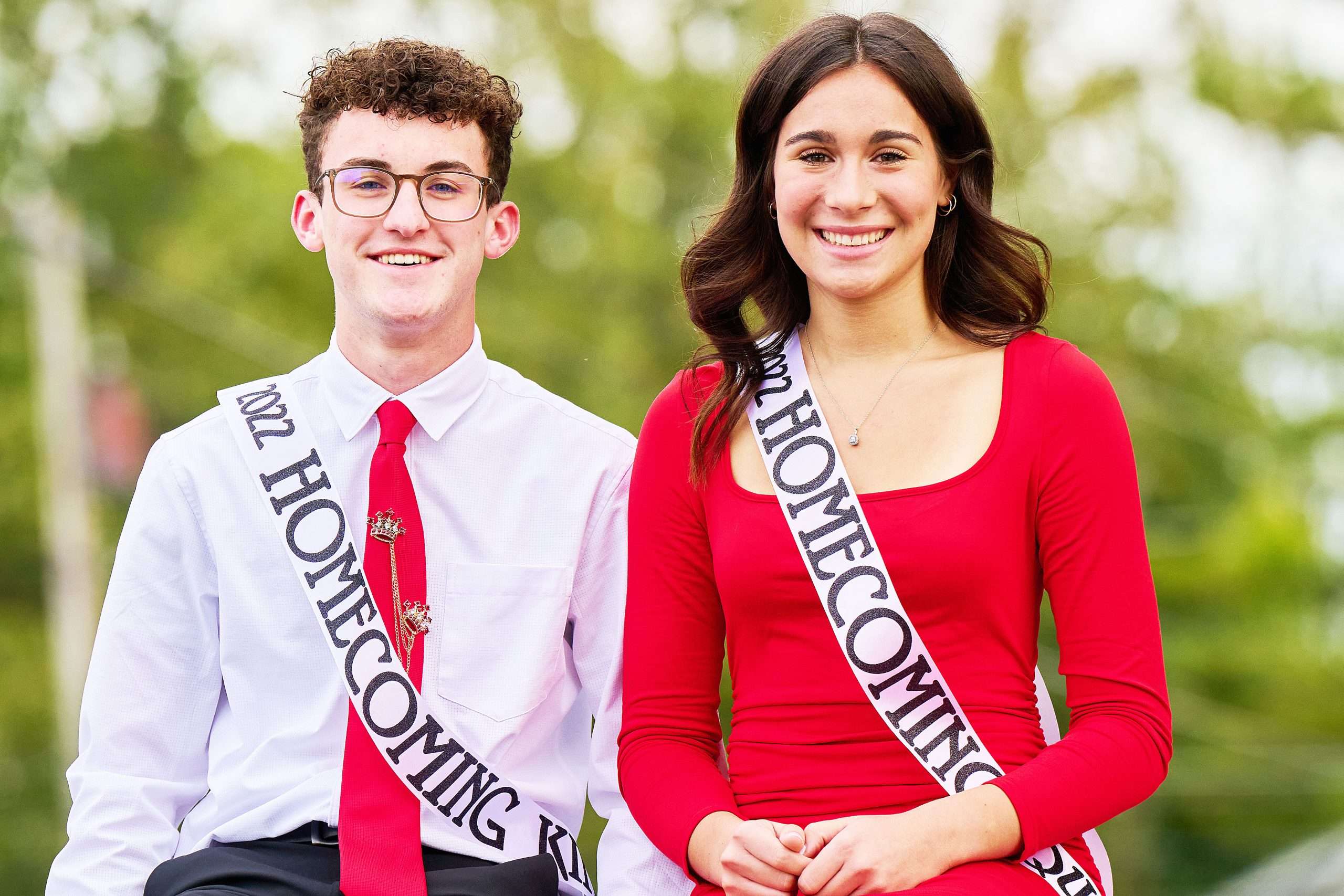 First announced was freshmen attendant, Brynn Rodriguez, and her escort, Arend Schuurman driven by Elizabeth Horton. Brynn is the daughter of Josh and Emily Rodriguez.

While in school, Brynn has participated in volleyball, basketball, and track. She serves as her class president, and is on student council, where she serves as treasurer.

In her spare time, Brynn plays club volleyball, is in 4-H, and enjoys hanging out with her friends and watching TV. Her future plans are to attend college and get a job in the field of Criminal Justice.

Arend is the son of Tom Schuurman and Elizabeth Horton. His school activities include being active in marching band, the school drama club, and track.

In his spare time, Arend says you can find him having fun with friends and family, and working. His future plans right now are incomplete; as he continues his studies, they will become clearer.

Next, was sophomore attendant, Eleana VanArsdalen, and her escort, Cameron Schlosser, driven by Mike Hand. Eleana is the daughter of Bruce and Rhonda VanArsdalen.

While in school, Eleana has participated in volleyball, basketball, softball, and Student Council.

In her spare time, Eleana enjoys hanging out with friends and family, going shopping, watching movies, and taking naps.

Her plans for the future include attending college to become a guidance counselor or school psychologist.

Cameron is the son of Emily and Andrew Schlosser. Cameron’s high school activities include playing football, basketball, and baseball, being in FFA and on the school yearbook.

His spare time is spent listening to music, hanging out with friends and family, watching movies, and playing video games with his homies. In the future, Cameron hopes to go to college and major in education.

Junior attendant, Alora Siegel, and her escort, Dalton Bauer were next driven by Christy Saul.

Alora is the daughter of Matt and Ashley Siegel. Alora’s high school activities include playing volleyball, serving as her class vice president, being a member of student council, FFA–where she also serves as vice president, and 4-H–where she is president.

She is also a student aide in the Kinder Cadet classroom. In her spare time, she works at Klinger Pharmacy, spends time with family and friends, enjoys shopping and weekends away, and works on her hobby in welding.

In the future, Alora plans on obtaining her Associate Degree of Science through CCP. After that, she plans to attend college and major in pharmaceutical sciences or becoming a physician.

Dalton is the son of Greg Bauer and Justin Oxender. While in school, Dalton has enjoyed playing football and serving as the president of his class. In his spare time, you can find Dalton with his girlfriend, watching football, playing video games, or building with Legos.

His future plans include going to college and finding the career he desires.

Next, was senior attendant Madisyn Routt, and her escort, James Bell, driven by Scott Horton.

Madisyn is the daughter of James and Melissa Routt. While in high school, Madi has taken part in student council, being a class officer, FFA, and playing volleyball, and softball.

In her spare time, Madi enjoys hanging out with friends and her sister, Kenley, watching true crime documentaries, shopping, and going to the lake.

Her future plans are to attend Bowling Green State University or Miami of Ohio to major in kinesiology to later become a physical therapist or dietitian.

James is the son of Jim and Kristy Bell. While in high school, James has served as a class officer and student council member.

He is on the National Honor Society, the Golf and Academic teams, E-sports, the Archery team, where he earned the highest archery score for the Hilltop boys at State 2022.

He attended Buckeye Boys State, and has participated in State Science Day, where he received many awards. In his spare time, James studies American Kenpo Karate and is currently ranked as a Second Degree Black Belt.

He has been a member of the Successful 4-Hers and has served as president, vice-president and health and safety officer. In the future, James plans to attend college for middle school education.

Next up was the 2022-2023 Homecoming Queen, Miss Gabrielle Rodriguez, and Homecoming King, Mr. Aiden Funkhouser, driven by Craig Bailey.

In her spare time, Gabby enjoys playing club volleyball, participating in 4-H, watching crime documentaries, hanging out with friends and family, and of course, jamming out to Harry Styles with her baby sister, Cece.

Her future plans include attending college to study Business Management or Early Childhood Education as she also continues her volleyball career.

Aiden is the son of Stan and Stacie Funkhouser. While in school, Aiden has been a member of the FFA, student council, Cadet Chorale, and he has also played basketball and has run cross country.

In his spare time, Aiden enjoys playing video games, running, spending hours in bed–watching TikToks and Netflix movies, hanging out with family and friends–mainly Abby and Gabby–just so he can play with Cece.

In the future, he plans to continue working and gaining experience in home remodeling, so he can pursue a career in Home Remodeling and Interior Design.

Alex currently works at Community Hospitals in Bryan as a patient care tech. and is working toward her degree in nursing in college. Carson is currently a member of the workforce.

Ramsey is the daughter of Tom and Aundrea Gamboe. In her free time, she likes to draw and dance, and she hopes to one day be an Art teacher.

Tate is the son of Shawn and Jodie Sabins. In his free time, he likes playing with his Army men, stuffed animals, and Nintendo. One day, he hopes to become a restaurant guy. 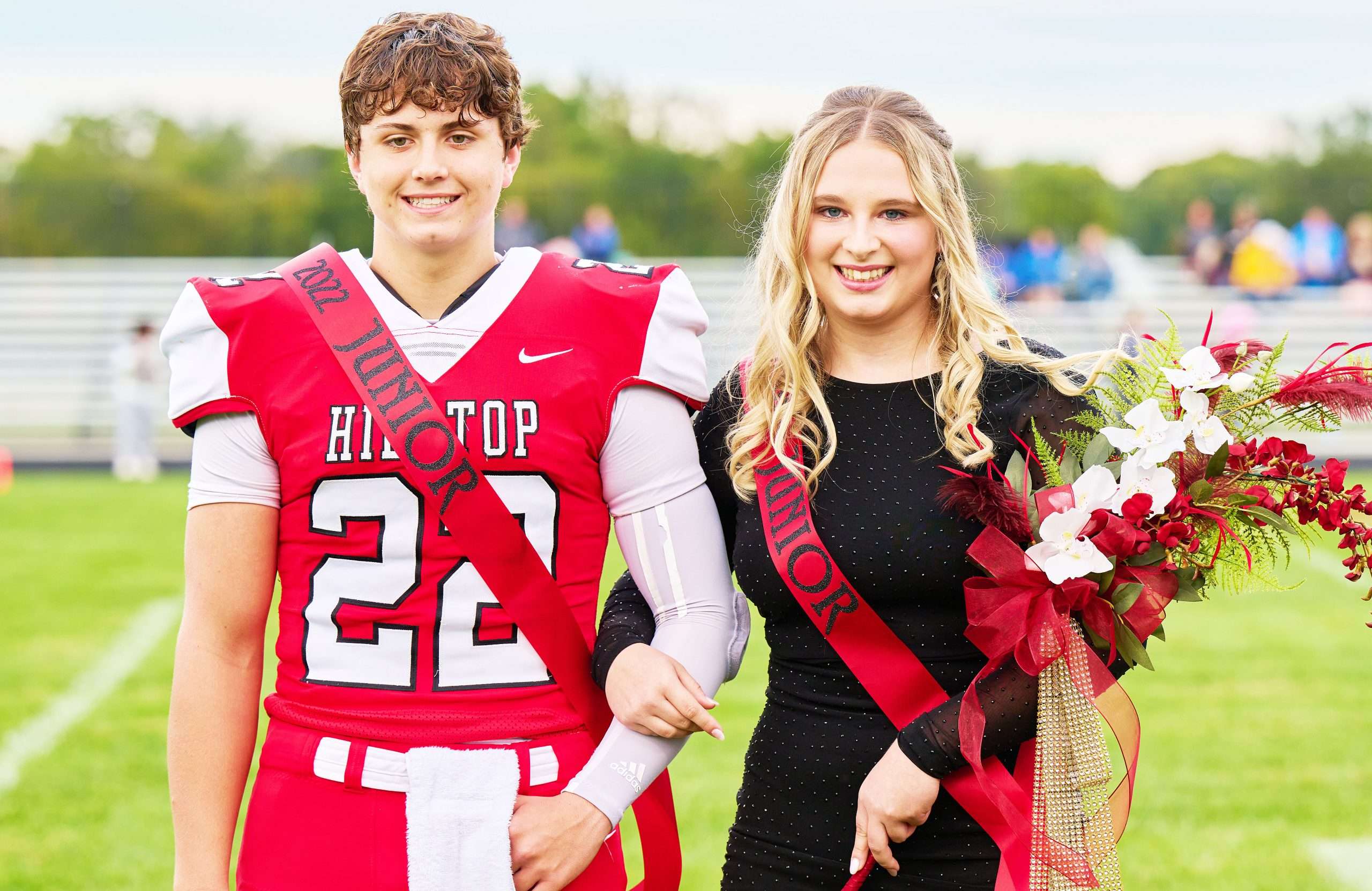 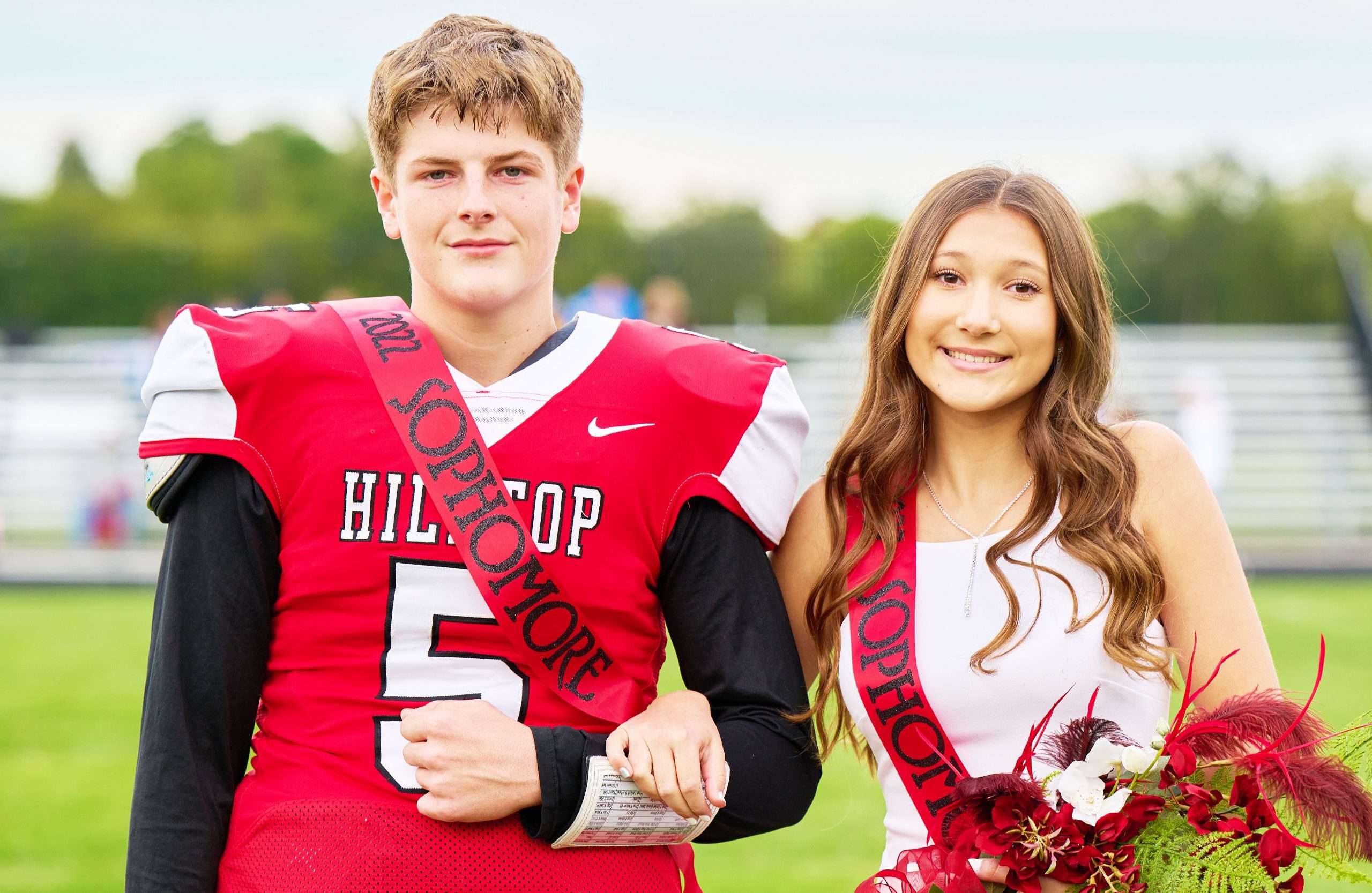 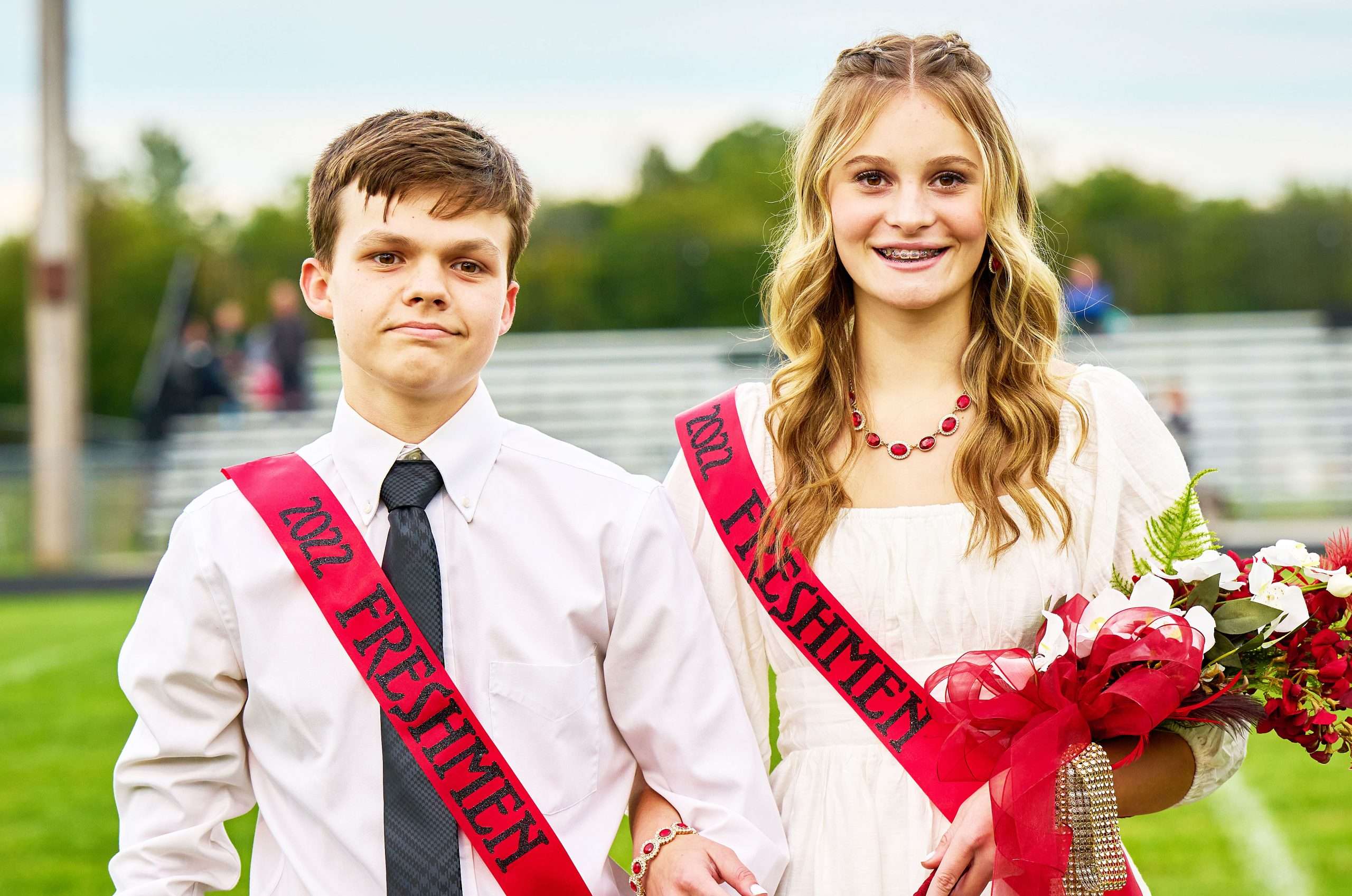 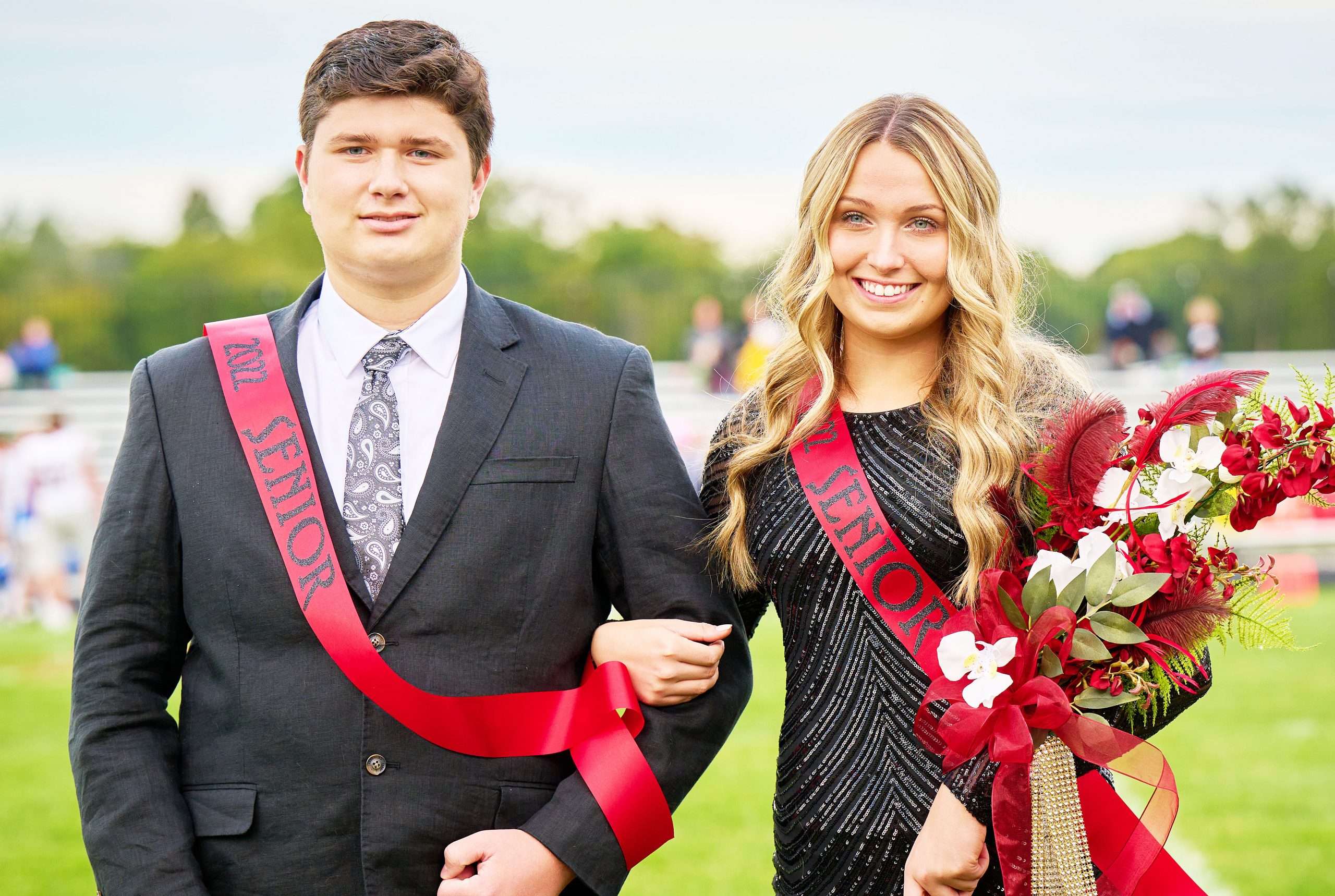