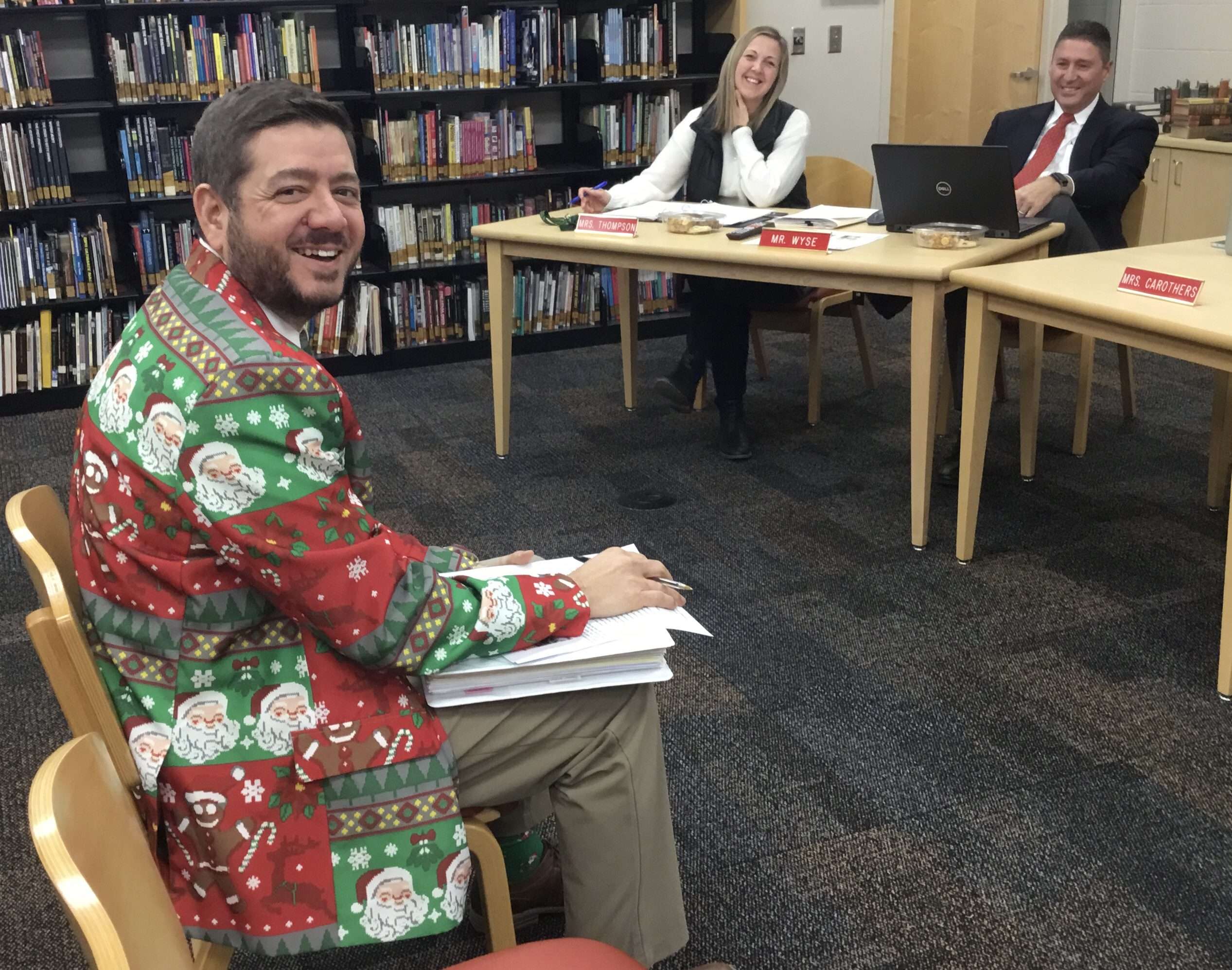 FLASHY FOR CHRISTMAS … Hilltop Principal Mr. Steve Riley showed up for the December 20, 2021 School Board meeting dressed in a bright Christmas suitcoat which the students had enjoyed at school that day. Seen in the background, enjoying a laugh over his attire, are school treasurer Traci Thompson and Superintendent Jim Wyse. The board members (not seen in the picture) were all in on the laughter with Mr. Riley. (PHOTO BY REBECCA MILLER, STAFF)

All board members were in attendance for the last school board meeting of 2021 at West Unity Schools on December 20, 2021.

Superintendent Jim Wyse gave his report, offering a second opportunity for public input for the 2022-23 tentative school calendar, gave the Board a chance to comment on Tentative Board meeting dates for 2022, and presented the minutes from the quarterly Business Advisory Council meeting.

High School Principal, Steve Riley reported to the Board that the Joint pep band performances done by Hilltop and Pettisville pep bands at the home Varsity Boys game on Thursday, December 16 and then at the Pettisville High School Away girls’ game on the seventeenth both went well.

He felt it was “a great opportunity for students from both schools to collaborate and grow as musicians.”

He congratulated all the students who were named Student of the Month by their teachers for the month of November. The Christmas for Kids Toy Drive, sponsored by Student Council and 98.1 The Mix, was a huge success. He thanked Miss Yoh, and the Millcreek West Unity community for continuing to support this event.

Hilltop FFA students completed a Canned Food Drive for the Hilltop Food Pantry over a two week period and the students brought in over 4500 cans!

Current enrollment numbers for the 2021-22 school year are presently totaled at 241 students, which is down three from last month.

As Ms. Worline, Elementary principal, could not be present, Mr. Wyse shared her report. The fifth through eighth grade Spelling Bee was held on December 9th with fifth grader Tina Dickinson getting first place. Second place went to sixth grader Savannah Thompson. The two will move on to the Williams County Spelling Bee.

The West Unity Lions Club poster contest which is held each year for the them of “Peace” was won by Savannah Thompson, followed by Brooklyn Gault and Adrianna Beaverson. Savannah’s poster was then chosen as the district winner and will go on to the Ohio State competition in the spring.

The fourth grade took a field trip to Wild Winds Buffalo Preserve, which fit in nicely with their Ohio Social Studies curriculum.

The first through second grade “Grinch Day” was postponed due to December 10 being cancelled for fog. On Monday, the Grinch “left his impression on many classrooms by turning things green and making messes.

The students enjoyed many food, craft and academic activities on this day.” Current enrollment in the elementary side of the building is at 298, which is up three this month.

The board approved the following items which were on the consent agenda:

-November 2021 meeting minutes; Annual membership with Ohio School Boards Association
-Purchase of Student Chromebooks for $34,960.50, using the Small Rural School Achievement Grant (formerly known as REAP)
-Resolution accepting the amounts and rates as determined by the Budget Commission and authorizing the necessary tax levies and certifying them to the County Auditor
-Appropriation modifications
-Reassignment of Kimberly Warner from Intervention/Tutor to substitute teacher for a teacher who will be on extended leave, and to be paid at the same hourly rate as her current position. Once the teacher returns from leave, Kimberly Warner will return to her intervention/tutor position
-Accepted following donations – two American Flags from American Legion; $300 to the Hilltop Food Pantry from William Havelec; Winter Coats from Dorothy Davis; $200 from WC Dairy Association to the Family and Consumer Science Class
-MOU with the MCWU Education Association regarding the use of the OTES2.0 and OSCES Evaluation systems effective July 1, 2021-June 30, 2022
-Overnight stay for the Varsity Softball Team March 25-27, 2022 in Cincinnati, Ohio

The board chose to set the Organizational Meeting for January 10, 2022 at 6 p.m. in the library with Heather Jones as President Pro Tem. They then entered into Executive Session for the purpose of employment matters.

No action was taken and the meeting adjourned at 6:29 p.m. The next board meeting will be held on January 10 immediately following the organizational meeting.

Share. Facebook Twitter Pinterest Email
Previous ArticleARCHBOLD BOARD OF EDUCATION: Approval Given For Community Library Replacement Tax To Be Placed On Ballot
Next Article EVERGREEN BOARD OF EDICATION: Board Approached About Making Home Games Free To Students