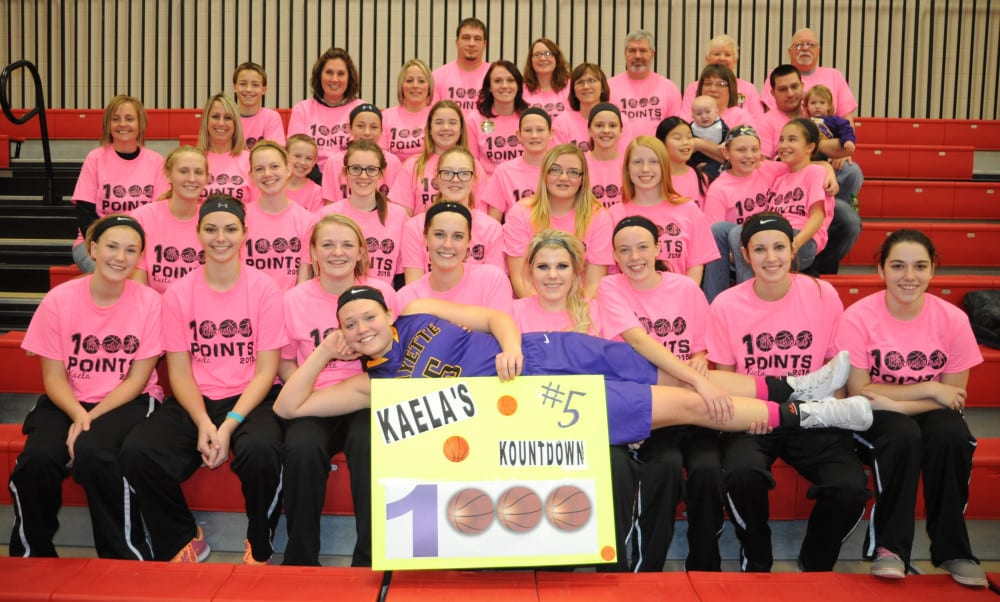 Supposedly, it was a mistake.

On the evening of December 18, the Fayette Lady Eagles took their undefeated record westward to The Bunker in Hilltop High School to take on the BBC rival Lady Cadets. The visiting Lady Eagles came out of the gates firing on all cylinders on both offense and defense, and it didn’t take a doctorate in analytics to see that on this evening, the hometown girls were simply overmatched. Everyone in purple and gold was lighting up the scoreboard on one end of the court, and frustrating the Lady Cadets’ offense on the other. Then, something happened in the course of the game that, for the uninformed, seemed like a strange hiccup.

The clock on the east wall read 8:04 p.m. when Fayette’s Kaela Seiler drove from the right side of the key, into the paint and up for a layup that made the score 23-5 with 3:34 remaining in the first half. It was seemingly just a layup in the middle of a blowout, but before the ball had made it all the way through the net, the Fayette cheering section erupted. Kaela followed through on her layup, turned around, and immediately began backpedaling in standard basketball style.

Play continued, and a few seconds later, the announcer explained the strange explosion from the Lady Eagle faithful. That layup by Kaela Seiler added points 1,000 and 1,001 to her career totals at Fayette. Supposedly it was a mistake. The timekeeper was to blow the horn and stop the clock. Play was to stop as the announcer broke the news about Kaela’s watermark layup, and she was to have been presented the game ball. It was an ‘oops’ moment, but you would have never known it by watching Kaela. She was all business. Her team was in action, and after scoring, she was joining them on the defensive end. It wasn’t about her, and she put that on display for everyone in the house to see.

Scoring 1,000 points makes you an elite player, but Kaela is an elite only by what the stat books say. Style is not a stat, and her style is 100 percent blue collar. An elite is considered to be in a class above everyone else, while one who is described as blue collar IS that ‘everyone else’. How does one become an elite, while still being blue collar? No need to scratch a bald spot onto your head. Just go catch a Fayette Lady Eagles game, and watch #5…you’ll soon see.

Kaela is all about her team, and with the opening tip, she is all about team business. You want to deny her a path to the hoop? Brace for impact. You want to challenge her for a rebound? Don’t come alone. Bring help…and a lot of it. Elites frequently prefer to avoid physical contact and floor burns. That is the stuff for the blue collar crowd, but that is also where Kaela is every game. By all means, keep an eye on that #5. See if she is able to remain on her feet for the entire time that she is in the game. It is all about the needs of the team, right down to the final buzzer.

A senior at Fayette, Kaela is the daughter of Dan and Pam Seiler, and the sister of Levi and Marissa. Now that she has joined teammate Taylor Griffiths in the 1,000-point club, she reflected on what brought her to this level. “I think that it means that a lot of the hard work that I put in over the years has paid off, as has the hard work that my family has put in for me,” she said. “They all have helped me since I was in the third grade. My dad used to coach us, and Taylor Griffiths’ dad.” Two dads who coached their girls in grade school, with both daughters posting 1,000-plus point careers. Coincidence? Hardly!

Everyone who strives to succeed has a role model or a hero that they look up to, and Kaela is no different. “I remember when Stephanie McCord got 1,000 points,” she said, “…and I told my dad that I was going to do that some day. Stephanie is one of my heroes, because she made me want to do it. My dad is also my hero, because he always believed in me. He pushed me a lot.”

A 1,000 point career is something that most will never attain, nor would they trade it for anything. Such is not the case for Kaela, who without hesitation said, “I would trade it for a state title.” There it is again…team first.
Putting everything into the team means sharing the successes, but it also means sharing the frustrations. Anyone who knows about the Fayette Schools and the community at large also knows that it also means sharing in deep heartbreak and mutual support. After a career of highlights, Kaela recalled two events that were the toughest points in her career as a Lady Eagle. The first was dealing with the adjustment of being a varsity member during her freshman year. The second was an event that shook not just the team, but the school, and the entire community of Fayette…the passing of senior team leader, Mikayla Smith. “During my sophomore year one of my teammates passed away,” Kaela recalled. “It was really hard to adjust to that, and step up to be leader, since she was our leader. I think it became easier, because our team really came together. It was made easier because my teammates are really great…but that time was the hardest part of my career.”

What is it like to have Kaela as a player on the team that you coach? Fayette Head Coach Scoop Miller didn’t mince words. “It’s a blessing,” he said without hesitation. “She’s been a great example for all of our kids, and she has been a great teammate. She’s been a great leader. I don’t take any of that for granted. She’s a real special kid, who has put in a lot of time, and the success that she has had has not been by accident. It’s because of all the time, effort, and hard work that she’s put in.”

Coach Miller continued, “To me, what really stands out is that obviously she is an outstanding player, but she is so unselfish. She is the most selfless player that I have ever seen. She just wants to see the team do well. If that means scoring points, then she scores points. If it means getting rebounds, then she goes and gets rebounds. If it means playing defense, then she plays defense. What makes her so incredible is, yes, she has 1,000 points…but she also has over 500 assists, and 500 rebounds. That’s incredible. I have coached other thousand point players before. I had several in Archbold, and I am blessed with two here, but it’s just amazing that the focus is never on her. It’s never been about her; it’s always been about the team doing well. When you get something like that as a coach, that’s always something very special.”

Somewhere in the stands at a Fayette Lady Eagles’ game, sits a little girl with her dad…watching #5 intently. As it was years ago for Kaela watching ‘Scruffy’ McCord weave her way through defenses to rack up over 1,000 points, so it will be for this elementary school age girl, watching with her dad, and dreaming of suiting up in the Purple and Gold. For whoever she might be, Kaela has advice on your future as a Lady Eagle. “I would tell them that it is definitely possible,” she said. “All the records are there for you to break. Even if I am NOT here at Fayette, I am still rooting for you. Be the best that you can be, and always work hard. Appreciate your coaches and your teammates, because you’re going to miss it. I know…I am already thinking about how sad that I am going to be, because we five seniors have been playing together for so long. We have been together since third grade, getting beat up by boys’ teams. Enjoy it, and work hard!”

Timothy Kays may be reached at tim@thevillagereporter.com