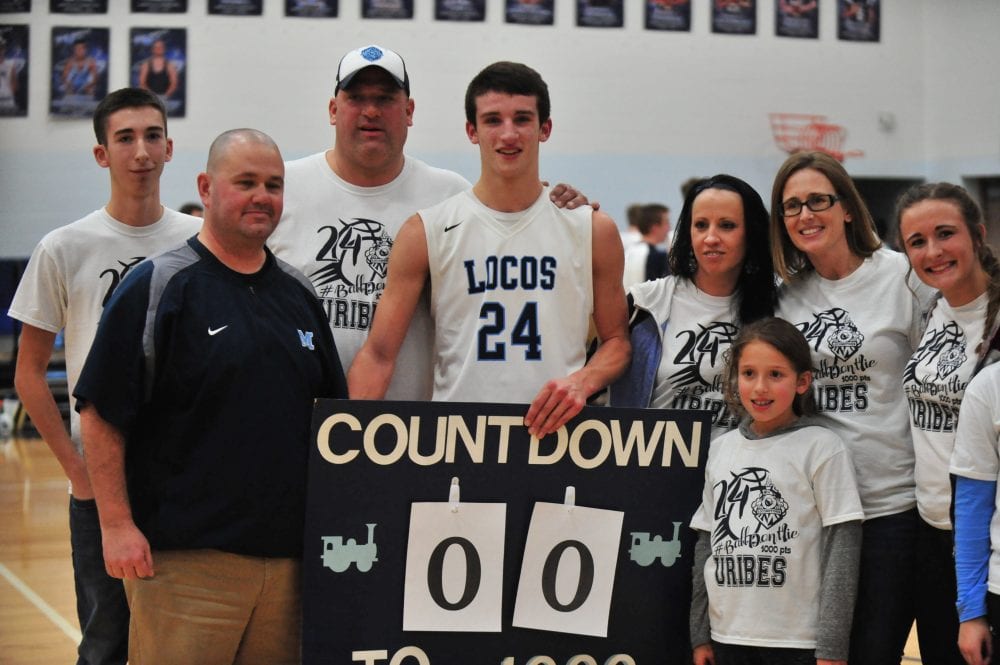 In his wildest dreams Montpelier’s Kolden Uribes couldn’t have imagined that Friday, February 17, would turn out like it did. The junior came into that night’s contest against BBC rival Edon needing 33 points to surpass the 1000 point scoring plateau and join teammate Michael Blake, as well as six former Locos, in the exclusive club.

In his final home game of the season, Uribes got off to a great start dropping in 17 points in the first half as Montpelier took a 43-32 lead into the locker room. That was just the beginning for Kolden. He continued his assault on the Bomber defense in the second half. Late in the third quarter Uribes brought the crowd to their feet when he nailed a three pointer from the top of the key. In the process of completing the attempt, he was fouled by Blake Thiel. Uribes sank the throw to complete the atypical four point play. For good measure Uribes showed the night wasn’t just about his offense. With time running out on the third quarter he blocked a three point attempt by Austin Keiss to prompt the fans to rise once again.

Needing just two points to move into the club, Uribes drove hard to the basket with 5:41 remaining in the game. Although the attempt fell off the rim, Uribes headed to the line for two free throws. Like it was just any other trip to the charity stripe, Uribes calmly dropped in both tries. As the second shot went through the net Kolden received a bear hug from fellow 1000 point scorer, Michael Blake. That embrace, preceded Uribes being mobbed by teammates, as well as a toilet paper shower provided by the Montpelier student section. After more hugs, first from Head Coach Taylor Muehlfeld, then Kolden’s father, mother, and other family members, Montpelier Athletic Director, Joe Brigle, presented Uribes with the game ball.

Following the celebration, the game continued with Montpelier holding a commanding 79-47 lead. All that was left to decide was if Uribes was done for the night or not. He briefly left the contest, followed by the three seniors, Blake, Colin Rockey, and Alec Waterston, who all received a nice ovation from the crowd. However, with the single game scoring record of 40 points, set by Jon Mick in 1987, within reach Uribes was inserted back into the contest.

If he hadn’t caused enough excitement already, Uribes dribbled the ball from the right wing to almost the exact spot where he made the milestone free throw. Only this time he pulled up with three Bombers surrounding him. Undaunted by the defense, Uribes nailed the jumper with 58 seconds left in the game for his 41st point of the night and along with it a new single game scoring record!

Obviously given the reaction of the crowd, and the number that were in attendance for the special event, Uribes is a fan favorite. It doesn’t take long to understand why. Montpelier Athletic Director Joe Brigle shared his assessment of Uribes. “Kolden is an outstanding young man and student-athlete. He is a very humble person who is highly motivated. He makes everyone around him better. His demeanor is very infectious and I think our kids feed off his competitive spirit.”

When asked what scoring 1000 points, most notably in just his junior year, meant to Uribes he explained. It means a lot to me. Especially doing it my junior year, it just really proves the point of when people say you can do whatever you put your mind to. You can achieve your goals and dreams if you choose to. Countless hours in the gym do pay off.”

Taking it one step further to the question if breaking the school record had entered his mind, Uribes shared that had been on his radar. “It was honestly a thought me and my dad have had nights before the game. The nights before the Edon game, me and my dad have talked about scoring both 1,000 and getting the 41 points for a school record. It was a goal we set and I was determined to achieve. Just rose to the challenge on the big stage.”

To a casual observer who really doesn’t know Uribes, these responses may appear to be self-centered or conceited. However, if you truly understand Kolden it is obvious that isn’t how he ticks.

Montpelier Head Coach Taylor Muehlfeld explains. “Kolden’s greatest strength is that he is a competitor and not a selfish player. He facilitates our offense and shares the ball well with his teammates.”

Brigle added, “Kolden makes everyone around him better because he is always one step ahead of most on the court or field. His demeanor is very infectious and I think our kids feed off his competitive spirit.”

Uribes went on to clarify not only what his personal goals are, but most importantly the teams. “I want to lead my team to a District appearance, cut down nets and make my seniors have an unforgettable season. I can’t imagine the game of basketball without them yet and I want to keep the season going for as long as possible. For myself it was to set some records and score 1,000. Also to shoot a higher percentage from the FT line.”

In terms of what he feels are the major contributors to his success Kolden shared his keys. “Early mornings and late nights in the gym. Hours spent in the weight room.”

Uribes self-assessment was affirmed by Coach Muehlfeld. “His relentless effort to get better is the key. Kolden puts a lot of time in on his own, especially in the offseason. He works on his shot almost daily in and out of practice time and the basketball season. He and his dad put a lot of time in shooting and perfecting his offensive game. It also helps Kolden that he is always under control. He is very calm and is a processor. He does not let much affect his game. He is an outgoing young man that is approachable and willing to talk to anyone about anything.”

Mr. Brigle was more than willing to also share his valuation of Uribes. “Kolden is a very instinctive athlete with great composure.
He possesses skills that most high school athletes work hard for but never get. He makes athletics look very easy at times because he is such a fine athlete.

Kolden is a very level headed athlete. Very rarely will you ever see him get too high or too low. He always very even keeled.”

For Uribes, it’s not just about basketball. He has achieved at a high level in the other sports he plays. Kolden has participated in four sports thus far in his high school career, and plans to add a fifth to the number this spring. This season will be the third that Uribes has lettered in basketball, and he should do the same in baseball. He also plans to run track in the spring.

This past fall was another season to remember for Uribes. He not only received his second letter in cross country, but also lettered in football. While quite an achievement in itself, that was just the beginning as Uribes football team won the Toledo Area Athletic Conference Title and the cross country team captured the Buckeye Border Conference Crown. On several occasions during the fall Uribes participated in grueling football games late into Friday night, then he, as well as teammate Michael Blake, turned around, got on a bus very early Saturday morning, and ran the 3.1 miles required for cross country.

The question of what lies ahead after high school is one that Uribes has definitely thought about, but he still has some choices to make. “Although I haven’t decided yet. I would like to attend a D1 or D2 school for either baseball or basketball. Right now I hope that will be at The University of Findlay. We’ll see what happens over the course of the next year.”

Uribes also wants to make sure the legacy he leaves is focused on more than just his athletic prowess. “I want to be remembered for being the best example I could be, and that you can never settle or believe you are good enough. That you can always strive to do better. I want people to remember my game, but more importantly who I was as a person.”

Kolden also wanted to make certain to thank everyone who has attributed to and shared in his success. “I wish to thank my dad, Steve Lamberson, my family, my coaches and the support of my community and school. My life in general is my parents. They have always raised me to be the best I can. With sports my dad, and coaches have always pushed me and have high expectations.”

When asked what the past few weeks have been like given all the attention he and teammate Michael Blake, who scored his 1000th point on February 10th have received, Uribes explained the feeling. “It makes me feel so blessed. All the support and love we receive as players and as a team. Seeing the stands packed is a great thing. The support is amazing and I’m thankful for it.”

The Montpelier fan base certainly appreciates all that Uribes has contributed as well. Joe Brigle expressed his sentiments. “We are very proud of Kolden and all his accomplishments. He still has one more year with us and we look forward to watching him continue to grow as an athlete and as a person.

Coach Muehlfeld echoed those sentiments. “It has been an absolute privilege to coach a player as talented as Kolden and we are very excited to see what the future holds for him and our program.”

There is no doubt that February 17th was a dream come true for Uribes. However, that dream is far from over. It is obviously clear that over the course of the next 15 months Kolden Uribes will continue to make memories not only for himself, but the “Loco Nation”. There is also more than a slight chance that additional records will fall to the able body of Uribes!