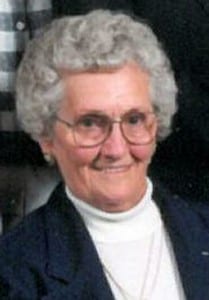 Mary lived her early life in the Fayette area, and attended Zone School. She was employed with Peter Stamping in Fayette for several years, and later retired from Strydel in Stryker, OH. Mary loved being with her family and she enjoyed attending horse races.

In addition to her parents and husband, Wilford, Mary was preceded in death by a son, Fredrick Wilford “Buddy” Baker; two brothers, Orville and Donald Schang; a sister, Bernice Larnard; a granddaughter, Dawn Fruchey; and a son-in-law, Donald Leupp.

A funeral service for Mary Baker will be held on Saturday, October 20, 2012, at 2:00 p.m., at Eagle Funeral Home-Barrett Chapel in Fayette with Pastor Gene Sugg officiating. Interment will follow at Pleasant View Union Cemetery in Fayette. The family will receive friends for a visitation on Saturday, from Noon until time of service.

Those planning an expression of sympathy may direct memorial contributions in honor of Mary to Great Lakes Caring Hospice or the American Cancer Society.

Friends can send condolences to the family online at www.eaglefuneralhomes.com.