The Montpelier Area Chamber of Commerce welcomed newcomers Shelley Davis and Kandace Potts-Salaz to their board of directors at their first meeting of the year on Friday, January 11, 2013. They were elected to a two year term. Chris Lee and Jeanette Hull were re-elected to the board.
In their first order of business, the board elected Susie Osburn as President, Lori Eitniear as 1st Vice President, Kandace Potts-Salaz as 2nd Vice President and Shelley Davis as 3rd Vice President.
Minutes of the last meeting and the financial report for December 2012 were approved. 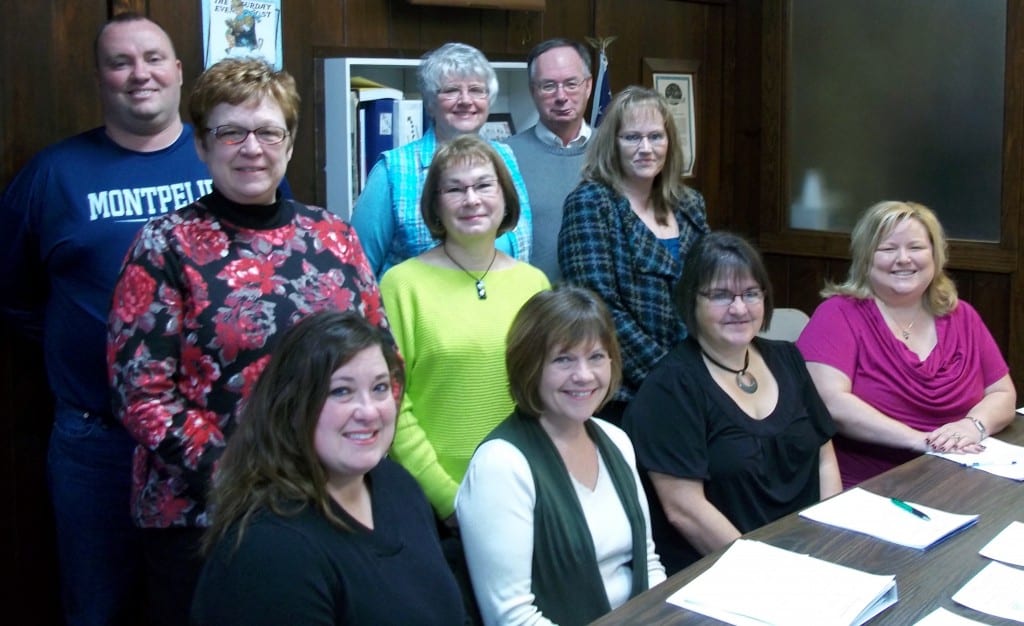 Representing Village Affairs, Kurt Roan reported that the village was working with WEDCO on some projects. He added that Phase 3 of the sewer separation project would be starting next week starting with Fairview Street. He said that the town was still working on deciding a location for installing a solar field.
WEDCO (Williams County Economic Development Corporation) representative Steve Raymond updates the group on their plans for the Business Expo set of March 6 at the Ramada Inn. Thirty businesses have reserved a booth so far, with hopes for at least 50 displayers. This will be a tri-state event for the first time this year, and businesses from Indiana and Michigan have already reserved some spots. TV 26 will be on site, and they are working to get radio coverage. Plans are in development to open the first two hours to high school students so that they can see what businesses require of incoming employees. As many graduating high school students end up working in the manufacturing field, the business expo hopes to show them that rather than being a boring job, many businesses are highly technical and may require new skills. The expo will show them what is available if they should choose a manufacturing career. Raymond also talked about the Route 6 Roundtable, a group of businesses that meet at rotating locations to discuss issues in manufacturing.
Reverend Dave Tilly of the Montpelier Ministerial Association shared that Montpelier area churches had a very good Christmas and were able to provide food and gifts during the season to many families who would otherwise have not had a good holiday.
With great interest, the board listened to Montpelier School’s Superintendent Jamie Grime who talked about arming staff at the school. Since the issue had been voted upon by the school board just two days before, Grime had since received 250 emails, many phone calls, and has been contacted by newspapers all over the state. He reported that response has been 99% positive, and for those who objected, he had replied that he doesn’t like the idea of firearms in school either, but that as a superintendent and also a parent with three children of his own in the school, he had to make a tough decision based on the safety and security of his students. He commended the board of education for making a hard decision. He noted that “now that we have done it and blazed a trail, this (decision to arm personnel) will become more common.” The school is as secure as any in the state presently. He gave Chief of Police Jeff Lehman credit as well, and said that trained and armed civilians can be just as effective as officers. There will be training given by Tactical Defense Institute for those who will be armed. This measure will add security at a minimal cost to the district. Of the decision to arm staff, “We started the conversation.” said Grimes, “We sparked the debate.”
Montpelier Library representative Gloria Osburn told the board about upcoming events. The Frostbite Film Festival, featuring movies for children aged 6 – 12, rated G and PG will be shown every other Monday from 3:30 to 5:30 p.m. beginning January 14 and running through March 25. They will show Happy Feet on the first movie, and the next film will be March of the Penguins to be shown on January 28. Children under age 6 must be accompanied by a parent. More info can be found at www.montpelierpark.net.
The library will have free crafts for children 1-3 p.m. on the following days, which would otherwise normally be school days. School will not be in session on these days due to holidays or other events: Monday, January 21; Thursday, February 14; Friday, February 15; and Monday, February 18.
The Montpelier Library also has activities and events planned for adults as well. On January 17, a Thursday Morning Knitting Club will begin for any individuals who crochet, knit, or do needle work of any kind. Participants may bring whatever they are working on for a “Show and Tell” or if they are struggling with a project, they can receive advice and help from more experienced crafters. Coffee, tea, and cookies will be provided.
On January 23 at 2:00 p.m., Nancy Stahl will present a Tea & Talk at the library where she will share her knowledge of teas of the world. There is a $5 charge, and tea and refreshments will be provided. Those attending may wear a tea hat, and should bring their favorite tea cup or mug. The event is being sponsored by Friends of the Montpelier Library, and reservations for the event are required. Those wishing to attend should call the library at 419-485-3287.
In old business for the Chamber, they are continuing to prepare for their annual banquet on February 28, 2013. Committee members met to work on plans after the regular Chamber meeting.
Chamber board members also agreed to arrange a time between the officers and Executive Director Terry Buntain to discuss the budget for 2013.
The next meeting of the Montpelier Area Chamber of Commerce will be held on Friday, February 8, 2013, and 8:00 a.m. in the Chamber office.

Be the first to comment on "Montpelier Chamber Elects Officers, Hears From Superintendent On Arming Staff"