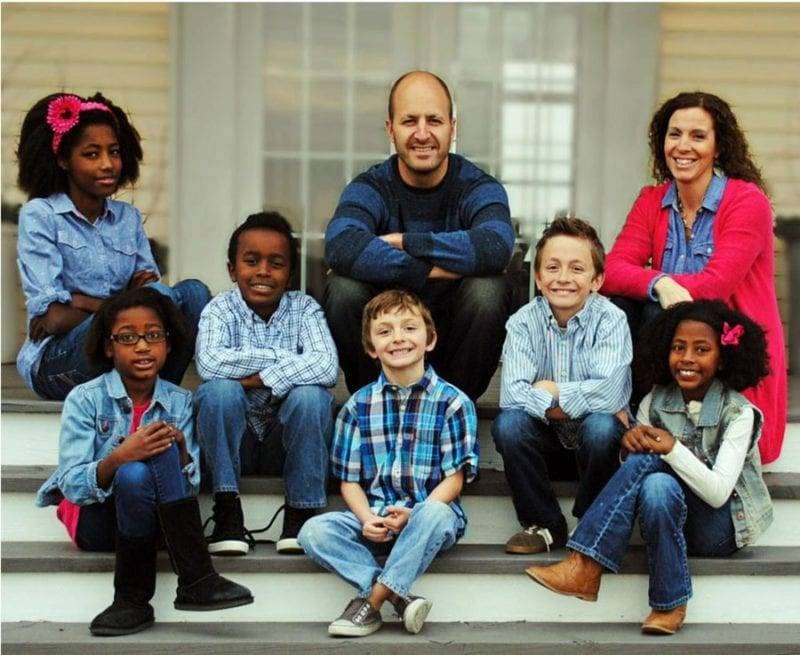 By: Allyson Hutchison
THE VILLAGE REPORTER

Montpelier residents Derek and Wendy Walz are invested in a rather large project. The Walz are proud parents of six beautiful children, four of whom were adopted from Ethiopia. Despite the hectic schedule that comes with having so many children, the Walz are able to carve out time to lead an annual mission trip to Africa as well.

Their story begins around Christmas in 2009. “We felt God calling us to add to our family through adoption,” Derek stated in an email. The family followed the calling, unsure of where the journey would lead them. After a great deal of research and time spent praying, Derek and Wendy felt that God was directing them to Africa. They decided there was one adoption program that was better established in Africa than the rest; the one located in Ethiopia. The next step for the Walz was to get in touch with an adoption agency here in the United States who then walked the family through the process of adopting a child. Derek and Wendy provided the agency with a range of ages and the gender of child that they were hoping to adopt. The Walz couple was then placed on a list, waiting to be contacted when a child became available for adoption that fit their description. Once there was a match, the agency supplied Derek and Wendy with a photo and basic information about the first two children they adopted as well as a brief amount of time to decide whether they truly wanted to adopt the children or wait for another match; they decided to adopt.

A few months later, Derek and Wendy were traveling to Africa for the first time to meet theie future children, Ashenafi and Mekdes, who they nicknamed Ash and Mekie.

This was also the expedition that would bring Ash and Mekie to the United States and spur the idea for mission trips to Ethiopia. “That first trip to Ethiopia really opened our eyes a little farther to the world we live,” explained Derek. “We began to pray about how we could get more involved in Africa to make some sort of a difference for the 4.7 million orphans living in Ethiopia.” It soon became apparent to the Walz that they should partner with Children’s Hope Chest of Colorado Springs.

They sponsored a Care Point (a gathering center for children) in Ethiopia called the “Tullo-Yehiwot” Care Point. This Care Point has provided 169 children, who come from one of the poorest places in the country to be fed, receive medical treatment, gain an education, and study Christian discipleship classes. They have supported this Care Point for four years. Their efforts have included: fundraising to build a school, piping to give access to clean water, providing the children with a new playground, traveling to Ethiopia annually to meet and share their love with the children, and finding patrons to sponsor children to be in the program.

Since their commitment to Children’s Hope Chest, Derek and Wendy have also adopted two young girls, Aster and Genet, who have been part of the Walz family for a little more than two years. “We feel very blessed to have the diversity in our family that we do, and it has brought us so many adventures that we would have missed had we not took that first step of adoption,” Derek admitted with elation, even though their path has had some challenges. Wendy has homeschooled the children for the past two years because the girls were academically behind where they needed to be when they came home to the Walz. This also enables the family to teach their children the beliefs and values that they cherish. The family has also faced challenges on a behavioral level from the children having spent so much time in an orphanage. Overall, the Walz would not trade a moment of their experience for anything.

Derek and Wendy’s next mission trip to the Tullo Care Point will be from January 17th to the 23rd involving eight people from the Solid Rock Church in West Unit, Ohio and an additional person from Fort Wayne, Indiana. They are also looking for 76 more monthly sponsors to add to their immaculate 93 already. If you want to get invested in their mission, you can contact Derek Walz at dwalz26@hotmail.com

Allyson may be reached at publisher@thevillagereporter.com

Learn Something New This Year At Sauder Village