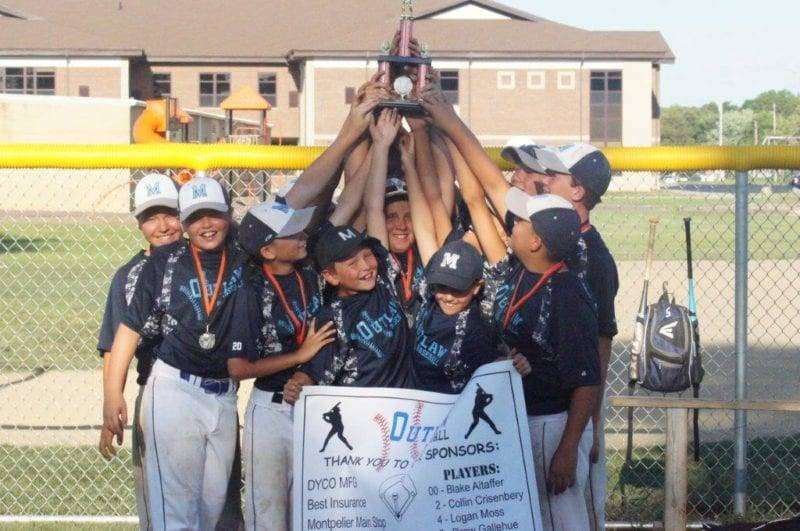 Montpelier Outlaws is a group of ten young men that didn’t want to quit playing baseball yet. It started last year with a single tourney to see how we stacked up.
With sponsorships from several local businesses and individuals we are able to continue playing deep into September. We are playing at the 12u level. There are 4 kids from Edon and 6 from Montpelier.

With the local ball tournament just getting wrapped up, we were only able to have 2 practices before our first tourney.

This past weekend we went to Homer, Michigan for the 5th annual Homer Festival Baseball tournament. On Friday Night we had a very tough draw for our first game together. We played Baw Beese in the late game. For the first 5 inning we hit the ball hard, but mostly right at them. They were a very good team and hit very well themselves, except they were finding the holes and the gaps.

It was 12-4 going into the bottom of the last inning. We also started the last inning, three minutes before the time limit on the game expired. Eleven batters hit in the bottom of the 6th. It started with a triple and ended with the same kid hitting a grand slam to win the game. There was a whole lot of excitement between as well as 8 of the 9 runs were scored with 2 outs. Final score was 13-12 We knew at that point we were going to have a special team when these boys got used to playing together.

Saturday morning was again a tough draw. We played Homer. They were playing their 61st game together as a team for the summer. We played well, but just couldn’t overcome some early mistakes and lost 13-3. This loss set us as the #2 seed in the single elimination tourney. We would have to play the #3 seed Baw Beese team again.
This game started like the same as the 1st time we played them. They jumped all over us early, and we clawed back into it by the 3rd inning and shut them out thru the final 3 innings. Winning 8-4 to send us into the championship game against the Homer squad again.

We started out strong against Homer with 4 runs in the top of the first. They came back with 2 in the bottom of the frame. Then we had one bad inning in the second, giving up 6 in the frame. This was too much to overcome although the boys never quit. We ended up losing 13-9.

It was a great weekend of baseball with more to come. We headed to Jackson, Michigan for a tournament this weekend and finished up with a couple more into mid-September. The team would like to thank all of our sponsors for their help in making this possible.