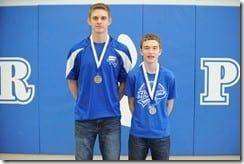 The heavily favored and most well established Fairview Apaches’ team came away with first place in the event, but not without having to escape the Montpelier Locomotives who placed a close second. Fairview racked up a team score of 3,268, leaving them a scant 38 points better than Montpelier’s 3,230.

On the girls’ side, Gabby Stuckey won the individual first place gold medal for Stryker with 285 points. Lita Banks of Montpelier finished fifth overall individually with a score of 280.

Five teams vied for the top spot in the junior high ranks, with Montpelier again placing second with 2,965 points, and Stryker taking third with 2,785.

Weston Dick of Montpelier placed first overall in the junior high boys’ individual ranks with a 280 score, with Chris Moor finishing fourth at 273, and Logan Dick placing sixth with 270.

In the junior high girls’ ranks it was Arie Merillat making it a clean sweep of the first place individual gold for Montpelier with a score of 273. Ashley Caudill of Montpelier finished second with 262, and Caitlyn Lyons of Stryker finished in fifth with 252 points.