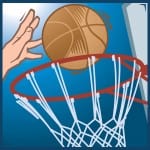 PIONEER – It almost seemed as though nobody wanted to wrinkle the nets during the first eight minutes of the BBC tiff between North Central and Hilltop on February 1. Eventually both offenses regained consciousness and upped their output, the Eagles more so as they held off the Cadets by a 50-43 score.

After a 6-5 sleepwalk through the first period, the Eagles upped their advantage with an 11-point second. The Cadets refused to go away though, and only trailed by three at the intermission. It was not until a 19-15 run in the fourth that the Eagles were able to get breathing room over their defiant BBC rivals.

Jalen Dancer led all scorers with 19 points for the Eagles, with Cam Cochran putting in 12, including a three-point buzzer beater just prior to the half. Josh Taylor hammered down 7 points, with Clayton Ferguson adding 5 points, Brandon Geiser 3, and Branden Turner and Dylan Hutchison each getting 2 points.

Erik Stipe threw down 14 points to lead the Cadet Cadre, while Brandon Willis and Payne Sentle each had 10 points. Joey Mohr and Jalen Towers had 4 points apiece, and Kayne Grime rattled in a free throw.