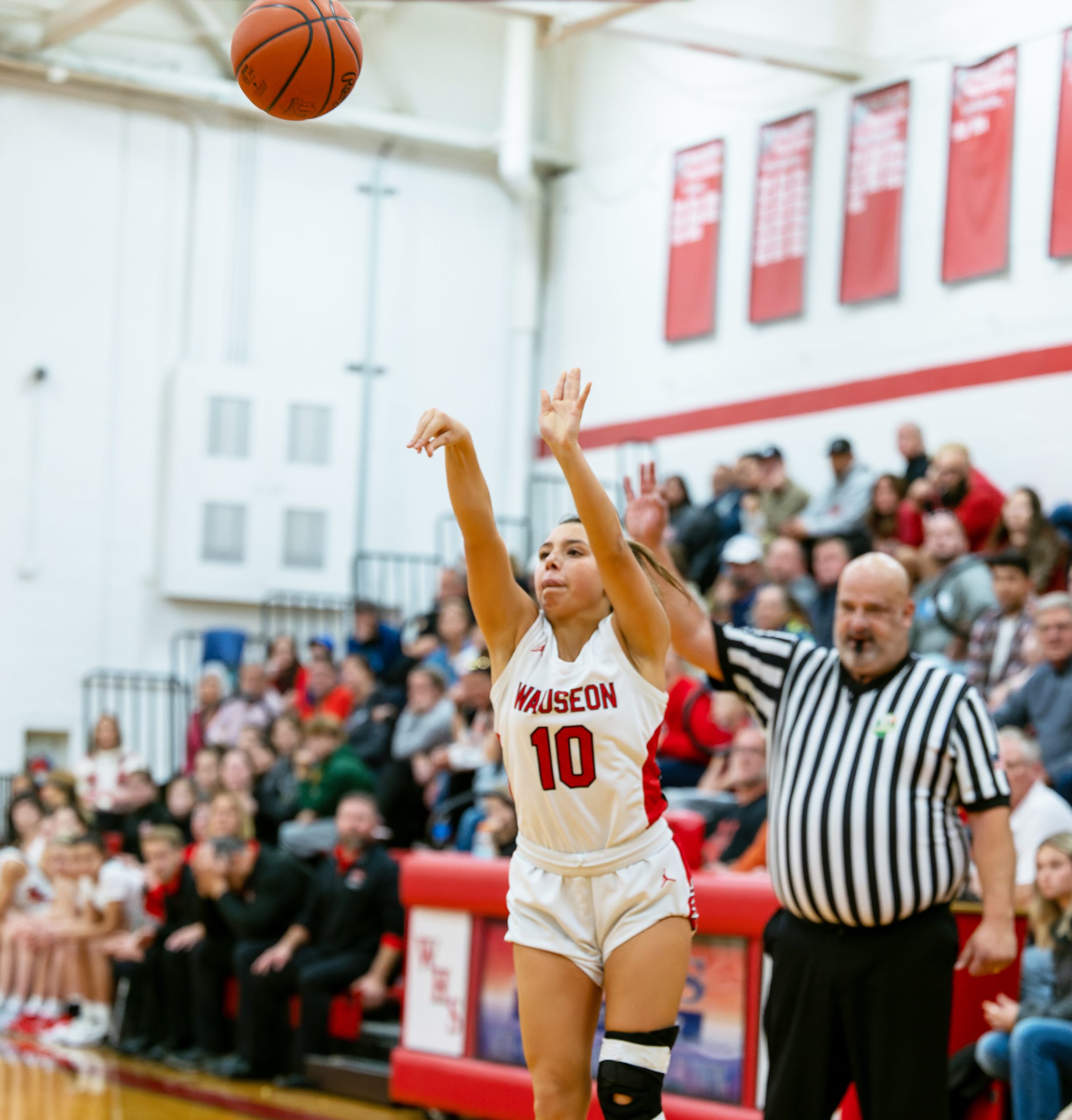 LONG BALL … Wauseon freshman Aizlynn Coronado knocks down a three-pointer in the first half. (PHOTO BY JACOB KESSLER, STAFF)

WAUSEON – The Indians overcame foul trouble and a rash of turnovers to pull out a 34-29 win over Archbold in their non-league meeting on Friday night.

Archbold started strong as they jumped out to a 7-2 lead before Wauseon’s Hayley Meyer scored the last six points of the quarter to give Wauseon an 8-7 lead.

The Indians continued their run to open the second with a bucket from Maite Marugan and two free throws by Kaylin Ersham to push the lead to 12-7.

A field goal by Makena Thiel for the Bluestreaks stopped the 10-0 run by Wauseon before Aizlynn Coronado drilled a three-pointer to give the Indians a 16-9 lead.

Foul trouble began to mount for Wauseon toward the end of the first half as Meyer would be saddled with her third foul with 1:28 left in the half.

Archbold (2-1) took advantage as they closed the deficit to 16-15 but Makenzie Stasa would get a conventional three-point play after an offensive rebound to put the lead for Wauseon at 19-16 at halftime.

Wauseon went on a 6-2 spurt to start the second half led by four points from Meyer to increase the lead to 25-18.

Despite increasing their lead, the foul trouble continued for Wauseon as three starters had three fouls each with 5:04 left in the third.

Archbold responded with a 5-1 run to close the quarter behind four points from Sophie Rupp to trim the Wauseon (1-1) lead back to three at 26-23 entering the fourth.

It was another scoring surge by Wauseon to begin the fourth quarter with Meyer scoring twice followed by field goals from Stasa and Marugan to give Wauseon their largest lead of the night 34-25.

That ended the scoring on the night for the Indians as Meyer would foul out with 4:07 left in the game and Marugan drew her fifth at the 3:12 mark.

Down the stretch, Rupp hit a shot for Archbold, and Carly Grime was 2/2 at the foul line to bring the Bluestreaks to within five at 34-29.

Archbold was unable to draw any closer as they were unable to get any shots to fall to end the quarter just 2/9 from the field and finished the game shooting 11/45 (24%).

“It’s hard to win games making the amount of mistakes we made and getting out rebounded (32-12, Wauseon) like we did”, said Archbold head coach Brian Zeigler following the game.

“Give Wauseon credit, their execution was better than ours”.