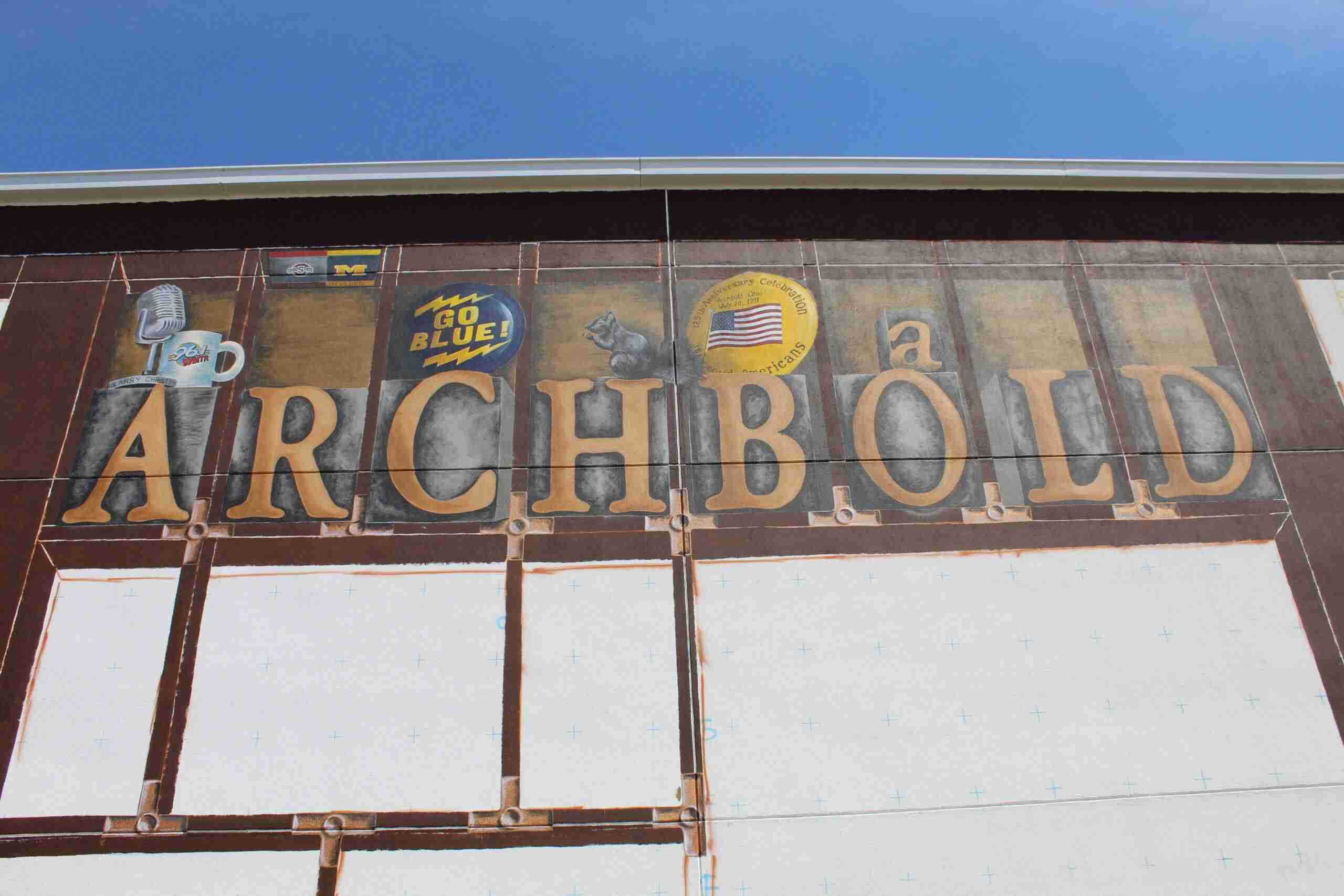 TRULY ARCHBOLD … In the center of the mural and at the top reads Archbold in big bold letters. It is a true wow moment with its size and lets you know where the history is from. (PHOTO BY JACOB KESSLER, STAFF)

If you have been down Stryker Street in Archbold since June 1st you may have noticed a change of scenery. That change of scenery is on the south side of the Rupp Furniture and Carpet Co. building. Each day as people pass by there are more and more changes to be seen.

Dave Rickerd of Rickerd-Art has been painting a mural that encompasses everything Archbold onto the entire side of the building. Dave, who is a Deshler native, has been working in graphic design for more than 30 years and has been traveling around the tri-state area painting murals full time for 5 years.

This mural is the biggest he has done since he started, and it and that is even more exciting. “I just love it, it’s not a job for me. I love to paint!” said Dave. With his background in graphic design, Dave also worked with the village council to design the mural.

“They gave me a list of things that they wanted me to put on there, I would do my research and we would work on it to pick which ones we thought fit the best,” Dave explained.

The Mayor of Archbold Brad Grime explained that this process of working together took around 8 months and created around 13 different variations before they were able to settle on the perfect design.

The mural will include many different things that all have to do with the history of Archbold both then and now. Such things include Northwest State Community College, Sauder Village, the Archbold Blue Streaks, the Police and Fire Departments, 96.1 WMTR, the Archbold Water Tower and many other pieces of Archbold History.

It was designed to be a case box style which looks somewhat like how an older style printing press looked with each letter being placed into a spot to be pressed onto the paper. Mayor Grime said “Each box has its own story”.

There will be a QR code on each one so that each person can scan it and see the story for each one.” A platform will also be built next to the police car and attached to the mural.

This platform will allow people to take a photo with the mural and the section behind them will make it look like they are in the mural. “When you stand here and look at it, it’s even more impressive. I wear this shirt that says Wow! because that’s what I want them to say.”

“The whole reason I’m making murals is for people to have a wow moment!” Dave said. The mural is looking to be complete sometime between the end of June to mid-July.

If you are out and about stop on by and watch Dave as he continues to paint this new piece of Archbold history. Dave Rickerd and Mayor Grime would like to thank Black Swamp for donating the lift for the mural and the Community of Archbold.