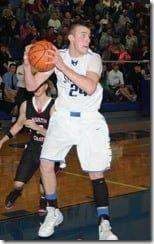 The office of BBC Commissioner Randy Bachman has announced that Parker Ruffer of Stryker is the 2013-14 BBC Boys’ Basketball Player of the Year.

Anybody stunned by that announcement please signify by raising your hand. Uh huh, pretty much what I expected…nobody.

It is not that often that you find a big guy who is a throwback to the center play of Bill Laimbeer. Ruffer knows that when the shot goes up, he is the man that needs to clear the lane for a rebound. He also knows all points of low-post play, both offensively and defensively. What makes him a Laimbeer-type player is that while the ball is being brought down court and his defender is turning around in the paint to await his arrival, Ruffer will get the ball outside of the arch and rain down threes over guards who can only defend his armpits. The Big Panther didn’t rake in over 400 points last season by asking nicely; he dominated…plain and simple.