Pike-Delta-York Board Of Education: Board Members Recognize Students Of The Month 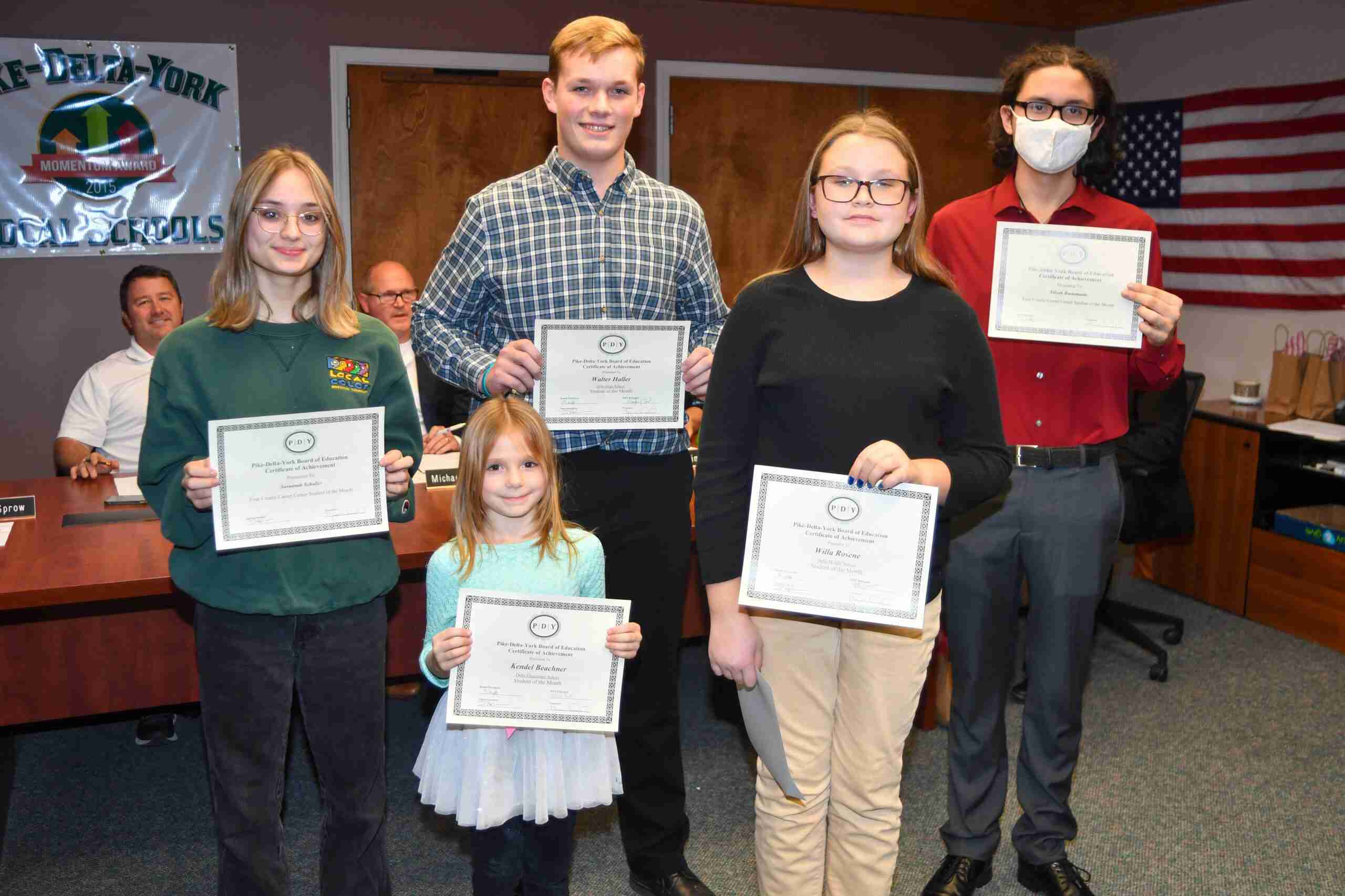 STUDENTS OF THE MONTH … Delta’s students of the month hold their certificates during the Delta School Board Meeting on December 15th. Names are given left to right. Savannah Schaller, Kendel Beachner, Walter Hallet, Willa Rosene, and Elixah Bustamante. (PHOTO BY JACOB KESSLER, STAFF)

The Pike-Delta-York Board of Education held their meeting on Wednesday, December 15th. The meeting was called to order at 6:30 p.m. followed by the Pledge of Allegiance.

The board first approved the minutes from the previous meeting that took place on November 17th followed by the reading of correspondence.

Superintendent Ted Haselman informed the board that letters had been received from the marching band as a thank you for the equipment that is being purchased to help them out.

The settlement agreement between the district and the village was signed and received along with the check from the village. The board then proceeded to give out their students of the month award. Recipients of the award are chosen by the building’s principal and staff.

The board then recognized board president Mike Mattin and board member Mike Ford. These members were recognized for their years of service to the district with each also receiving a plaque.

The board then asked if any members of the public who were present had anything to add to the proposed school calendars for the 2022-2023 school year. With no comments being made, the two possible school calendars will be passed on for more input. The treasurer’s report was then given and included the monthly financial report.

The state has not yet made the adjustment in the school funding formula. As a result, the school is still receiving the same amount of money as it did in July. Currently, the estimated time the state is saying it will take to fix is in January.

The school is owed around $300,000 in government ESSER money. That money will still be coming but has not yet been appropriated. Audits are now also being conducted and are going well. A motion was made to approve the treasurers report which was approved.

Superintendent Haselman then gave his report and informed council that post cards were being mailed out to PDYS residents in the district thanking them and reminding them to refill out their tax paperwork with their employer, so it reflects the one percent tax increase.

Personnel recommendations were then given to the board and the high school guidance handbook for 2022-2023 was discussed and approved.

The recommendation was then made to purchase 31 android IFP 75-inch display units for the elementary school at a cost of $85,062.96.

The recommendation was made as part of the projector replacement program. It was also recommended to allow 6th grade students to go on an overnight class trip to camp Michindoh.

The cost of the camp is $145 per student with funds being raised through read-a-thons and the DMS annual schoolwide fundraiser. Students will be chaperoned by the 6th grade staff and high school counselors.

High school three-hour delay dates were then proposed for state end of course assessments. A memorandum of understanding was then recommended to initiate a donation of personal days and or sick days to an employee who has been faced with a catastrophic life event. The board then moved to approve the superintendent’s report.

The 2022 organizational meeting was then discussed. It was decided to hold the meeting on January 5th at 6:00 p.m. followed by a special meeting at 6:30 p.m.

Alice Simon was then elected as the Board President Pro Tem. The resignations of board president Mike Mattin and board member Mike Ford were then accepted. The open positions will be available and posted on social media, with press partners and other means.

Report of the buildings were then given to board members from district principals followed by items from board members.

Board members Alice Simon and Tammy Sprow shared they’re thanks to Mike Mattin and Mike Ford for all the work that they have done for the district over the years.

Both Dr. Mattin and Mr. Ford expressed their appreciation to their fellow board members and the happiness that they have experienced over the years.

With no executive session being needed, the board moved to adjourn at 7:34 p.m.