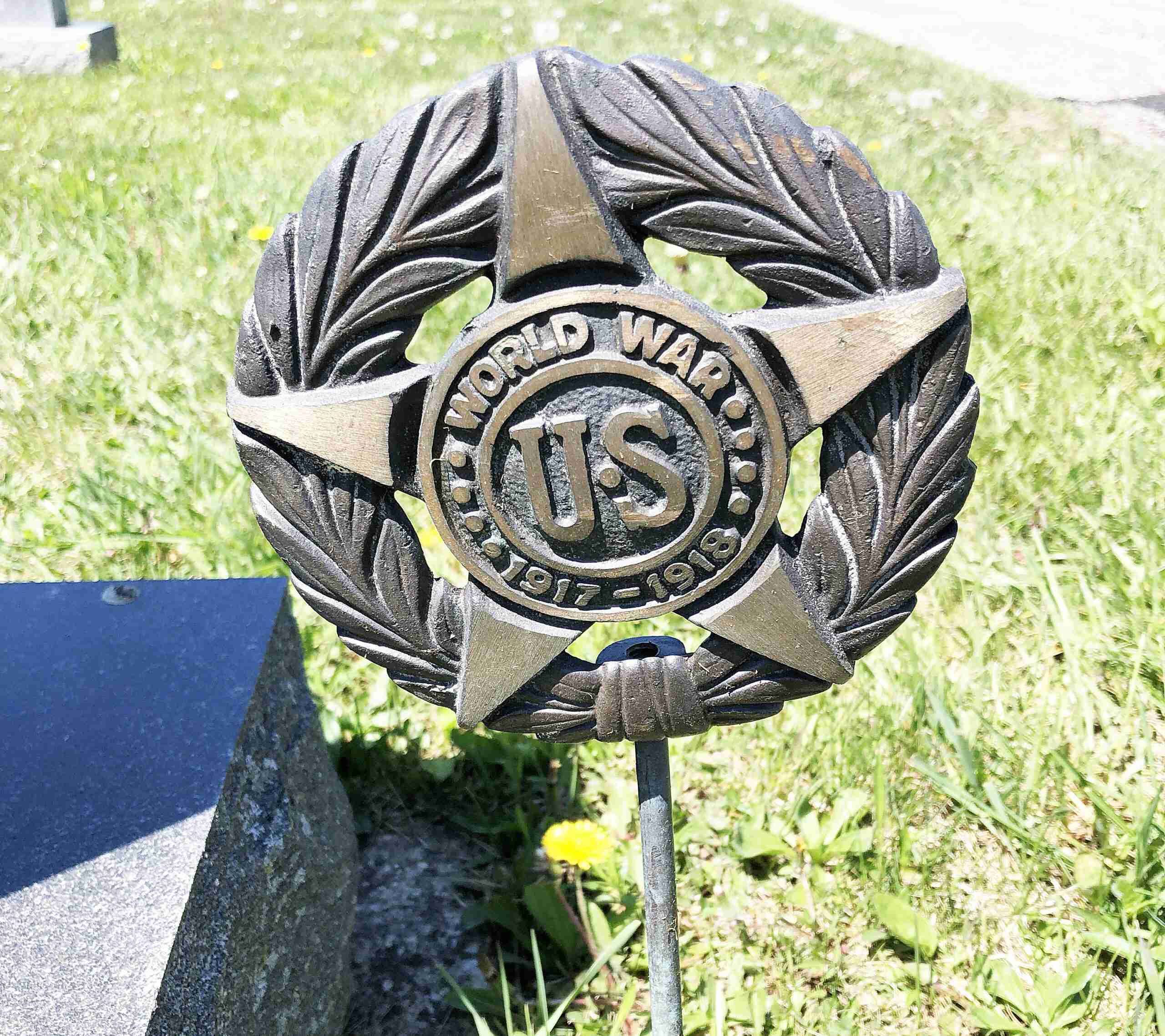 BRASS MARKER … This marker which is a World War I, 1917-1918 marker is placed next to a grave in the Stryker Cemetery where there are many others. Join in and become part of a large team who ensures that none of the Williams County veterans are lost to history and all are recorded for posterity. (REBECCA MILLER, STAFF)

A wonderful thing is happening to help maintain the memory of Williams County Ohio veterans. Brian Fritsch, who is the Ditch Engineer for Williams County, is also part of the GIS department, Geographical Information Systems (or Science).

Fritsch feels it is important to save the information concerning the men and women who have fought for our country and are buried or remembered in the 57 cemeteries in the county.

He has organized a site online to which anyone can download a burial site with pictures of the Brass Marker and the Headstone for a soldier.

On storymaps.arcgis.com, Fritsch points out that “as time goes by, these locations become harder to find.

Gravestones begin to fade, deteriorate, and run the risk of becoming unreadable. We want to preserve the memory of these veterans by mapping their grave locations.”

The point of this project is to find out how many there are, if any have been missed, and to have a permanent record online. Some of the cemeteries have a paper map, but they may not have been kept up to date, or have gotten old and yellowed.

This website gives an opportunity for family members of veterans and anyone else, to supply other information about that person as well.

Once you send in the pictures of the marker and the headstone, you can email as much information as you know to Fritsch and he will enter it onto the website.

He is hoping families will send in information such as where the veteran served, a picture of them while they were in the service and where they are from.

Links can then be set up for people to do more study. For example, William J. Knight, from Stryker is buried there. He was a Medal of Honor recipient and that can be clicked on which then also offers a link to the 21st Ohio Voluntary Infantry.

It mentions The General, so that link can be followed. Links can be added as information is added.

Last summer a team from GIS went out and collected pictures of a few grave markers and tested the site to see how it would work. He found one at Riverside for a Master Sergeant Paul Zigler. On the headstone it says “in Memory of”.

“This is just one of the examples,” Fritsch said in an interview. “We hope that others will be as drawn to discovering the lives of these veterans also.”

Using the directions on the website, people create the point, email the info to Brian, and he will put it in.

He is hoping that even though someone may be doing it for a family member, that they will go ahead and collect others that they see. “We don’t want to lose any of them,” he said.

He encourages participants to go for a stroll in a Cemetery for the express purpose of spending some time collecting 6 or more and sending them in. If it has already been collected, the GPS will let you see it was already done.

This effort will be maintained by the County Engineering Dept. and the GIS Department over the coming years. They will be on the cloud and publicly available.

Along with the collection site online, he has created a dashboard, a secondary item that shows statistics. Veterans can be researched by branch of service and by the time of service.

There is also a bar graph that will show how many served in what era and what service.

To get to the website, either type in storymaps.arcgis.com or go via the link on the Williams County Engineering page.

Not only does this help us keep a record of our veterans, it offers a great opportunity for families and friends, alone or in groups, to spend some time together searching and recording info.

It is kind of like an Historical version of going on a Virtual Hide and Seek. Enjoy the challenge.