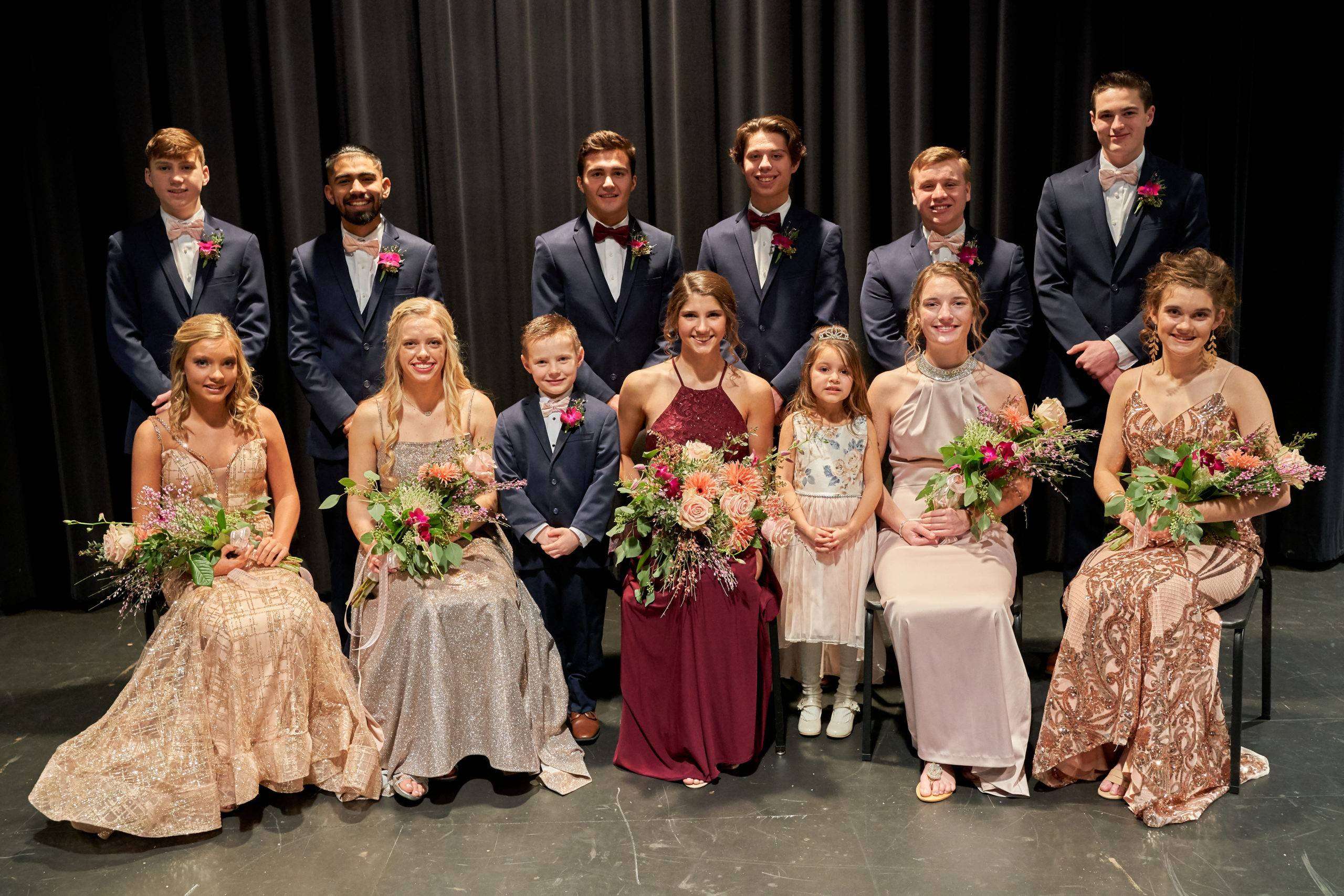 Homecoming Night in Pettisville saw the Hicksville Aces coming into Blackbird territory to tangle with the hometown boys. Presiding over the events was the Court of 2020 Homecoming Queen, Kelly Nicole Miller.

Queen Kelly is the daughter of Eric and Marla Miller, sister to Shelby and her husband Colton, and Elizabeth. She is involved in Noteworthy, Jazz Band, musical, academic quiz, cross-country, track, Bible quiz, Spanish Club, Student Council and the West Clinton MYF. In her free time, Kelly enjoys spending time with her friends and watching “Parks and Rec” at home. After high school, Kelly plans to attend Hesston College in Kansas, majoring in music education.

Kelly’s escorts for the evening were Mitchell James Aviña and Payne Aaron Reiniche. Mitchell is the son of Benny and Josie Aviña, and brother to Mikayla, Brady, and Jared. He is involved in soccer, basketball, and Noteworthy. In his free time, Mitchell enjoys hanging out with friends. After high school, Mitchell plans to attend Kent State, majoring in Pre-Dentistry.

Payne is the son of Steve and Nikki Reiniche, and brother to Aubri and Logan. He is involved in basketball and FFA. In his free time, Payne enjoys working at Super Value and hanging out with friends. After high school, Payne plans to attend Northwest State Community College and major in Criminal Justice.

Freshman Attendant Paris Nicole Coopshaw is the daughter of Becky Rhodes and Tim Coopshaw. She has two brothers, Brett and Brandon. Paris is involved in FCCLA, Glass City Volleyball Club, and Tedrow Mennonite Youth Group. After graduation, Paris plans to go to college and play volleyball and travel to many places.

Paris’ escort for the evening was Sean Ephraim Adkins. Sean is the son of Seth and Angie Adkins, and brother to Sydnie, Shiloh, Arianna, Asher, and Annabelle. He is involved in basketball, track, soccer, and Noteworthy. After high school, he is planning to go to college and to work at a high paying job, then retire at the age of 40.

Clara Lynn Damman was selected as the Sophomore Attendant. She is the daughter of Andy and Bree Damman. Her siblings are Delana, Gabe, and Zeke. She is involved in cross-country, track, FFA, 4-H, and Band. After high school, Clara plans to go to University of Findlay to get a Bachelor’s degree in Animal Science Pre-Veterinary Medicine, and then get her Doctorate from The Ohio State University for Veterinary

Escorting Clara was Carson William Bennett, the son of Jon and Susan Bennett, and older brother to Kelsey and Jake. Carson is involved at Pettisville Missionary Church in the sound booth, youth group and Bible quiz. Carson plays soccer and is involved in Pettisville Eveready 4-H club, a leader in Fellowship of Christian Athletes, and an FFA officer. After high school, he is considering Northwest State and Cedarville University to become a mechanical engineer.

Ellie Deanne Wixom, the daughter of Leo and Jadea Wixom and sister to Madeleine and Caite was the Junior Attendant. Ellie is involved in cross-country, track, AEC youth group, FFA, FCCLA, FCA, and Noteworthy. After high school, Ellie plans to attend college, majoring in music production with a minor in ministry.

Heath Alan Waidelich, the son of Lee and Shawn Waidelich and younger brother to Clay and Brooke, was the Junior Escort. He is involved in Bible Quiz, Academic Quiz, soccer, track, MYF at West Clinton Mennonite Church, and NHS. After high school, Heath plans to attend college to become a biologist.

Felipe Chavez was named the Senior Escort. Felipe is the son of Heron and Nancy Chavez, brother to Nancy Guadalupe and Isabella, and uncle to the Homecoming Princess. Felipe is involved in FFA and plays soccer. After high school, Felipe plans to take a gap year and then go into a graphic design career.

Homecoming Princess Maya Spangler is the daughter of Andrew and Nancy Spangler, and the niece of Senior Escort, Felipe Chavez. Her favorite thing to do at school is to share what she has at home, because some of her toys are special. When she is not at school, she likes to go fishing with her grandpa and her mom. When she grows up she wants to be a scuba diver because she wants to pet whale sharks on the nose.

Homecoming Prince Benson Zimmerman is the son of Mike and Ashley Zimmerman, and big brother to Aubrey and Dalton. He likes to play football and play outside with his family. When he isn’t at school or playing outside, he likes to watch Transformers. When he grows up, he wants to be a firefighter because he wants to go in the fire.