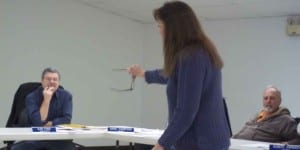 Rural Pioneer resident Annette Heller heatedly expressed her issues to the Pioneer Village Council at their meeting on Monday, March 18, 2013. Heller lives on County Road 15 in Madison Township east of the village, and since traffic from Reifel Industries has been re-routed to avoid sending semi trucks down Baubice Street and the North Central School building, she has seen an increase in traffic on her road. She believes that this move has endangered those who live on the road and who are out walking and biking, including children. Although she is not aware of any vehicles that are speeding, she feels that the posted speed exceeds conditions for the road. Her worry is that someone will eventually be struck and killed. She feels that the road is too small for the increased traffic. She did not see that it had been a problem before when trucks were permitted on Baubice Street, especially during the summer when children would not be in school. Mayor Ed Kidston said that half of Reifel’s traffic which had formerly used Baubice Street had been re-directed to County Road 15 because of safety concerns for students. Heller asked why a road had not been built to accommodate the semi-trucks, but Kidston noted that this would cost the village two million dollars, and that the town could not afford such a project. He noted that if there was a substantial increase in the number of industries moving to Pioneer, that may eventually be a consideration, but not at this time. Kidston advised her to petition the county commissioners if she desires a change in the speed limit, and that if she notices violations, she should direct her concerns to the county sheriff’s office.

Her next issue concerned use of land near the town’s lagoon where it is possible that a solar energy plant will be located in the future. She said that she asked to purchase the 10 acres between her house and the lagoon back from the town for use by her farm, but was denied. The land had previously been owned by her mother, who she said had been forced to sell the land. Kidston said that he did not believe that she had been forced to sell, and but that she had been compensated financially for the acreage. He said he would review any documents that Heller could provide stating otherwise. Heller also said that village trucks hauling construction waste from the village were not covered with tarp and garbage was spilling onto her land, including chunks of concrete. Mayor Kidston confirmed that the town did indeed have a tarp law, and this issue would be addressed. She was advised to call the village if she observed materials falling off the trucks. Heller then said that formerly weight limits were posted at a culvert, but that sign is now gone. Kidston assured her that they had consulted with county engineers and they had determined that the road was large enough to handle the traffic, but that he didn’t just “carte blanche start sending trucks down there.”

Heller again emphasized that “it would be to Pioneer’s advantage to build a road for industry,” to which Kidston agreed, but the cost was presently prohibitive. She then threatened to send farmers with farm equipment through town and after school was out for the summer as it was “a more convenient route.” The village allows farmers to go through town as they want to be “good neighbors.”

After Ms. Heller’s address, the village proceeded to regular council business. Administrator Al Fiser said that village crews have done inside work repairing equipment when the weather was bad. He would like to consider blacktopping village streets which are in need of repair, and distributed a map highlighting the streets which need blacktop. He asked for permission to get estimates. Among those streets, Elm Street between Church and Mill Street was a priority; Mulberry Street to Lincoln Street, and four cul-de-sacs. The project would require about 51 tons of blacktop at a cost of $85,000. Council member Richard Schmucker asked why all of Mulberry Street was not being blacktopped, and it was noted that would cost the village an additional $15,000.

Kidston said that work would begin to replace a water line that runs along State Street, along a portion of Mulberry and to the area of the barber shop and antique shop on Baubice Street. He noted that on State Route 15 in town, there had been fiver or six water main breaks, and that it they needed to be replaced. Fiser said that he felt that the State Street line was pretty bad. Work may be done in two or three phases, and estimates had been calculated for three different phases of work and for materials. The current 6” line will be replaced with an 8” line. It has been expensive to continuing to repair the line and when breaks occur on State Route 15 within the village, police must be on hand to direct traffic as well. Council voted to allow Fiser to accept estimates and bids and secure a contract for the project.

Council will be seeking CDBG funding for a proposed parking lot on the northeast corner of Church and Elm Streets. The American Legion is collecting funds for the project, and council is hoping that the hoped for CDBG funds will pay for at least half.

Administrator Fiser noted that council had previously approved up to $35,000 to be used toward repair and maintenance of electric substations. Power Services of Centerville, Ohio, gave the lowest bid of $17,700. Other bids of up to $34,955 had been received, but Power Services will do the work, which is expected to begin in April or May, depending on the weather.

Kidston said that there had been a change in strategy for the storm sewer project that will go south through Thorp’s Addition to State Route 20. The cost of the project is estimated at $700,000, and the village was going to take out a zero interest loan. If they wait another year, the village could possibly be eligible for a $50,000 grant to use toward the project, and it would not count against them in point scoring. He suggested that it would benefit the town to wait until next year to begin the project.

Council noted that the cemetery clean-up will occur between April 15 and May 7. After that date, new decorations can be set out.

Mayor Kidston said that there would be a “slimmed down” Pioneer Days this year. The committee who brought the town the Clearfork Festival and dissolved, and there were no volunteers stepping up to take their place. The town still plans to have a parade, a chicken barbecue, and a couple bands. No date has been set.
Ordinance 02-2013, and ordinance to approve current replacement pages to the Pioneer codified ordinances and declaring an emergency was approved. Council voted to suspend rules so that the ordinance could go into effect immediately.

Council also passed Resolution 01-2013, a resolution strongly opposing the passage of House Bill (HB) 5 by the Ohio General Assembly which proposes uniformity measures for municipal income tax in the form of unfunded mandates and a substantial loss of revenue, and declaring an emergency. This bill would mean that village clerks would no longer collect income tax. Instead, the state would do so and issue refunds. Municipalities have concerns that they would not do so, and that this Bill would take away too much local control. Villages and cities across the state of Ohio have passed resolutions opposing HB 5.

Council moved into executive session to discuss property acquisition. No action was taken after returning to open session, and the meeting was adjourned.
Pioneer Village Council meetings are held at the Pioneer Community Center on the second Monday of the month at 7:00 p.m. unless otherwise indicated.