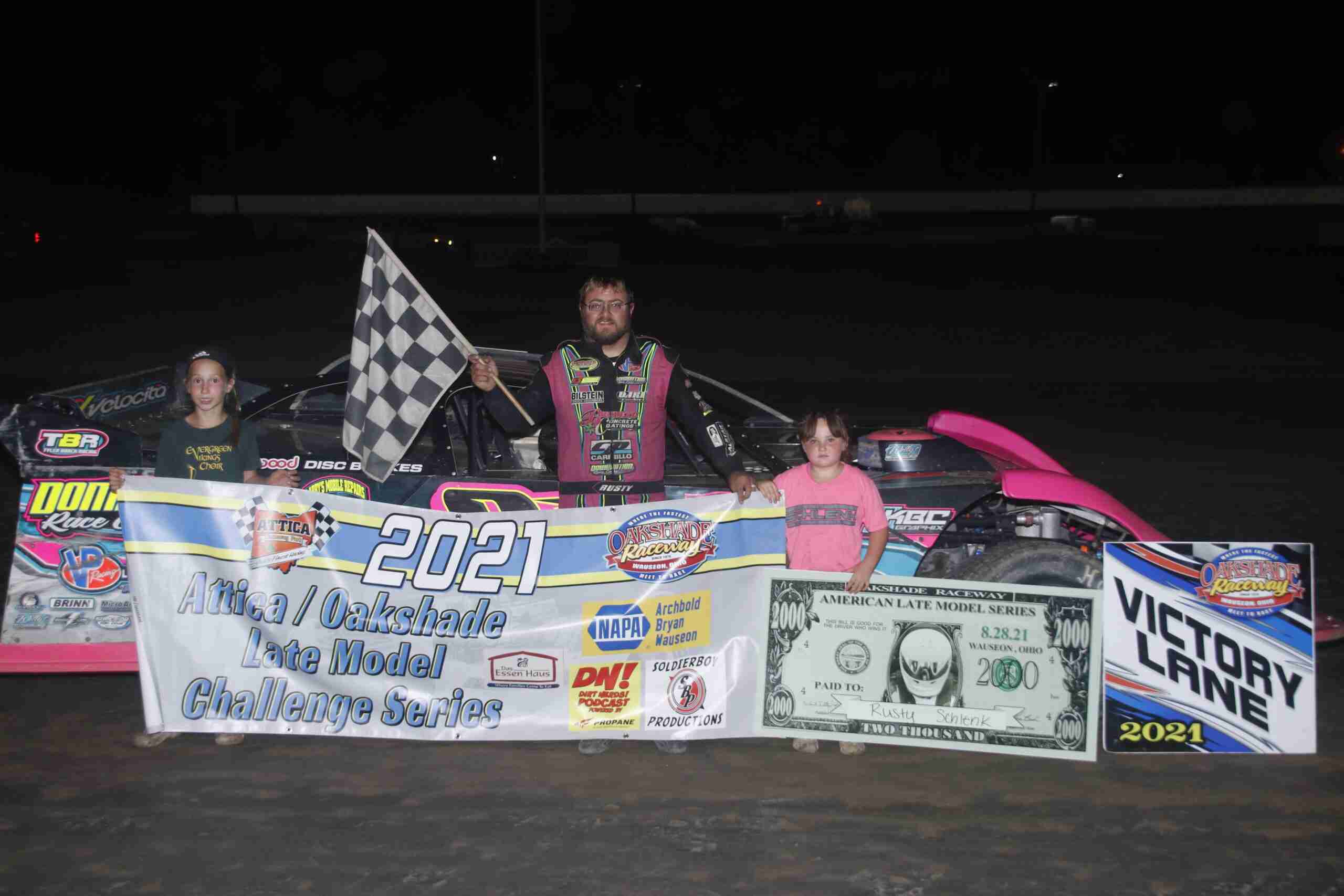 Colin Shipley spun and brought out the caution two forcing him to restart at the rear after running in the top five. Shiels would off Schlenk to lead the first handful of laps, but Schlenk had a great run coming off turn two and ducked under the #51 car to take the lead for good on lap six.

Casey Noonan suffered a devastating blow to his track championship hopes after cutting down a tire and spinning to bring out the yellow flag on lap eight.

Noonan was running in the top five at the time of the incident and was second in track points behind Shiels heading into next week’s season championship night.

Schlenk proceeded to pull away from the rest of the field the second half of the race. He opened a straightaway advantage over Shiels running in second.

Rusty Smith out of Sylvania, Ohio, started on the outside of the front row of a caution-filled UMP Sportsman 20-lap feature and drove to his seventh feature win of the season.

His win closes him to within 15 points behind Mike Jessen going into next week’s season championship. Jessen did not allow Smith to gain too many points with his second-place finish in the feature.

In the Bomber A Main, Kolin Schilt jumped out to the early lead from his outside front row starting position. Schilt would lead all the way until the white flag lap.

He pushed up going into turn two on the final lap and Jeff Foks Jr. drove by on the inside to take the lead coming to the checkered flag.

It was the fourth win of the season for the Holland, Ohio, driver and now he is just eight points out of the Bomber point lead. Schilt settled for second with Adam Lantz third. Bomber point-leader Gabe Mueller finished fourth with Scott Hammer was fifth.

The Compact A Main featured some exciting racing action at the front. Eric Carr, Joe Carr and Jason Deshler were battling three-wide for the lead late in the race.

Eric Carr was squeezed in the middle and ended up spinning into the infield tires in turn two which brought out the yellow flag.

That set up a one-lap dash to the finish with Joe Carr managing to fend off Deshler for the win. It was the Wauseon, Ohio, driver’s third feature win of the year. Joe Elliott finished third with Todd Drewes gaining 11 positions to finish fourth. Jeff Goodman ended up fifth.

The Bomber B Main was the final event of the night. Dylan Burt, out of Toledo, Ohio, wasted no time getting out front by the completion of lap one after starting sixth.

Burt went on to lead from flag to flag to win his second B Main of the year. Garry Domoe finished second with Dylan Herman climbing 10 spots to finish third. Chris Bleikamp and Ryan Clair were the rest of the top five finishers.