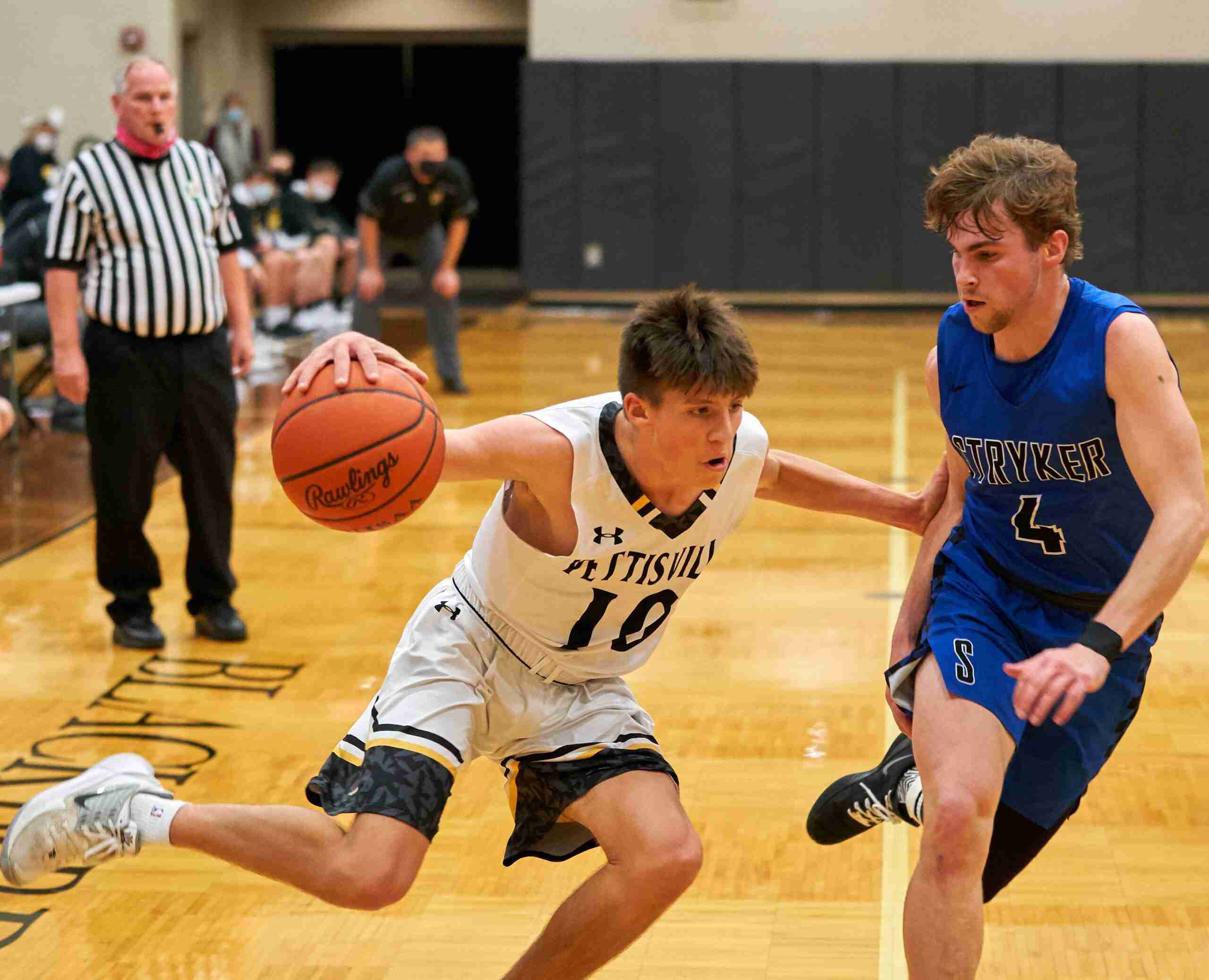 UNDER PRESSURE … Max Leppelmeier handles the ball in the first half with Stryker’s Kaleb Holsopple applying pressure. (PHOTO BY RICH HARDING, STAFF)

PETTISVILLE-Max Leppelmeier nailed a triple from the left corner with 1.5 seconds remaining to force overtime where the Blackbirds pulled away for the win.

Pettisville started the game fast by jumping to a 7-0 lead with 4:33 left in the first quarter, forcing a Stryker timeout.

The lead would grow to 14-6 before the Panthers put together a 7-0 run, capped off by a layup from Brandon Bowers to trim the lead to 14-13.  The Blackbirds bounced back with six unanswered points to take a 20-15 lead to the lockerroom.

Stryker quickly erased the halftime deficit with 6-0 spurt to start the third quarter to take a 21-20 lead.

After Pettisville took a 30-24 lead, the Panthers would close the third quarter on a 11-2 run aided by triples from Kaleb Holsopple and Jacob Cadwell to surge to a 35-32 lead entering the fourth quarter.

Pettisville would battle back with buckets from Leppelmeier, Cayden Jacoby, and Josh Horning to cut the Stryker advantage to 44-42.

The Stryker lead was 47-44 with 9.3 seconds to go before Leppelmeier, following a Pettisville timeout, would knock down a three-pointer from the corner to tie the score and force overtime.

The Blackbirds dominated the extra session starting with two field goals by Jacoby and Leppelmeier went 5/6 from the charity stripe to close out the win.

The Panthers struggled from the foul line down the stretch going 6/13 in the fourth and were 9/18 on the night.

Holsopple was the lone Panther in double digits with 15 points, 13 of those in the second half.

Be the first to comment on "SPOTLIGHT GAME: Pettisville Rallies To Take Down Stryker In Overtime 56-49"