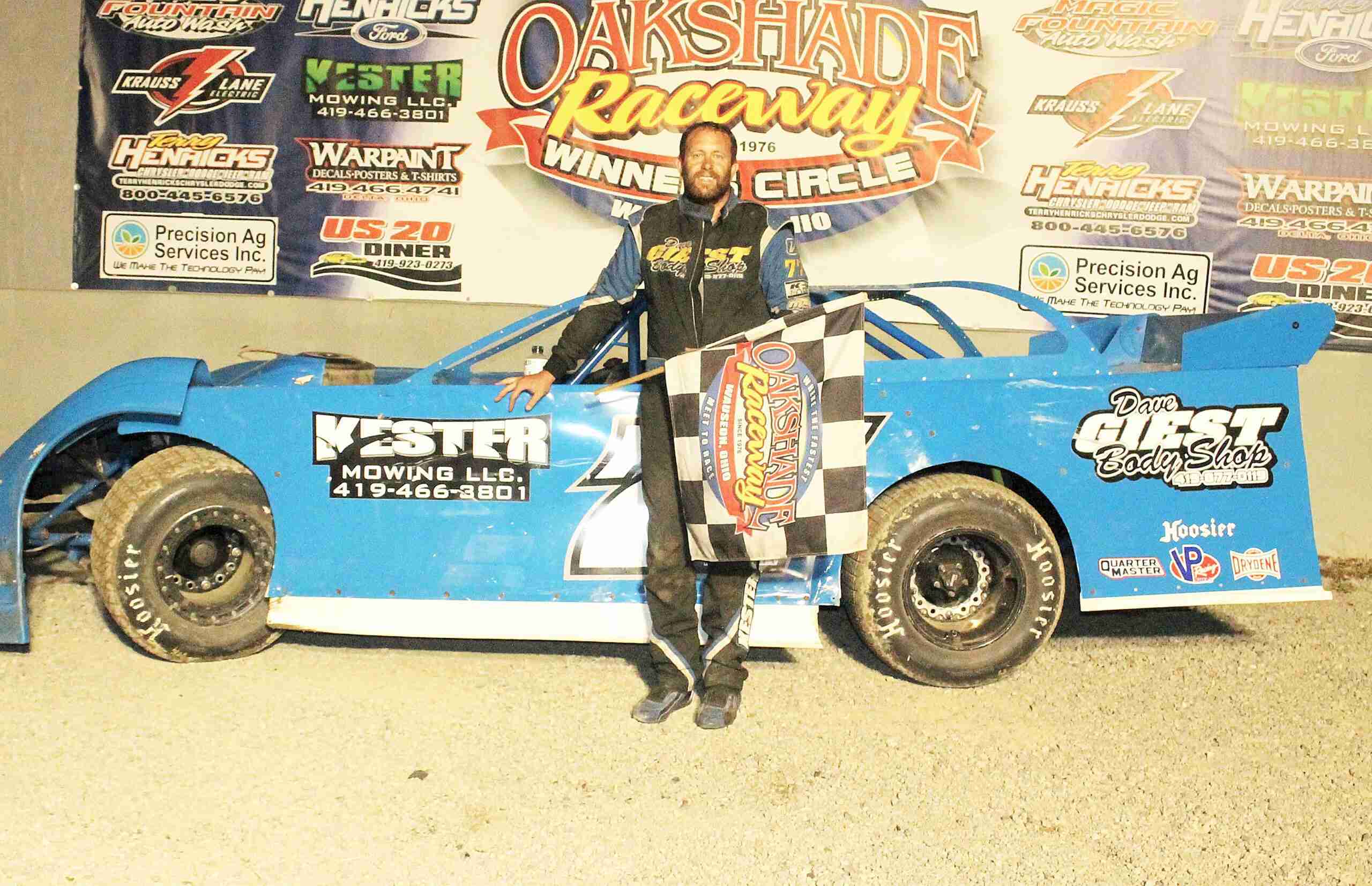 WAUSEON, OH – An exciting night of racing at Oakshade Raceway was highlighted by 2020 Oakshade Raceway Late Model Track Champion Steve Kester putting his car in the Oakshade Winner’s Circle for the first time this season after leading from flag to flag in the 25-lap late model feature and Haley Dippman winning the first ever Hot Dog Race sponsored by Nickloy’s Fix & Fab and Hammer Down Racing Report.

Just before intermission, Haley Dippman and Chris Bleikamp drove out to the front stretch to compete in the first ever Hot Dog Race at Oakshade Raceway.

Both drivers raced around the track for one lap with Bleikamp first to get back to the front stretch with Dippman close behind.

Dippman was a little faster exiting her car as both drivers approached the wall to consume their hot dog and soda. Things were even as they returned to their cars, but Dippman got her helmet on and buckled back in faster.

She took off to complete here second lap as Bleikamp appeared to struggle with his belts. Dippman came off turn four unchallenged and won the $100 courtesy of Nickloy’s Fix & Fab and an additional $84 that was donated by the night’s 50/50 winner.

After intermission, Steve Kester, out of Holland, Ohio, shot out to the lead of the Late Model feature event from his pole starting position.

A couple of early yellows, including one on lap two that involved nearly half of the field, kept the field tight for the first few laps.

After that, it was all green flag racing with Kester showing the way just ahead of an excellent battle for second between Casey Noonan and Devin Shiels.

Eventually Brian Ruhlman would dispose of both drivers and take over the second position with five laps remaining.

Despite dealing with lapped traffic, Kester was able to hang on and pick up the victory with Ruhlman settling for second.

Shiels ended up third with Casey Noonan finishing fourth and remaining the track point leader by 13 points over Shiels. Hillard Miller finished in the fifth position.

Murday started on the pole and drove out to a huge lead the first part of the race. A few cautions would tighten up the field, but Murday drove away after each restart and picked up his third win of the season.

Jake Gamber held off Mike Jessen to finish second. Jarrett Rendel and Scott Robertson were the rest of the top five finishers.

Justin Gamber and Kolin Schilt had a heck of a battle for the lead in the Dominator Super Stock A Main for pretty much the entire race.

Gamber, out of Wauseon, Ohio, started on the pole and took the lead over Schilt at the start and the two drivers drove away from the rest of the field.

Schilt had a close call near the finish of the race after trying to get by a couple lapped cars running side by side. Contact from one of those cars sent him sideways, but Schilt was able to gather it back in and continue on.

The yellow flag did come out for Haley Dippman who ended up spinning after the contact which set up a one-lap shootout to the finish which did not disappoint.

Schilt drove to the inside of Gamber for the race lead going into turn one after the restart. Schilt took the lead down the backstretch, but Gamber ducked back under Schilt going into turn three and muscled his way back to the lead at the finish line.

The Compact A Main was slowed with a late caution as well that would wipe out Eric Carr’s lead and set up another one-lap race to the finish with Ryan Okuley restarting in second.

Okuley tried to challenge Carr for the lead, but the Wauseon, Ohio, driver held him off to pick up his second consecutive A Main win and his third of the season.

Okuley settled for a second-place finish with Jason Bailey, Jason Deshler and Brett Ireland the rest of the top five finishers.

The red flag flew on the first lap of the Dominator Super Stock B Main after a crash on the backstretch involving Jeff Wells, John Lonabarger, Harriet Callahan, Duane Fletcher and Mason Luttrell.

That resulted in a complete restart that saw Herbie Haynes take command. Gregg DeTray began closing on Haynes and took the lead on lap five after Haynes slowed on the backstretch and retired to the infield.

DeTray, from Swanton, Ohio, then drove away and picked up the easy victory over Wesley Fisher, Duane Fletcher, Zeke McNew and Jason Drummond.

The Compact B Main wrapped up the night’s racing action with another exciting finish. Taj Mitchell started from the pole and led all but one lap. Aaron VanPelt pressured Mitchell for the lead, but then retired to the pits on lap five.

Mitchell got up high in turns one and two and appeared to drop off the pace a bit as Rushlow took the lead. Mitchell got back up to speed entering the final set of corners, but Rushlow would come out of turn for with the lead and the win.

Logan Streight was able to get by Mitchell on the final lap as well to finish second with Mitchell slipping back to third. Chris Rutan was fourth and Tyler Sandahl finished fifth.

The Vintage American Race Cars (VARC) will be making their annual visit to Oakshade Raceway on Saturday, July 9, with the cars on display behind the grandstands and a few exhibition races.