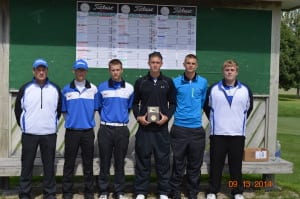 The Stryker Golf Team after their second place finish at the Delphos Invitational.

(September 13th, 2014)-DELPHOS: From the Delphos Country Club, the Buckeye Border Conference was well represented. Delphos High School hosted an Invitational at the Club on Saturday, with both Stryker and North Central in attendance. The Panthers returned to Stryker with a second place finish with a 333, while North Central had a respectable showing as well with a 376, good for seventh place.

Stryker was guided by the clubs of Tanner Clingaman, whose 78 placed him on the all tournament team for the event. Hayden Clingaman also performed admirably for the Panthers, firing an 81. Chad Ruffer put up an 81, while Cody Hall contributed an 87 to the Stryker total. Austin Frisbie added a 92.

The Eagles followed the lead of Jordan Reeves and his score of 86. David Pinc was but a single stroke behind his teammate, swinging his way to an 87. Fellow Eagle Brock Zuver finished the course in 94 strokes, while Allyson Hutchison shot a 109 for North Central.

Be the first to comment on "Stryker Takes Second, North Central Seventh At Delphos Invitational"