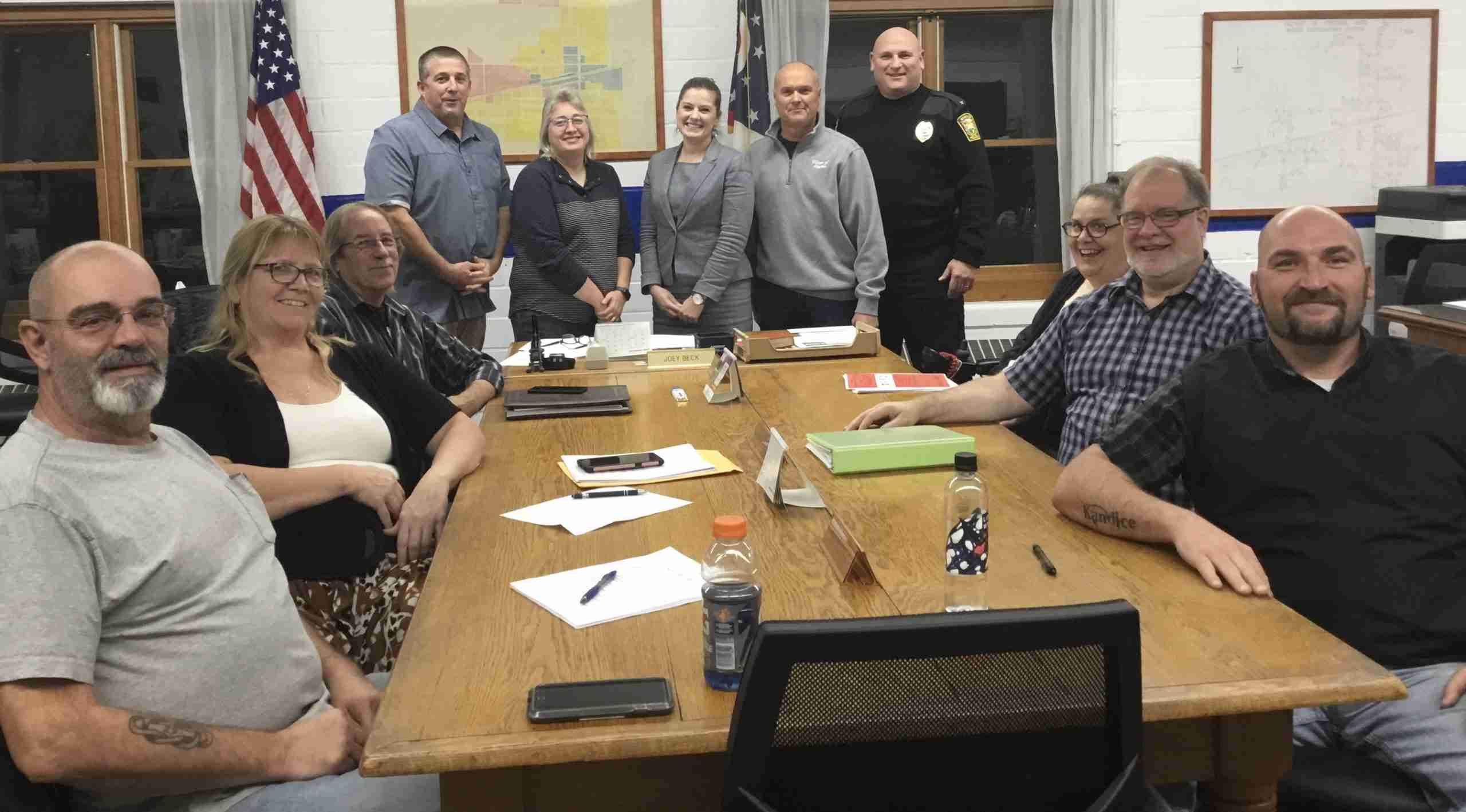 RESIGNATION ACCEPTED … Sadly, and with verbalized regret, Stryker Village Council accepted the resignation of Village Solicitor Katie Rakes at the November 15, 2021 Council meeting. Following the meeting they gathered for a picture, seated are Council members (left to right) Dave Benner, Vicki Cameron, President Lee Armstrong, Kim Feehan, Sean Ingram and Sam Farmer. Standing with Ms. Rakes in the center are Village Mayor Joe Beck and Fiscal Officer Beth Rediger on Katie’s right and Village Administrator Al Riegsecker and Police Chief Steve Schlosser on her left. All present expressed their regret in seeing her leave and Mayor Beck asked her to contact the village if she ever changes her mind. Ms. Rakes said that it has been an honor to serve Stryker Village but she needs to consolidate her time and feels that it will be good for Stryker to have a “fresh set of eyes.” (PHOTO BY REBECCA MILLER, STAFF)

The Decoration Contest is open to ALL Stryker School District residents who wish to participate. Entries must be called in to the Village Hall at 419-682-2191 and the property must be decorated by December 6th.

The Council members will drive around and look at all of the entries and votes will be cast by them at the December council meeting. The Annual Tree Lighting will be held on November 27 at 6:30 p.m. at the Village Hall, 200 N. Defiance St.

The Christmas Decorations on Main St., which were put up on November 16, will also be turned on that night. There will be Caroling and a short talk given at the Lighting and cookies and hot drinks will be served.

Mayor Joe Beck announced to Council that Katie Rakes had given a letter of resignation. No one wanted to accept it but said that they would, “with regret.”

Beck told her that she has “been a blessing to the village,” and Rakes said that “it has been an honor.” Council members all thanked her for her service to the village and said she will be missed.

The odd situation in which council finds themselves was also discussed, that being that none of the four members up for re-election remembered to get their names on the ballot in November for the election.

Mayor Beck said that with all that has happened over the past year, he did not remember to remind them and they did not remember either, so they find themselves in a position that is rather different.
All four, Vicki Cameron, Sam Farmer, Lee Armstrong and Dave Benner, need to submit a letter of interest if they want to retain their seat, along with anyone from the village who would like to join Council. The letters will be reviewed and it will be determined who will hold the seats. Those terms will begin on January 1, 2022.

Council also approved the Village Administrator taking care of the Health Insurance Renewal. In Legislation, they passed an emergency reading of Ordinance 2021-04 “an Ordinance repealing Ordinance 2020-08 Setting the Salaries and Fringe Benefits and defining certain duties of elected, appointed and hourly employees of the Village of Stryker.”

The remaining two members will be eligible for the increase to $1500 per year, payable monthly, in term beginning January 2024.” There are other sections in the ordinance concerning pay for each of the hired village employees and a number of other items.

In his report to council, Village Administrator Al Riegsecker spoke of the new sign which Mayor Beck had already mentioned earlier in the meeting.

It is up and running and announcements are being put there for all to see. There will be some dirt work and landscaping done around that in the future so Riegsecker said if there are any volunteers who would like to be in on that, it would be welcomed.

Leaf Pick-Up will continue through December 1, when the truck will be switched over to being a snow plow for the winter. The military banners were taken down the day after Veteran’s Day and he encouraged any residents who would like to have their family member included next year, to stop by the village office for an order form. ODOT has sent the Salt Contract renewal so they are set for that.

Fiscal Officer Beth Rediger thanked Emily Clemens and Al Riegsecker for their coverage of the office as she has been out for a family emergency. She will be working afternoons for a while.

Clemens said that she did not have anything to report except that she has appreciated Riegsecker covering the office when she needed to go out for other business. She was able to take her Pesticide Test and now has her Industrial Vegetation Spray License.

Chief Steve Schlosser reported that Officer Steven Graziani has completed his FTO is currently on the schedule. Officer Tyler Gorsuch has accepted a full time position with the Montpelier Police Department, however he is staying with Stryker PD as a part-time officer.

Once he completes his probationary period with Montpelier PD he will be eligible to work with Stryker again. Since the October 15, 2021 report, Stryker had fourteen traffic warnings, two citations and one adult arrest.

Council member Sean Ingram wished everyone a Happy Thanksgiving and Vicki Cameron mentioned that there are applications at the gas station for any families who might need a Thanksgiving meal.

A local resident is providing for up to ten families, for five people per meal. The next Council meeting is scheduled for December 13, 2021 at 6 p.m. to accommodate Christmas schedules.

The three winners of the Christmas Decoration Contest will be decided that night.