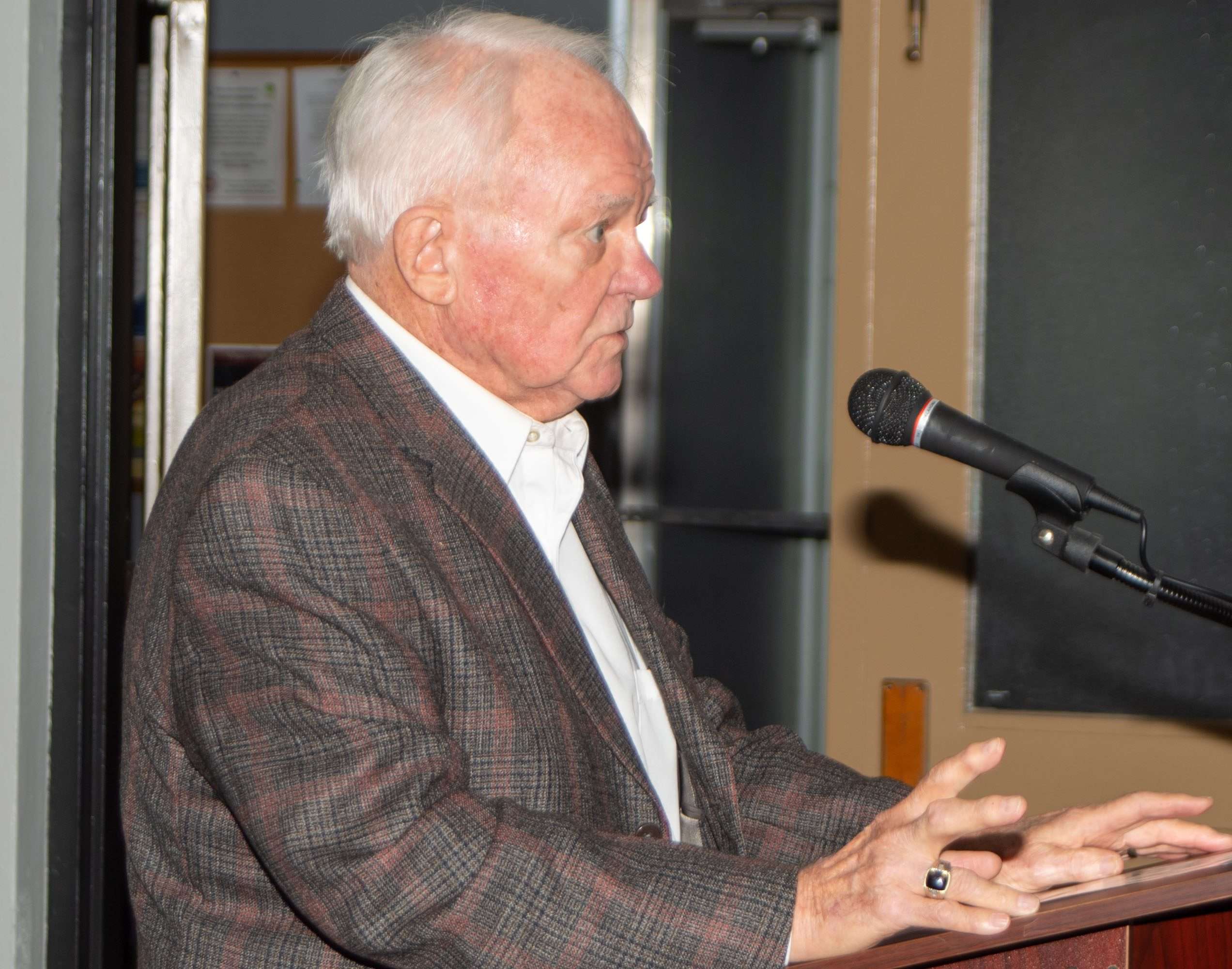 PARKING CONCERNS … Ned Bechtel addressed council regarding parking for his tenants. He stated that if parking is not restored, it will put him out of business. (PHOTO BY JACOB KESSLER, STAFF)

The Delta Village Council held their meeting on Monday, November 15th. The meeting was called to order at 5:30 p.m. followed by the Pledge of Allegiance and a Prayer given by Chuck Whitmire from Shiloh Church.

Council then moved to approve the minutes from the previous meeting that took place on November 1st. The opportunity was then given for any member of the public who wished to address council.

Mike Mattin, who is the President of the Pike-Delta-York School Board, came up to speak first. He proceeded to give a handout to each member of council before speaking. Mr. Mattin stated that he was there to speak about the pre-94 abatements.

The handouts showed everyone that has applied for Pre-94 abatement and the impacts that it is having on the school such as a $286,000 impact on the district.

He also explained that it costs $12,000 to educate one student per year. “38% of the funding for that comes from the local area and 62% comes from the state,” said Mr. Mattin.

He continued to state that the school is educating all of the students they have, but they are not getting their local funding. “Wauseon, they have the same thing. They hold the schools harmless. Archbold, same thing. Fayette, same thing. If they can do it, why can’t we?”

Ned Bechtel then spoke next regarding issues with parking. He stated that he has been in business for over 60 years.

Recently, there has been no parking added to the street where his tenants have used to park for 50 years. He continued to say that it is his belief that if parking is not restored, he will be put out of business. Notice has already been received from one of the tenants that a three-year lease will not be renewed.

The office space that is leased will also be hard to find a tenant for due to the parking issue Mr. Bechtel explained.

And without adequate parking, he believes that the property value will be decreased to the point where it may not be sellable. He also went on to speak about the issue that was brought up with parking on the street in the first place.

“I understand that since we drive in the United States, and not in Europe, we drive on the right side of the road. The steering wheel is to the left, so we all get out into traffic.”

“I’ve looked out that window for 50 years, that’s half a century, when I had my business there. I never saw somebody open the door and have an accident,” said Mr. Bechtel. He finished by asking council to reinstate the parking and telling them that it is putting him out of business.

Council then moved to hear a report from the Village Administrator. Currently, the village is looking into a way to fix up the tennis court. Mr. Peebles explained to council that a newer product called VersaCourt has been used in Lyons successfully to redo their basketball court.

VersaCourt also allowed for the introduction of a pickleball court at the basketball court due to the preprinted lines on the material. A representative will be coming up to look at the existing court and make recommendations and to give pricing.

Mr. Peebles also informed council that vandalism has been starting back up again in the parks. “We’ve had significant vandalism in the bathrooms again, specifically up around the parks and around the pools.”

“We thought we had a fence falling down around the old tennis court. Well, the fence isn’t falling down, the fence has been knocked down,” said Mr. Peebles.

All of the retainers to hold the fence up were stretched out and bent. “Someone is physically knocking the fence down,” continued Mr. Peebles.

The fence has since been reinstalled with additional supports. It was stated that security cameras will ultimately have to be considered and that installation costs will be looked at to hopefully put in around Spring.

Council then moved to approve invoices for the village. The Finance Director then informed council that the income tax collection was submitted, and it is currently showing a 10% increase over 2020 levels.

Council then moved to hear committee reports. A finance committee meeting was previously held with the topic discussing wage increases for the police department. A request was made for everyone to look over the information.

The Village Administrator was then asked to address Mr. Bechtel’s parking concerns. Mr. Peebles stated that he stands by the decision citing safety over access.

The question was raised regarding if the village could cut out the curb and add parking in there, to which Mr. Peebles replied that it is an option.

Moving to old business, a Third Reading for Ordinance 21-13 was discussed. The ordinance is in regard to appropriations for the Village of Delta, Ohio for the year 2022 and it was passed.

Next, council heard the Third Reading for Ordinance 21-16 regarding the approval and authorization for the administration to enter into an agreement with Pike-Delta-York Schools. The ordinance was passed before moving on to the final ordinance.

Ordinance 21-17 Second Reading is in regard to the establishing of salaries and wages for employees of the Village of Delta. Ordinance 21-17 was approved as well.

With no further business to attend to, it was stated that the next meeting will take place on December 6th at 5:30 p.m. A motion to adjourn was then made and approved by council.