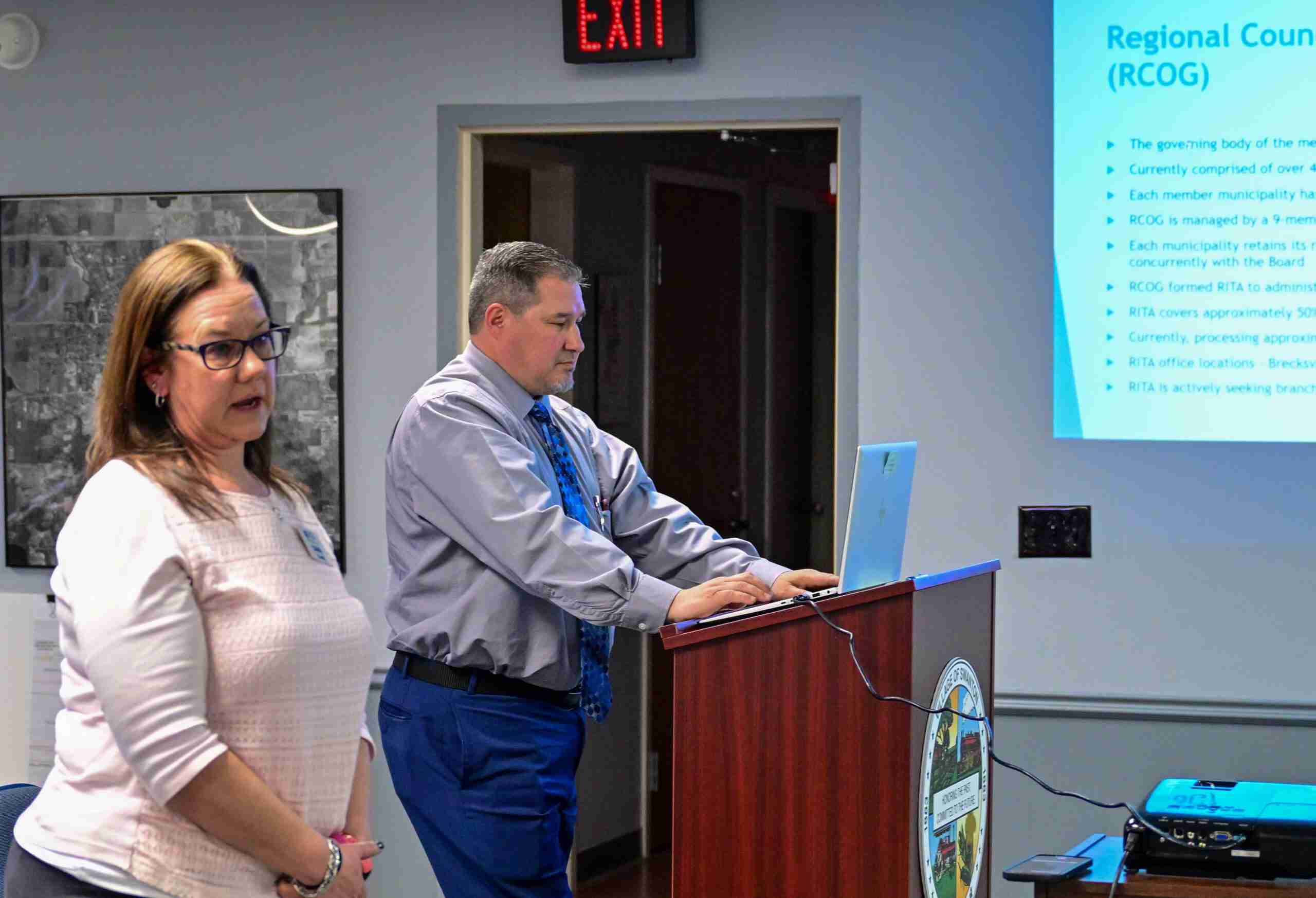 REPS FROM RITA … RITA representatives Brian Thunberg and Dawn Kuznik meet with the Swanton Village Council to show them a presentation regarding who RITA is and how the previous year went for the company and the Village. (PHOTO BY JACOB KESSLER, STAFF)

The Swanton Village Council held their meeting on Monday, March 14th. The meeting was called to order at 7:02 p.m. followed by a prayer and the Pledge of Allegiance.

Council first moved to approve the agenda. An updated live stream policy had not yet been received from the Solicitor. As such, the item was struck from the agenda before it was approved.

The minutes for the previous meeting that took place on February 28th were approved before council moved to hear committee reports.

For Water and Sewer, the bundling of projects together to save time and money was discussed. The road situation on South Main Street was also discussed with it being stated that patch work will be done.

In finance, a conversation took place regarding a tree that was removed on 109 Parkside. The tree was hazardous and needed to come down.

Currently, the owner of the property must pay double the cost of the removal in order to pay for additional costs.

It was stated that the mayor and other council members would like to change this to a 10% additional cost which should be sufficient to pay for costs incurred by the village to take down the trees in the future. A motion was made to make the change for tree removal costs which passed.

Next, representatives from RITA (Regional Income Tax Agency) gave a presentation to council. RITA is an income tax agency that provides services to municipalities in the State of Ohio that includes the collection of income tax.

RITA’s website also allows residents in those municipalities to file their local taxes online via their website or by mail. Representatives Brian Thunberg and Dawn Kuznik spoke to council to give them an update for how the previous year went for their company and the Village of Swanton.

It was also stated that the company is looking to put a satellite office in Northwest Ohio. It has been considered for several years, and it is being discussed more.

There is no thought as of yet to where the site would go however. Council members were also informed that RITA works to collect taxes from the beginning when residents file or do not file, and down the line to possible litigation.

Numbers were also given to council which showed that around 50% of residents and businesses in Swanton currently use RITA’s website to efile their taxes with the village.

Following the presentation from RITA, council moved to approve the following resolution and ordinances. The Third Reading for an Ordinance declaring the necessity to assess all properties in the Village of Swanton, pursuant to the Ohio Revised Code section 727.01. Et seq. for the cost of leaf collection, approving plans, establishing tentative assignments, and methods of payment.

The Third Reading for an Ordinance declaring the necessity to assess all properties in the Village of Swanton, pursuant to the Ohio Revised Code section 727.01. Et seq. for the cost of street lighting, approving plans, establishing tentative assessments, and methods of payment.

An Emergency Resolution confirming the appointment of M. Jason Vasko as the Fiscal Officer for the Village of Swanton.

The Mayors Report came next with it being stated that he had attended a meeting with small business owners and that discussions took place regarding events throughout the community.

The American Legion also spoke with mayor Toeppe regarding the Corn Festival. They will be holding a ride that, previously was going to take place on the same day as the festival, but has been moved in order to participate in the festival. The Village is also looking for a new potential location to hold the towns fireworks.

Next in the Administrators report, Administrator Hoelzle stated that she wanted to publicly thank everyone for their patience during the transition of not having a solicitor or finance director.

She continued with her report by informing council that ODOT has not yet updated the enter or exit signs yet. This update will be taking place, but it is important to note that if there are any signs on these posts, they will be removed by ODOT.

The signs are serviced by ODOT and they will not be putting the signs back up. The Village will do their best to try and find a new location for any sign affected.

The report continued with it being stated that the Planning Commission did not meet in March officially, but that the Tree Commission will meet next week.

Hoelzle then moved to stress to council and those present once again that the street project, numbered 8 and 9, will be very inconvenient for residents.

There will be a tentative schedule for the road work provided before the work takes place. There may also be a temporary one-way solution given for West Garfield.

The inconvenience comes from residents being unable to use their vehicles to go to their homes. Alternative parking will be needed for these residents due to this fact.

The road work will prevent vehicles from driving to the houses and, once the concrete is poured, it may take up to seven days before vehicles are able to travel on it.

CT Consultants are still working on the project and will hopefully give an update within the month.

Dale Black was then introduced to council. Mr. Black informed council that he will be opening a new brewery in town. The location will not be offering any food so outside food will be welcome.

The brewery will feature several kinds of beers, ciders, and mead. They will also promote local music and art. The location will be called Oncore Brewery and the hope is to open sometime in May or June.

Council then moved to enter into executive session at 8:01 p.m. before then moving to adjourn for the evening upon their return.