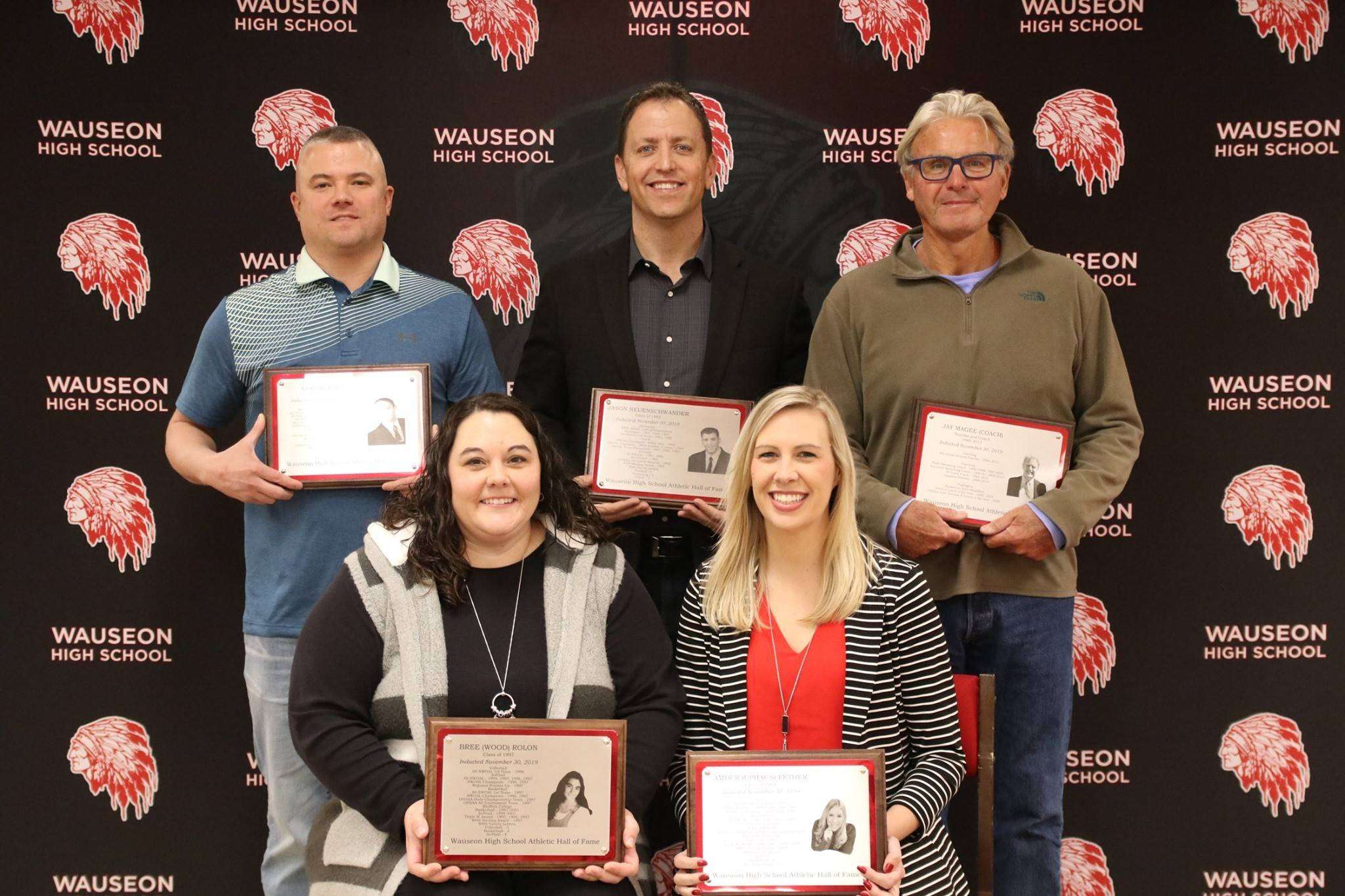 The newest members of the Wauseon Athletic Hall of Fame were welcomed in a ceremony last Saturday night between the JV and Varsity boys’ basketball game at Wauseon High School. The Class of 2019 is comprised of Jason Nuenschwander (’93), Gordie Frey (’95), Bree (Wood) Rolon (’97), Amber (Uphaus) Fether (’03), and teacher/coach Jay Magee (1980-2013).

The Wauseon High School Hall of Fame was established in order to recognize and honor those athletes, coaches, and others that have made outstanding and major contributions to the success and integrity of the Wauseon athletic program. The Hall of Fame committee has been meeting since the fall of 2006, with the commitment to enshrine those deserving members.

Each member was presented with a plaque by Wauseon Superintendent Troy Armstrong and that plaque will be duplicated and displayed at the high school. A reception honoring the inductees followed in the high school cafeteria.

Jason was a three-sport athlete at WHS and earned 10 varsity letters including three in football, four in swimming and three in track. Jason attended OSU where he earned a Bachelor’s Degree in Financial Management.

On the football field Jason played both offense and defense. As a junior he was all-NWOAL honorable mention for defense. In his senior year Jason was All-NWOAL 2nd Team as a defensive end and Honorable Mention tight end. He also earned all-District 1st Team and All-Ohio Special Mention as a defensive end.

Jason was best known for his accomplishments in swimming. He was a league champion in the 100-yard breaststroke as a sophomore, junior and senior. He was the sectional champion and was All-District 1st Team in the that event his junior and senior years. During his junior year Jason set the school record for the 100-yard breaststroke, which he still holds, and qualified for the state tournament.

Jason contributed to three NWOAL team championships that WHS earned from 1991-1993. Jason was a three-time Triple W award winner and in his senior year received the Sterling Award which is awarded to the outstanding all-around athlete.

Currently, Jason lives in Upper Arlington with his wife Jennifer and children Sela (9) and Sloane (6). Jason has worked for 20 years in medical device sales primarily in the Columbus and Cincinnati areas.  He works for Convatec Global Company.

He earned seven varsity letters including three in football, two in basketball and two in baseball. He extended his football career when he played in the inaugural season for Tri-State University (Angola, Indiana).

The 1993 WHS Indians won the NWOAL and regional championships in their undefeated 14-0 state championship season. In that junior season Gordie earned All-Ohio 2nd Team honors as a defensive back. One of his fondest memories of that season was his role as the placeholder for the winning field goal in the state championship game as they defeated Ironton 13-10.

As a senior in 1994, Gordie set 5 WHS school receiving records on a team that won another NWOAL championship with an 11-1 record as the regional runner-up. Those single season records include most receptions (71), most receiving yards (1,217) and most touchdown receptions (10).

Gordie and his wife Jill currently reside in Burlington, Ohio. He has been employed at UPS for over 18 years as an operations supervisor.

While at WHS, Bree excelled in volleyball, basketball, and softball. She earned 11 varsity letters at WHS, three Triple W awards, and the Sterling Award.

In volleyball Bree was All-NWOAL 1st Team and District 7 1st Team her senior year. She received All-Ohio Honorable Mention in 1996. Bree also received the Coach’s Award and the Lady Indians Intensity Award in 1996.

During Bree’s basketball career she showed great leadership as a two-year captain and earned four varsity letters. She led her team to a Division III State Championship in 1997. Bree was named All-NWOAL 1st Team and District 7 1st Team her senior year. She was also named All-District Honorable Mention and was named to the Division III State All-Tournament Team.

Bree’s softball career was also full of accomplishments and awards. She earned four varsity letters as a starter and with her solid defense and aggressive bat, Bree helped the Lady Indians win 2 NWOAL championships and a regional runner-up title.

This award was based on athletic prowess, academic excellence and leadership qualities displayed in her four years at Bluffton College. Bree graduated from Bluffton College in 2001 with a Bachelor of Arts Degree.

After college Wood returned to Wauseon and coached JV softball, junior high girl’s basketball and freshman volleyball for several years. She lives in Wauseon with her husband Ralph and their daughter Berkley and has worked at the Fulton County Health Department since 2014 in the fiscal department.

“I’ve played in countless games from junior high through college and I can remember my parents being at every game, and my dad at most practices even. I am grateful for my family’s support and encouragement through all the ups and downs, wins and losses”, said Rolon.

Amber earned 12 varsity letters in track, basketball and golf, won 4 Triple W Awards, and the 2003 Sterling Award, which is awarded to the outstanding senior athlete.

Amber received a Division I golf scholarship from Ball State University in Muncie, Indiana and graduated in 2007 with a Bachelor of Science degree in Apparel Design and Fashion Merchandising.

Amber earned 4 letters competing on the boy’s golf team which finished as NWOAL runner-up in 1999, 2000 and 2001 and were NWOAL champions in 2002. In 2002 Amber was All-NWOAL 2nd Team. She qualified all 4 years for the girl’s District golf tournament and was All-District 1st Team each of those seasons.

Amber competed and lettered in golf 4 years at Ball State University. She was selected as the top freshman golfer and was named a Division I All-American Scholar Athlete in 2004-2005. Amber was named to the National Society of Collegiate Scholars after her senior year.

Amber currently lives in Orlando, Florida with her husband Zach and two sons Logan and Dylan. She is a Costume Design Manager for Walt Disney Imagineering focusing on character programs and development.

Jay attended Ashland University for one year and was on their swim team. He graduated from the University of Cincinnati in 1978 with a Bachelor of Science degree in elementary education.

Jay’s first teaching assignment was at Vine Street Elementary in Cincinnati where he taught math for one year and coached the Walnut Hills High School swimming team. He and his wife, Nadine (Boyers), Magee moved to Wauseon in the fall of 1980 when he accepted a position as an 8th grade science teacher at Burr Road, a position he held for 33 years.

After retiring in 2013 Jay and Nadine moved to the beach in Ocean Ridge in South Florida. Jay spends his days in a variety of aquatic activities. His “Pooldaddy” moniker has been replaced with a new nickname, “The Chairman of the Beach.”

His children, Jay Magee and Cara Herman, are both teachers in Palm Beach County. Jay and Nadine have two grandchildren, Olivia and Tessa Herman, who are both swimmers.

Jay loves telling his neighbors about Wauseon, the people, the community, and life in a small town. He believes the support the citizens of Wauseon have for their children and schools is unparalleled.

Jay is thankful for his life experiences and the wonderful and exceptional people in Wauseon he worked with, taught, and coached over the years. Jay stated he is grateful and honored to be selected as a member of the Wauseon Athletic Hall of Fame.