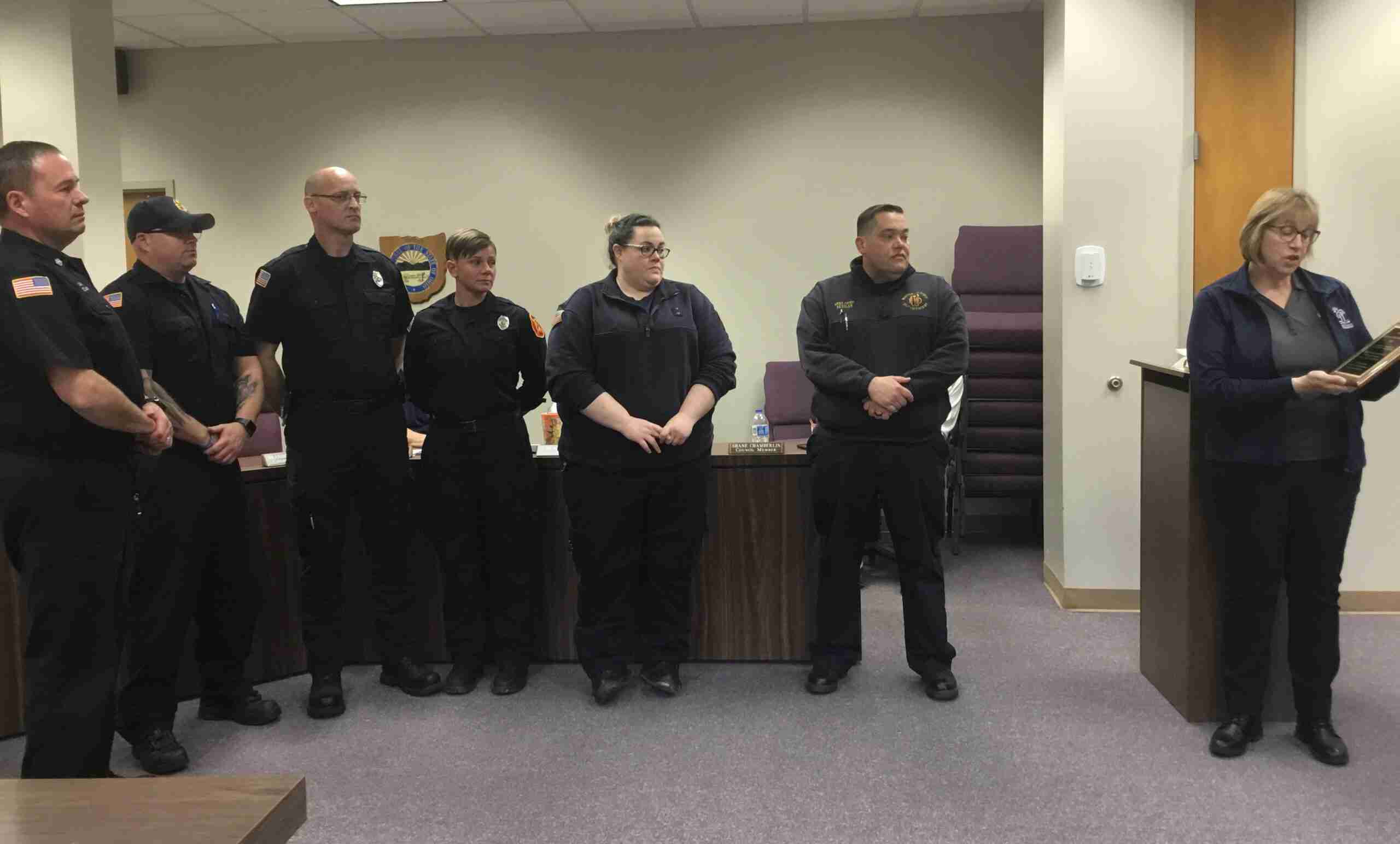 BIG THANK YOU … Fulton County Health Commissioner Kim Cupp presented a plaque to the Wauseon Fire Department at the April 18, 2021 Wauseon City Council meeting, on behalf of the Health Department and the Health Center. She thanked Chief Rick Sluder and the department for their “significant participation” at the Fairgrounds over January 21,2021-April 29, 2021, during the Health Department Vaccine Clinic. Present to accept the plaque were Chief Sluder, Andrew Sauder, Tim Newsome, Kara McCann, Danielle Peebles and Assistant Chief Phil Kessler. Cupp said they could not have operated the mass vaccine clinic at the Fairgrounds if the Fire Department had not assisted. (PHOTO BY REBECCA MILLER, STAFF)

Following the Pledge of Allegiance, moment of silence and roll call at the April 18, 2022 Wauseon City Council meeting, the Board voted to approve the minutes of the prior meeting.

Fulton County Health Commissioner Kim Cupp presented a plaque to thank the Fire Department for going above and beyond to help with the Vaccine Clinic.

Her report included the following points: audits only in 2019-20; nothing during 2021 due to COVID and funding; 2022 is first year they are doing compliance checks; have done store audits in which the HD staff works with Youth Advisory Council teens to review signage, pricing, products, etc. at retain establishments that sell tobacco, to collect data; compliance checks have an underage purchaser sent into a retail establishment that sells tobacco, while under the watchful eye of a plain clothes sheriff deputy, they attempt to purchase a tobacco product, intent is to see if store will sell to underage purchaser (Focused mostly on Wauseon for the grant with 11 of the 40 CCs in Wauseon).

Also, according to surveys FC youth are getting their tobacco products – 37% via someone else buying it for them, 29% borrowed from others, someone older gave it to them 15%, bought them 11%, took them from a family member 5%, purchased online 4% and some other way 27%;.

Good news she said is that Fulton County’s overall numbers of tobacco users amongst youth has slightly declined since 2018; in compliance checks there were two stores that were cited for violation of selling to underage; all stores who sell tobacco products were given a letter of education and signage for their doors; stores who were compliant received a Certificate of Compliance a few weeks after they were checked.

“The main goal is that the HD staff will work with retail store owners to create policy to help them,” she said. They are working toward having all store workers trained on what is allowed so that the young people of Fulton County are kept safe from tobacco products.

In Committee reports, Council President Scott Stiriz reported on the Tree Commission meeting which was held on April 11, 2022.

He said that Arbor Day for the Wauseon School tree planting is April 29, 2022, A Red Oak will be planted at 12:30 at the Primary School and an Autumn Blaze tree will be planted at the Elementary School at 2 o’clock. Tree city meeting is scheduled for May 11th and five of the Tree Commission will be attending.

Councilor Harold Stickley reported on the April 12, 2022 meeting of the Park Board. He explained that Tom Mangas is working on a fundraiser to raise money for new concrete tee-pads for the Disc Golf Course at Reighard Park. It is approximately a $10,000 project for 18 concrete tee-pads.

He also shared that the Park Board recommends that the city plant a Northern Fir Christmas Tree at the Railroad Park located on the east side of the Wauseon Depot. Following his report, council voted to approve the motion to plant that tree.

-First reading of: Ordinance 2022-3: An Ordinance Amending Ordinance 2022-1, An Ordinance Authorizing The Creation Of The Seneca Drive Incentive District Within The City Of Wauseon, Ohio; Declaring Improvements To Certain Real Property Within Such Incentive District To Be A Public Purpose; Describing The Public Infrastructure Improvements To Be Made To Benefit Or Serve The Real Property Within Such Incentive District; Declaring Such Property To Be Exempt From Real Property Taxation; Requiring Annual Service Payments In Lieu Of Taxes; Providing For Minimum Service Payments; Establishing A Municipal Public Improvement Tax Increment Equivalent Fund; And Providing Related Authorizations Pursuant To Ohio Revised Code Sections 5709.40(C), 205 5709.42, 5709.43, 5709.832 And 5709.85; And Declaring An Emergency.

-Resolution 2022-6 Resolution authorizing the mayor to enter into an agreement with FellerFinch & Associates, Inc. for Engineering Services

-Resolution 2022-7 Resolution authorizing the mayor to enter into an agreement with Peterman Associates, Inc. for Engineering Services

-Resolution 2022-8 Resolution authorizing the mayor to enter into an agreement with DGL Consulting Engineers, LLC for Engineering Services

Mayor Huner also read a letter naming Wauseon, Ohio a Tree City USA for the 29th year. Councilor Shane Chamberlin said that it would be nice if they could host the Tree City event during their 30th year.

Council voted to approve the payment of the bills and with no further business, the meeting adjourned.