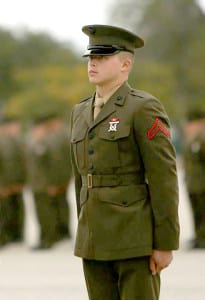 By: Mark Mercer – THE VILLAGE REPORTER

There is an old adage in the United States Marine Corps; every Marine, regardless of the type of job one does, is a basic rifleman. Recent Marine Corps Graduate Private First Class Zachary Schmidt proved he is more than capable of handling that responsibility.

PFC Schmidt was named Fox Company high shooter, earning a rifle score of 232 out of 250. A Marine Training Company consists of 6 training platoons, and PFC Schmidt posted the highest score out of all 6 platoons. Schmidt, a native of Wauseon, Ohio, graduated from Marine Boot Camp on November 15, 2013.

Marine Corps Rifle Marksmanship Training is the most intense portion of Marine Boot Camp, lasting two weeks. Each recruit receives individualized instruction on the M16A2 rifle for the first week of training, learning the functioning of the weapon and its capabilities, along with safe handling. The first week is known as “snap in” week, and recruits practice the principals of good marksmanship techniques. The second week of training is “firing week,” and each recruit fires the qualification course Monday through Thursday for practice before firing for qualification on the final Friday of training. The qualification course consists of five rounds each in a sitting, kneeling and standing position from 200 yards, followed by 10 rounds of rapid fire from that distance. Next, recruits move to the 300 yard line where they fire 5 rounds from a sitting position and 10 rounds rapid fire. Finally, recruits move to the 500 yard line where they fire 10 rounds from a prone position. Once complete, the shooter’s score is totaled up and the Marine earns a marksmanship badge based upon their score.

Mark Mercer can be reached at publisher@thevillagereporter.com