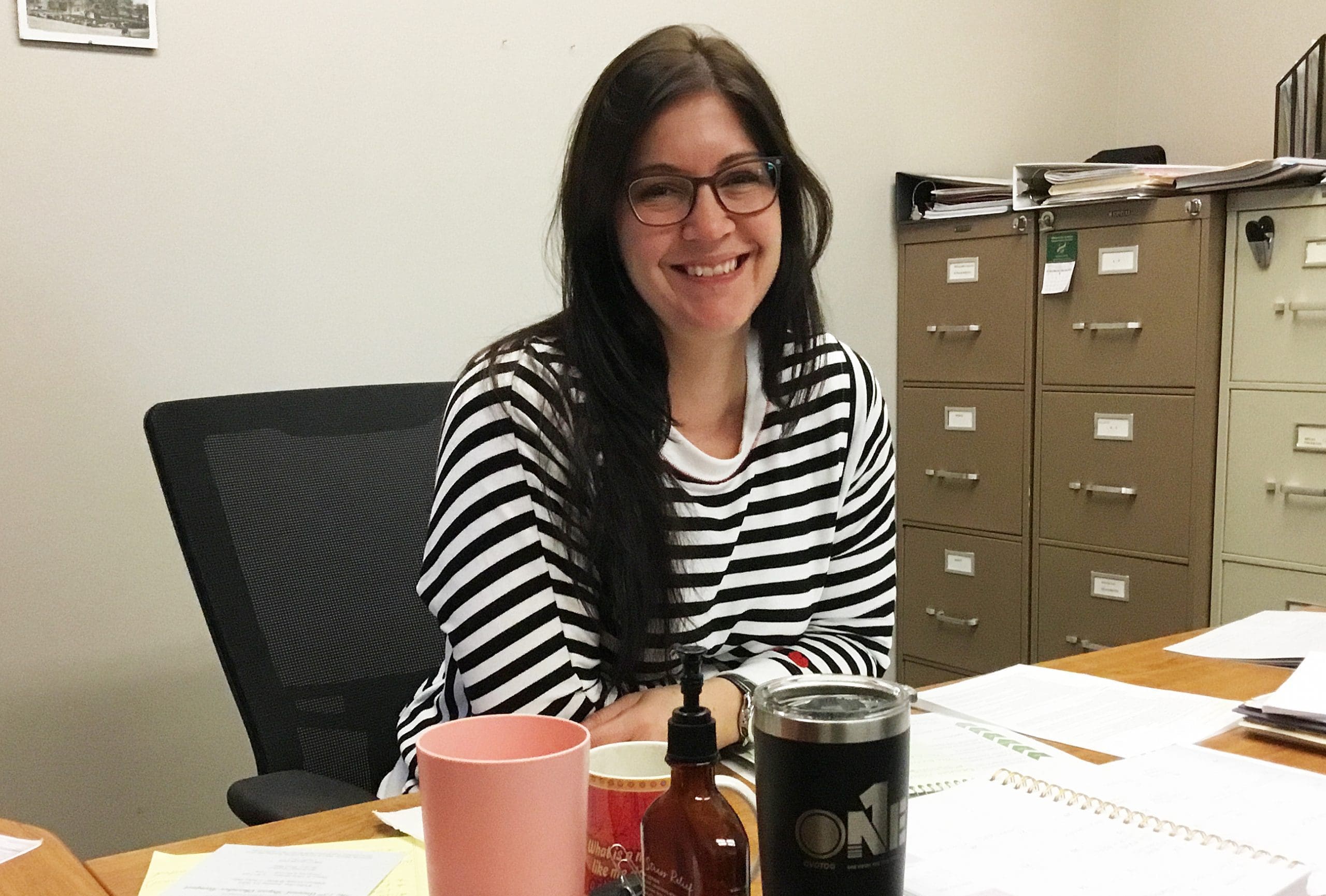 TAKING OVER THE OFFICE … Ashley Epling, who has moved into the WEDCO office located in the East Annex building in Bryan, is going through files and making hundreds of phone calls as she takes over in the position of Director. (PHOTO BY REBECCA MILLER, STAFF)

Ashley Epling is happily stepping into the position of director of WEDCO, Williams County Economic Development Corporation, which needed to be filled after former Director Megan Hausch and her husband moved to Wisconsin.

Megan was a well-known face all over Williams County as she was constantly working to grow the economy in every possible way.

WEDCO is an active organization which assists small and large businesses alike, whether they are established or just getting started.

Ashley has started the job with efficiency according to assistant Keira Christman. “She is doing an amazing job,” Christman said.

Everything is continuing, as Ashley spends her hours in the office with a desire to keep the ball rolling.

“WEDCO has already been doing a lot of great things and I want to continue that,” Epling said in an interview.

With the use of feedback she hopes to add new events and programs.

She also wants to continue strengthening WEDCO’s relationship with the community, industries and businesses.

Ashley was born in Houston, Texas and the family moved to Kunkle when she was three years old as that was her dad Jerry Miller’s hometown.

A 2002 graduate of North Central High School in Pioneer, Ashley went on to graduate in 2012 from Indiana Tech in Ft. Wayne, with an Associate’s Degree in Business Management.

She started working for Republic Services, the trash and recycling company located on CR G in Williams County, as a scale operator.

Over the years she has held multiple positions in the company. In 2009 she relocated to the Ft. Wayne division as their administrative assistant, transferred back in 2012 to work as operations dispatch in Bryan and in 2017 became a territory sales executive.

Epling saw in the paper that Hausch was moving away and that WEDCO would be needing a new director.

She had been at Republic for 16 years and was looking for “a career change that brought new challenges,” she explained, so she applied and was interviewed by the board.

“I already have a relationship with a lot of the industries in Williams County and the surrounding area,” Epling said, “so it seemed like a perfect fit.”

Christman has helped her as she gets settled in, but is making a change herself, as she moves on to Northwest State Community College to be an admissions recruiter.

Keira has worked for WEDCO for almost three years and has enjoyed the job, but is excited about her new position at NSCC.

Ashley will be hiring a new administrative assistant, but presently is, as Keira says, “Flying solo and doing fine!” Adding, “I am confident with where WEDCO is headed.”

Community involvement has been a big part of Mrs. Epling’s adult life.

She has been active with Bryan Chamber of Commerce for several years as a board member and volunteered before that.

She was also on the Bryan Girls Softball Association Board, as treasurer for four years, and was a coach.

She co-founded “Mentors for Williams County” in 2020 with A.J. Nowaczyk, and is pleased with how well that is going.

She is still involved in that, as vice president and says they are always looking for more mentors.

Ashley is married to Ken Epling, who is the regional operations manager for Grammer Logistics in Montpelier, Ohio.

Her 19-year-old daughter, Alisyn Shaffer, who graduated from Bryan last year, is attending NSCC for nursing.

She lives with her family in Pulaski “on a hobby farm with a menagerie of animals.”

As this area business woman has moved into the office and into the role of WEDCO director, she hopes to develop and grow WEDCO, reaching out to local businesses and communities to see what is being done well and what can be improved. Congratulations, Ashley!