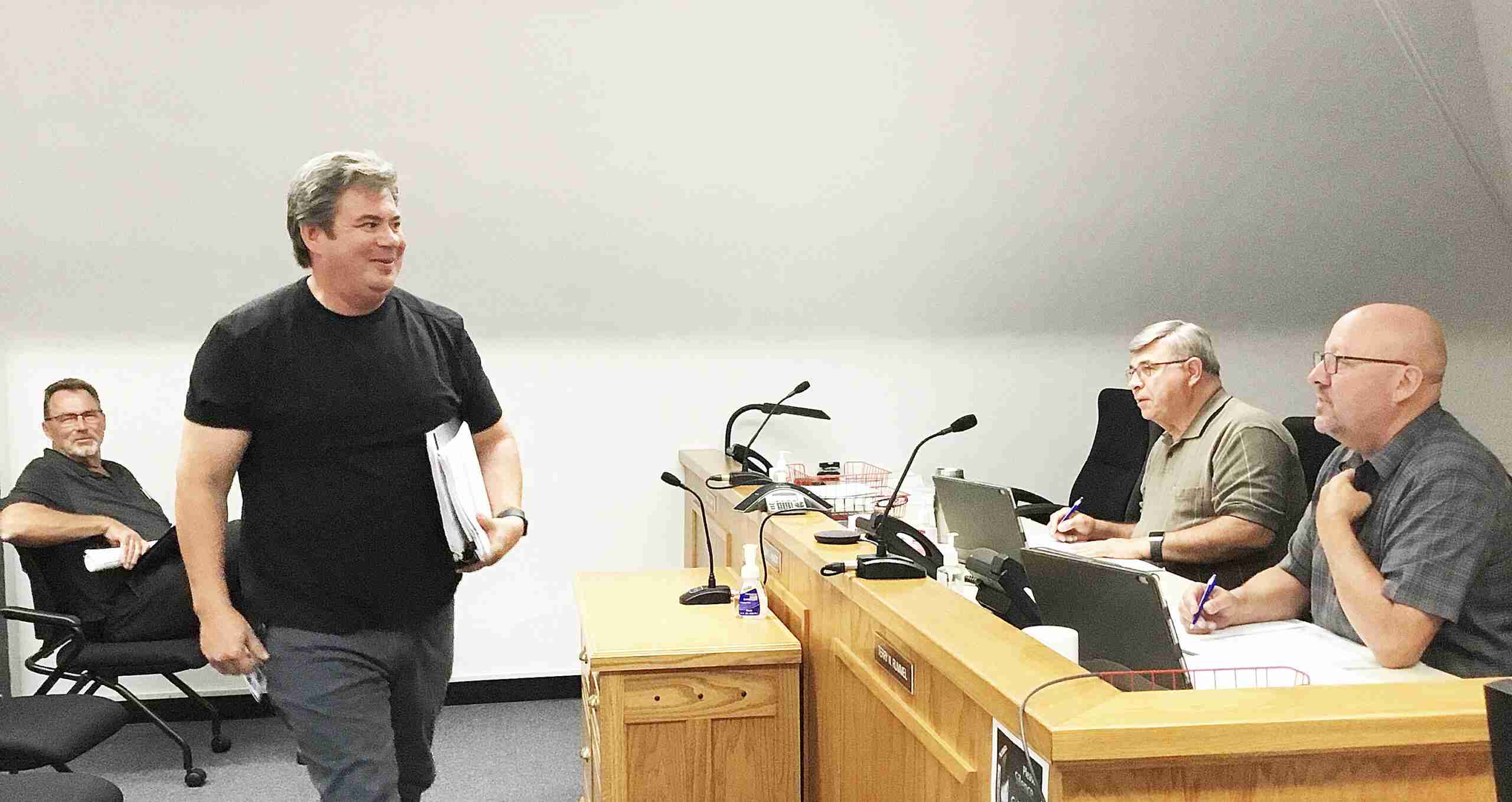 GOODBYE TO MANY THINGS … Williams County Commissioners Lew Hilkert and Terry Rummel said goodbye to JFS Director Fred Lord as he left the July 11, 2022 regular session after receiving approval for a JFS need. Seated behind Lord was Dave Page from the Fair Board, ready to request funds for the new Horse Barn project. These were the last two requests made of the commissioners before they began the move out of the Courthouse 4th Floor, for renovations. (PHOTO BY REBECCA MILLER, STAFF)

County Commissioners have been working with the Land Bank to make plans for the renovations of the fourth floor of the Courthouse as it is not in the greatest condition and needs extensive repairs.

On July 11, 2022, they met in the Commissioners’ Hearing Room for the last time before their rooms are cleared out in anticipation of the renovations. Preparations have been made in the East Annex (where Miller’s New Market used to be) to continue the business of the county.

During the July 11 regular session, the commissioners, Lew Hilkert and Terry Rummel (Brian Davis was not present) approved:

Rummel gave a short explanation on the replacement of the heating system in the Courthouse, and the quotes from Jay’s Plumbing and Heating.

He said that replacing the heating system in the whole Courthouse was not feasible so he had asked for quotes floor by floor. Further discussion is needed, but this was the first step in the direction of getting new units.

Following a half hour recess, they went into an Executive Session with JFS director Fred Lord, for collective bargaining matters.

When they came out of ES at 10:11 a.m., Lord requested that the commissioners approve a tentative agreement between ACSME and JFS and Williams County, as part of a collective bargaining agreement. A motion to approve the agreement was made and approved.

Dave Page, Senior Fair Board Director representative, was present to discuss the Horse Barn Project. He gave Rummel and Hilkert copies of the plans, stating, “Everything is finally all put into place.”

The state permit has already been secured and everything is drawn. The total for the building is $120,162.49, being a total of three quotes, minus the overhead doors. The plan is to purchase those after the fair.

The building will be used for harness racing during the fair and winter storage in the off season. It will be located by the other horse barn which runs north and south, with the new one running east and west, just south of it. The restrooms are close enough for state approval.

Page explained that the plan had been to re-erect the old trusses which were moved, but the state said they needed a permit and would not approve the rafters.”

“The Fair Board decided at that point to “start over and went back to the drawing boards.” They feel this new plan is “the cheapest route to go.”

Money is available from OHHA which will come in for part of it and they are selling things from the fairgrounds to raise some of the funds.

Some parts of the old barn will be re-usable and will save a little. Hilkert pointed out that the Commissioners had committed to $15,000 previously, and already paid a bill with that.

He asked what the plan is to fund the project, and Page said that was why he was there.

Discussion was held on ways to fund it, with possible help from other organizations being mentioned.

Hilkert pointed out that the commissioners “kicked in $15,000 for the upgraded HVAC system at the Gillette Building” and said that he feels they should “take this under advisement to see what funding might be available.”

It was mentioned that “fairly good money”, between $5000 and $10,000, comes in from harness racing as the state pays for just about everything on that.

Page said there is a grant that the Fair Board could apply for through the OHHA for around $20,000 and Hilkert suggested checking with the Fair Foundation as well.

It was agreed to “take this under advisement and meet with the Auditor to review where we are at present and the future and get back to Dave in 30-60 days.”

The commissioners told him that they appreciate the work that the directors are doing. He was encouraged to apply for the grant and consider contacting some major industries throughout the county to see if they would help contribute.

With no further business, the regular session adjourned. The commissioners met later that morning with Treasurer Kellie Gray for a Land Bank discussion in the Commissioner Conference Room.