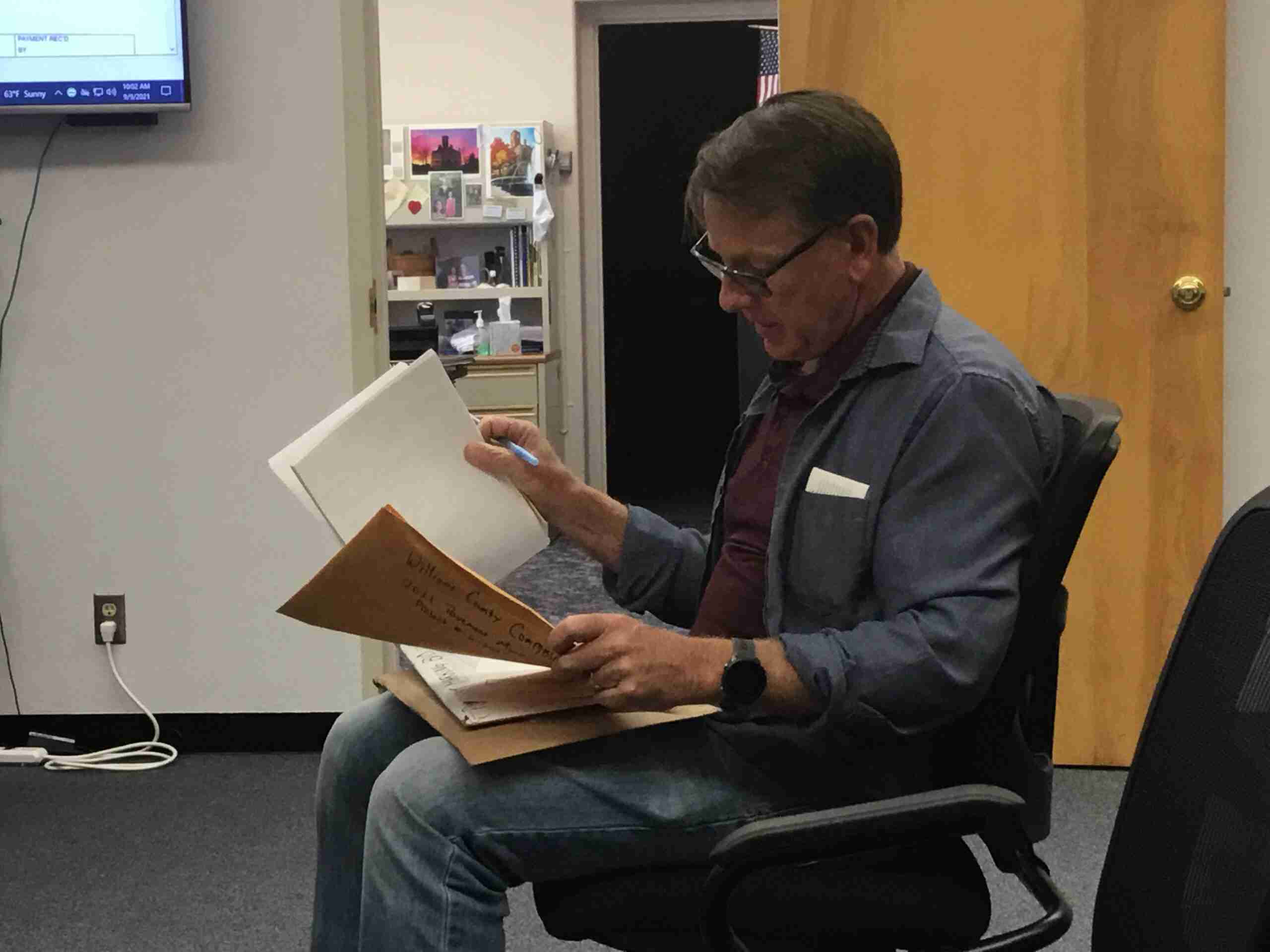 BID OPENING … Williams County Commissioner Todd Roth opened three bids on September 9, 2021 before the regular commissioners meeting. They were for the Pavement Marking project. Roth was also present at the meeting to give updates on Bible Park and NORTA. (PHOTO BY REBECCA MILLER, STAFF)

Williams County Engineer, Todd Roth, told the Commissioners at the Thursday morning, September 9, 2021 meeting that he wanted to give them his take on the condition of Bible Park as there had been some negative conversations in social media about it.

“I have received some calls that there have been some comments on social media related to the condition of Bible Park,” Roth began. “We have discussed it at our Park Board meeting.”

“We realize that Bible Park needs work and some improvements. It has been somewhat neglected and we get that. There are some things that need to be done.” He went on to say that the bridge needs repair and the ponds need to be rehabilitated.

“Getting rid of the algae on the ponds isn’t just a simple task,” he stated. “We have to think long term. We could put something out there to try to stir the water up but dry season with no flow and no depth in the pond, plus the high temperatures we have had have caused it to have this problem.”

“What needs to happen is that the pond needs to have some depth put back in it and an aeration system of some kind has to be put in the pond. I am not trying to make excuses for the condition out there. I just want to be sure everyone understands the whys.”

One of the reasons they have not gotten to Bible Park is the focus they have had on getting the Disc Golf Course finished at Opdyke Park.

They are a week or two away from being finished and it will be ready to open in October as was planned. At that point they will be free to focus on Bible Park and hope to repair some of the shelters, work on the pond, the bridge and the trails.

The Park Board will come up with a plan and return with it to the commissioners and then they will have to determine how to pay for it. “I understand, I get it, and we will take care of it,” he ended his report.

Commissioner Brian Davis asked how much it would cost to do all that he had mentioned for Bible Park and said that he thinks they could do some matching funds from the State Capital Improvement Fund.

Roth said that he is hoping to get with people from Soil and Water as they are meeting with a contractor soon, who is familiar with ponds, and he could get an idea of what they need to do.

He wants to get in touch also with a Pond Expert as he has not been able to locate the original plans to determine what the depth was. He is concerned that if they try to dig it deeper without expert assistance they might accidentally dig through the clay base and then the pond would leak out.

Commissioner Lew Hilkert gave him information on someone who fits that description with whom he can get in contact. He mentioned that he had been working with a student from Defiance College and took depths and it was between three and seven feet, not much depth to it.

It definitely needs aeration of some kind also and not long ago they looked at putting some workout stations for park visitors to use that would put air out into the pond, such as a stationary bike.

He said he isn’t sure if the is the right answer and that most likely it will need an aeration system that is either wind, solar or electrically powered for the long term solution.

The commissioners asked him to have estimates to them by November first so that they can put together a proper package for the capital budget.

It was agreed that the bridge is an important part of that park as so many people like to use it for pictures and special events. Roth informed the commissioners that they are taking out a truss bridge next year, on the Bridge Partnership Program funded by ODOT, and they will be keeping the trusses as they are still usable.

He hopes to use those to raise and repair the Bible Park Bridge. “Ultimately, the Park Board’s goal is to put a dock in on the east pond so that people could take kayaks and canoes if they wanted to take the family to learn how to do that.

It is close to the parking long and is a somewhat small area to practice in. They could also go from one pond to the other,” Roth shared.

Roth also told the commissioners that he believes the Park Board should be meeting with them on a regular, at least bi-annual, basis. They have a master plan and need to update it and present it to the commissioners so they are aware of the plans.

He also shared slightly about NORTA, Northwest Ohio Rails to Trails, which recently held a ribbon cutting in Montpelier for the connection of Wabash Cannonball Trail and the Iron Horse Trail. Roth said that NORTA’s attorney, Ed Snyder, and WC Prosecutor Katie Zartman, have both approved the paperwork.

Hilkert asked Roth to set up an “event” for the paper signing that would be done simultaneously with Montpelier and the Commissioners. At that moment, Snyder would be signing off the paperwork to Montpelier and to Williams County.

Some other paperwork, which transfers Opdyke Park from Hillside County Home on the deed, to Williams County Park District, was also mentioned and Roth said he will get on getting that completed as well.

The Commissioners heard Bid Openings for Paving Marking with three bids opened by Todd Roth: The Estimate was $67,075.50 and American Roadway Logistics out of Norton, Ohio bid $72,439; Aero-Mark Company out of Streetsboro bid $64,457.04; and Griffin Pavement Striping out of Fremont, Ohio bid $71,876.

In regular business that day, the commissioners voted to approve:

-Minutes for September 2, 2021 and payment of bills as submitted by the auditor

Commissioner Hilkert reported that he attended the annual renewal meeting of CEBCO and was happy to announce that they had a 0% increase this year.

“As you recall, in the past we have had some significant increases in our medical insurance,” Hilkert said. “Two years ago it was like 10% and last year around 5 or 6 %.”

The reasons for the 0% increase were that the county’s high claims have dropped and the CEBCO Board also voted to put $10 million of the equity into the pool to buy down the rate.

Commissioners Terry Rummel and Davis thanked Hilkert for his faithful attendance of those meeting and keeping them informed.

Following a short recess, the commissioners went into an Executive Session for compensation, with no action taken. With no further business, the session ended for the day.