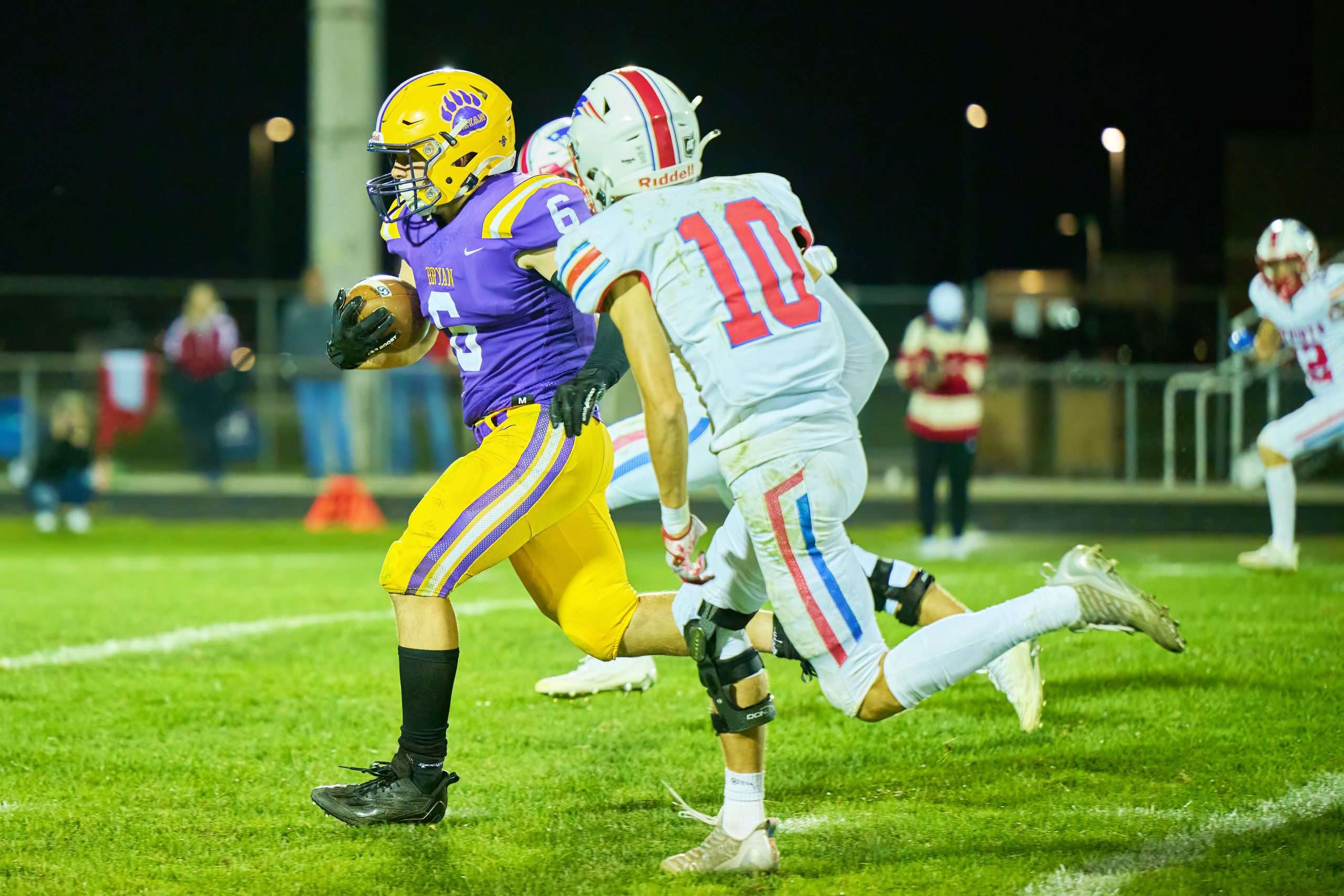 BIG NIGHT … Bryan running back Sam Herold breaks away on a fourth quarter carry. Herold had 265 yards and three touchdowns on the night. (PHOTO BY RICH HARDING, STAFF)

BRYAN- Bryan jumped out to a 28-0 lead and then held on for dear life to prevail over Patrick Henry, 42-35.

Bryan seemingly had the game well in hand after Sam Herold’s 34-yard TD run gave Bryan a 42-20 lead with 2:05 left in the third quarter.

But after Patrick Henry took over on downs at its own 35, Nash Meyer’s nine-yard TD pass to Aiden Behrman on fourth down, cut Bryan’s lead to 42-28.

Jackson on fourth-and-5. Meyer then ran in the two-point conversion to cut Bryan’s lead to 42-35 with 7:33 left in the game.

Things got even closer after Patrick Henry forced a Bryan punt and took over on its own 38-yard line with 1:57 left.

First Meyer completed a 17-yard pass to Landon Johnson. After throwing a 21-yard completion to Jeff Camp, Meyer rushed for seven yards to put Patrick Henry on the Bryan 17-yard line, setting up a second-and-3

But the Bryan defense sacked Meyer for a five-yard loss and then a 10-yard loss.

Then on fourth-and-18 yards to go, Meyer threw an incompletion and Bryan took over on downs with 30 seconds left.

Bryan then went into victory formation and Bryan quarterback Jace Kepler, who rushed for 113 yards on 20 carries, took a knee on the final play of the game.

“We worked on our mistakes in practice this week and I told the guys you need to believe in yourselves and play for each other as a team and that’s what they did,” said Bryan coach Grant Redhead.

“It got a little closer at the end than I wanted, but they’re a good team and made some plays. But our defense was able to come up with pressure at the end.”

Bryan’s running game was in high gear in the first half alone, rushing for 211 yards in the first two quarters. Meanwhile, Bryan’s defense had held Patrick Henry to one first down, as Bryan jumped out to a 28-0 lead with 7:05 left in the first half.

With the passing game now working, Patrick Henry took the second half kickoff and quickly scored to cut into Bryan’s lead a little more.

Herold broke loose for a 34-yard gain and Kepler then scored on the next play, from 14 yards out and Bryan padded its lead to 35-14 with 10:01 left in the third quarter.

Both teams then traded scores and after Herold’s 34-yard TD, Bryan held a 42-20 lead after three quarters, setting up the dramatic finish.

“Patrick Henry came in with one of the best defenses in the league, (allowing just 21 points in its first five games), but the coaches worked us hard all week in getting us ready,” Herold said.

“Our offensive line did a great job, opening up big holes for me. And our defense although giving up some yards, came through when they had to and that’s all you can ask for.” Herold said.

The game turned out to be two different kinds of offenses paired up against one another.

While Bryan finished with 351 yards rushing, Patrick Henry quarterback Meyer completed 24 of 38 passes for 357 yards. Patrick Henry is now 3-2 overall and 2-1 in the NWOAL.