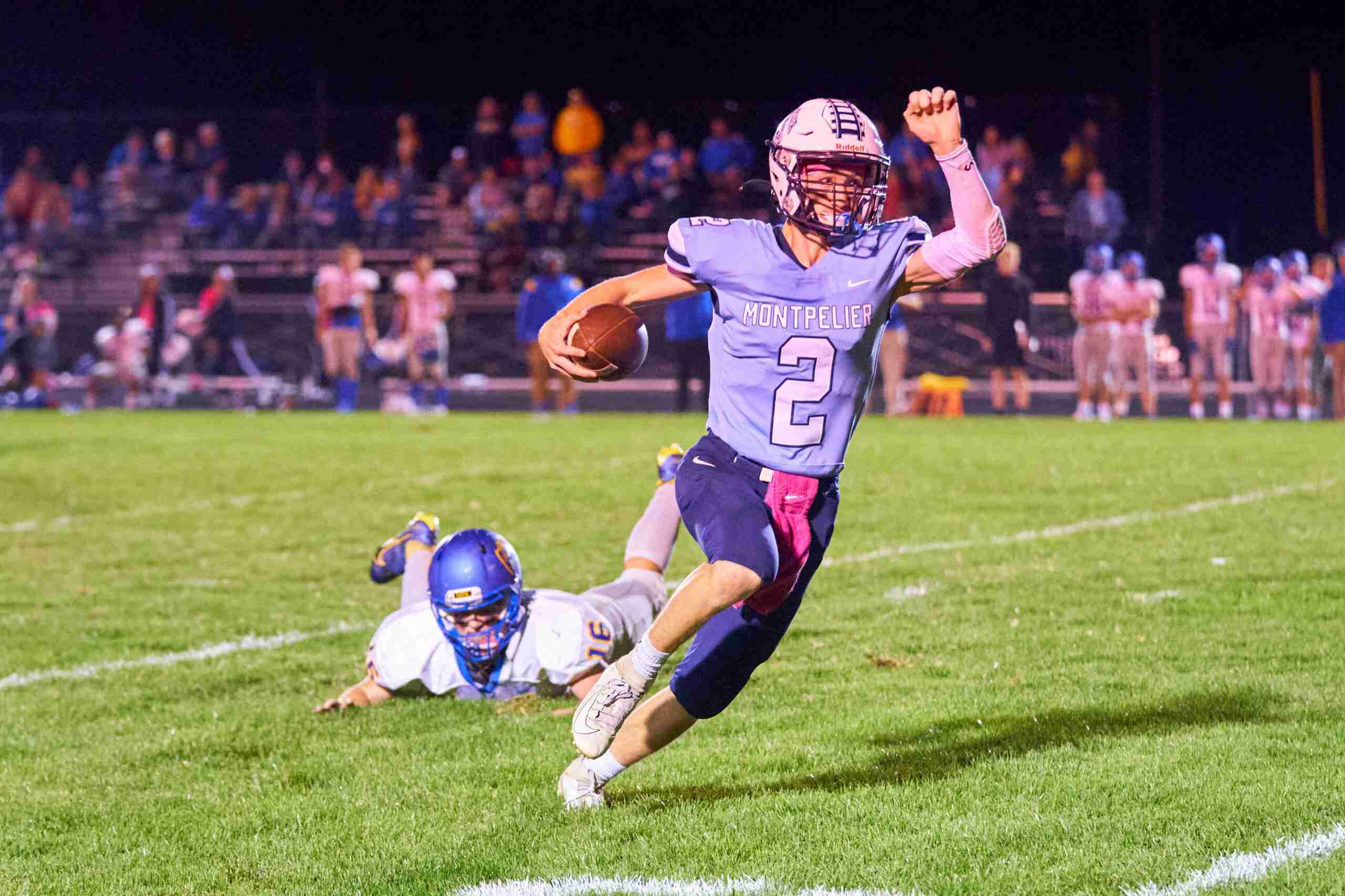 MONTPELIER – Late in the first half, Northwood held a comfortable 20-0 lead. But Montpelier looked to be right back in it, moving to a first and goal at the Northwood two-yard line.

However, the Northwood defense came through, stopping Montpelier on the one-yard line on third and fourth downs. That preserved a 20-0 halftime lead for the Rangers.

Next, on the first play of the second half, Northwood’s Alex Howe returned the kickoff 82 yards for a touchdown and suddenly, after Mickey Asad’s two-point conversion run, Northwood held a 28-0 lead.

“That goal line stand was huge,” said Northwood head coach Ken James. “If they score there, that turns the whole game around.

“They’re within two scores and then if they try an onside kick to start the second half and recover it, we’ve got a ball game.”

“But instead, our defense stopped them and then, Alex (Howe) did a good job of finding the hole on the kickoff and returned it for a touchdown. That got us going with a four-touchdown lead.”

Next, Montpelier quarterback Landon Brigle’s pass was intercepted, setting up another Northwood score. The result was a two-yard touchdown run by Braden Alore, that put Northwood up, 35-0.

Northwood’s last touchdown was set up by Howe’s 19-yard punt return to the Montpelier 14-yard line. The Rangers then scored on the very next play, on Asad’s 14-yard TD run. That pushed Northwood’s advantage to 42-0.

“Northwood is at the top of our league, year in and year out and I thought for the most part our kids played hard against them, their effort has never been questioned,” said Montpelier head coach Joe Brigle.

“On that play near the goal line where Jacob Lamontagne was stopped on fourth down, our guys liked the play call and I thought it was a good call. But credit Northwood’s defense. They made the play.”

“Along with that kickoff return, they intercepted a pass on a ball that should have been caught (for a first down). But we’re getting better each week, we just have to finish drives (when we’re in position to score).”

With Northwood leading, 42-0, Montpelier was finally able to finish a drive with a score, on Lamontagne’s three-yard TD run, to bring the final score to 42-6.

Early in the game, Montpelier’s defense did a good job of stopping Northwood’s ground attack. But Northwood quarterback Mason Smith opened things up with the passing game.

On its second drive of the game, with third down and seven yards to go from its own 44, Smith hit A,J. Cruz with a 13 yard pass to the Montpelier 43 yard line. Three plays later, Smith connected with Cruz on a 16-yard TD pass to put Northwood up, 7-0.

On Northwood’s next drive, Asad scored on a 15- yard run which followed Asad’s 34-yard run to the Montpelier 16-yard line.

Northwood’s lead then grew to 20-0 on Smith’s 46-yard screen pass to Zeagan Byington that went the distance. The play came with Northwood facing second down and 17 yards to go.

Montpelier than put together a 12-play drive, moving to a first and goal on the Northwood two-yard line, on Landon Brigle’s 10-yard pass to Lamontagne. That’s when the Northwood defense made its key stop.

For Northwood (3-2 overall, 2-0 in the TAAC), Smith was 4/4 passing, for 112 yards and three touchdowns. Asad led the Rangers ground attack with 66 yards on five carries.