WILLIAMS COUNTY GAME OF THE WEEK: Liberty Center Improves To 7-0 By Rolling Past Bryan 49-7 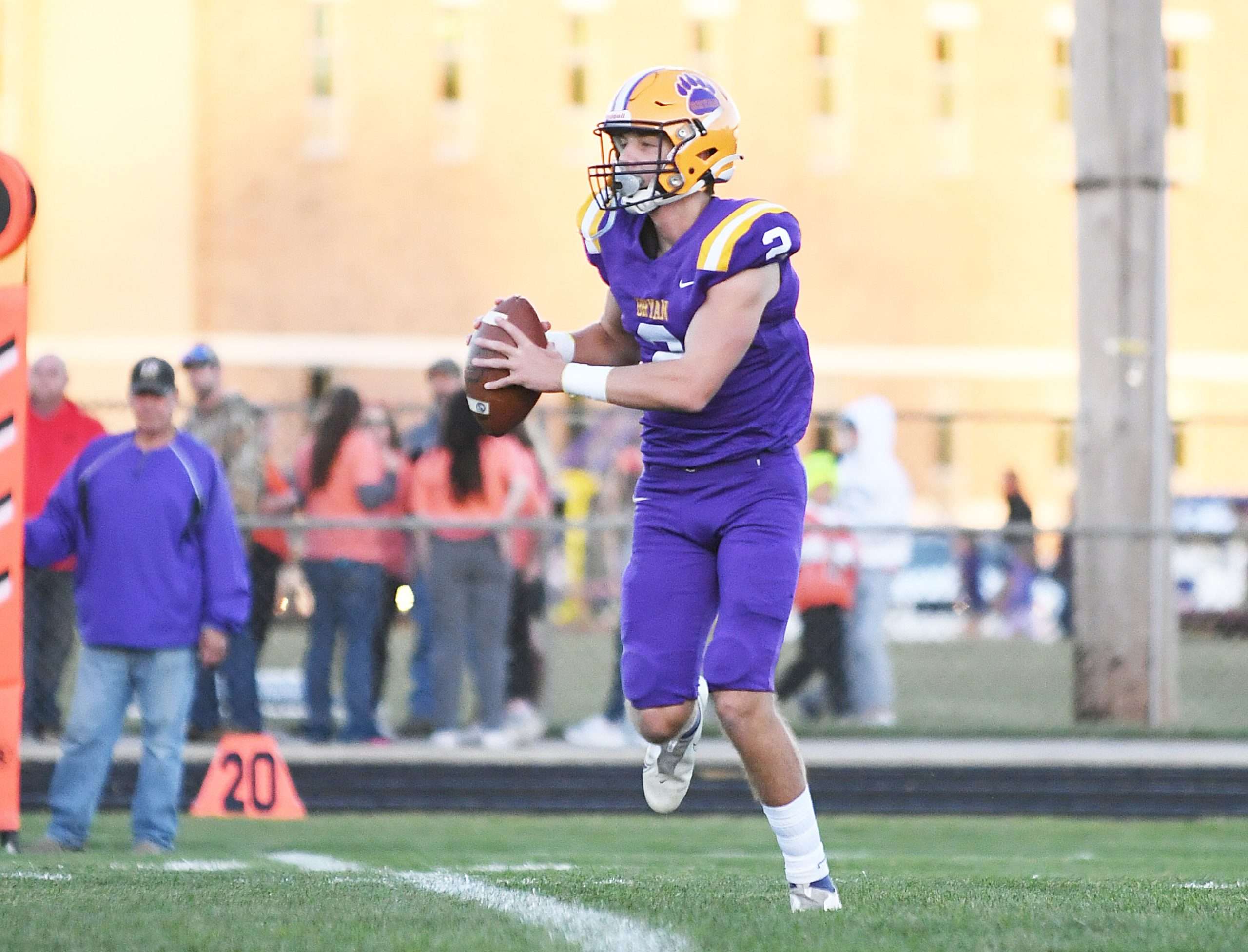 LOOKING DOWN FIELD … Bryan quarterback Jase Kepler rolls out to throw a pass in the first quarter. (PHOTO BY LINDSAY PHILLIPS)

“We took a beating this week,” said Bryan head coach Grant Redhead. “We have to work on cutting down our mistakes and get better for next week’s game.”

“The sun will come up and we’re a family. We’ll stick together and keep working to get better.”

Liberty Center rushed for 435 yards for the night, in a game that was played the entire second half with a running clock.

Liberty Center running back Matthew Orr was the main thorn in the Bryan side, rushing for 235 yards on five carries while scoring four touchdowns, all in the first half.

After forcing a Bryan punt on its first possession, Liberty Center took just one play to score.

Taking over on its own 40 after the Bryan punt, Orr broke through a massive hole and ran virtually untouched for the 60-yard touchdown.

Bryan, thanks to a 29-yard pass completion from Jase Kepler to Brody Devlin, moved to a first down on the Liberty Center 38.

But the Tigers defense forced two incompletions and Liberty Center took over on downs, on its own 31-yard line.

From there Colton Kruse rushed for seven yards and then Orr broke loose again, breaking through another massive hole and rushing 62 yards for another TD to put Liberty Center up 14-0.

“This was probably the best we’ve executed in our run game and that opened up our passing game and (quarterback) Zane (Zeiter) was able to execute that,” said Liberty Center head coach Casey Mohler.

Zeiter completed eight of nine passes for 101 yards, including two touchdown passes. Those came on Liberty Center’s next two possessions, a 17-yard TD pass to Colton Chambers and a 37-yard TD strike to Kolton Cruse. Those two scores gave Liberty Center a 28-0 lead.

Bryan was finally able to score on the ensuing kickoff, an 85-yard kickoff return by Brody Devlin. That cut Liberty Center’s lead to 28-7.

“There was great blocking on the play, and I found a hole,” Devlin said.

“The last guy I had to beat was the kicker. I saw him out of the corner of my eye and when I got by him, I knew I was good (for the touchdown).”

On Liberty Center’s next possession, Zeiter broke loose for a 47-yard gain.

A penalty on the play moved the ball back to the Bryan 35. One play later it was Orr again, racing virtually untouched for a 34-yard touchdown, to put the Tigers up, 35-7.

That didn’t matter though as Orr went virtually untouched again, racing 74 yards for a touchdown on the final play of the first half to put the Tigers up at halftime 42-7, forcing a running clock for the second half.

The Liberty Center defense, thanks to a strong defensive line, held Bryan running back Sam Herold to 36 yards rushing in the first half, while holding Bryan quarterback Jase Kepler to 15 yards rushing and just three for 10 passing, for 32 yards.

“Our interior three (defensive line) have been stout all season,” Mohler said.

“We were able to make Kepler uncomfortable while looking to pass and our defensive backs did really well in coverage.”

Liberty Center received the second half kickoff and drove 63 yards in eight plays, with Trenton Kruse scoring a TD from 21 yards out. That brought the final score to 49-7.

Dameon Wolfe was next for Bryan with 54 yards on six carries.